Don't Applaud. Either Laugh or Don't. (at the Comedy Cellar.) (Paperback) 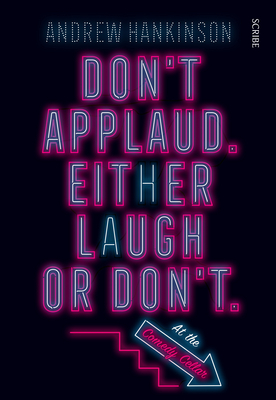 This is a book about three things:
1. A room called the Comedy Cellar.
2. Who gets to speak in that room.
3. What they get to say.

The Comedy Cellar is a tiny basement club in New York's Greenwich Village. Run according to the principles of its owners, the Dworman family, it became a safe place for stand-ups to take risks and experiment. Superstar comedians such as Amy Schumer, Dave Chappelle, Jon Stewart, and Louis CK became regulars, celebrities started to hang out, the club hosted debates, and everyone was encouraged to argue at its back table. Then the Comedy Cellar ended up on the frontline of the global culture war.

Andrew Hankinson speaks to the Cellar's owner, comedians, and audience members, using interviews, emails, podcasts, letters, text messages, and previously private documents to create a conversation about who gets to speak and what they get to say, and why. Moving backwards in time from Louis CK's downfall to when Manny Dworman used to host folk singers including Bob Dylan, this is about a comedy club, but it's also about the widening cultural chasm.