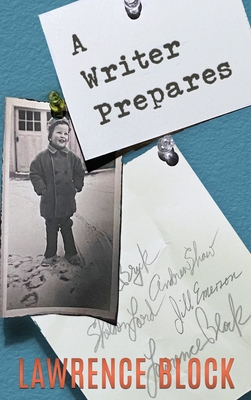 Sometime in 1953, I knew with unusual certainty what I intended to do with my life. I would become a writer.

I was then 15 years old, and the next several years were to prove eventful. I went to college, I got a summer job at a literary agency and dropped out of college to keep it, I sold two dozen short stories and articles to national magazines, and I completed a novel.

By the time I was 25, I had a wife and two daughters and a house in a suburb. I had published over fifty books. Most of these bore pen names, and for a time I resisted acknowledging my early pseudonymous work. Then, in one astonishing and feverish week in 1994, I recalled those early years in fifty thousand words of memoir.

A publisher contracted to bring out my memoir once I'd completed it. Instead I put it on a shelf and never looked at it again, and after a few years I bought it back from the publisher.

Early in 2020, I had a fresh look at A Writer Prepares. Then I went back to work. It would occupy me, off and on, for the balance of the year. By the time I was ready to stop, I'd written about my life as a writer well into 1966, when I'd completed The Thief Who Couldn't Sleep; it was the first of eight books I would write about a fellow named Evan Tanner.

According to A Trawl Among the Shelves, Terry Zobeck's exhaustive bibliography of my work, 2020 also saw the publication of my 209th book, Dead Girl Blues. It has been a long life, and seems to have been a busy one. A Writer Prepares is, for better or for worse, an undeniably curious book.

My wife, a casual student of hagiography, loves the story of the church officials who took a long-delayed inventory of their collection of relics. They were surprised to discover that they possessed not one but two heads of John the Baptist. How could this be? They considered the matter until the explanation became clear: one was John's head as a young man, the other his head as an old man.

A Writer Prepares, an examination of the first quarter century of a writer's life, is the work of two writers. There's the middle-aged fellow who wrote about half of it at a blistering pace in 1994, and there's the octogenarian who finished the job another quarter century later. The older fellow brought less raw energy to the task, and his memory is a long way from infallible, but one can only hope he's offset these losses with a slight edge in judgment, in perspective, in maturity. (I was about to add wisdom, but that might be a bridge too far.)

I suspect this book's natural audience consists largely of those of you who are already enthusiastic readers of my work. And it seems likely that the book will get a favorable reception from persons who are somewhere in the process of finding themselves as writers.

But I'm happy to let the the book find its true audience. A very comforting aspect of publishing A Writer Prepares now rather than twenty-five years ago is that I'm so much less invested in its reception.