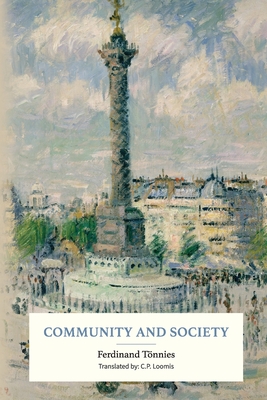 Community and Society, or Gemeinschaft und Gesellschaft, is a study of the spectrum of prototypical social groups as identified by German sociologist Ferdinand T nnies. First published in 1887, the work explores the relationship between community-based organizations and society-based organizations, and the human will that lies beneath each.

Ferdinand T nnies was born in Schleswig in 1855, then under Danish rule. The third son of a wealthy farmer, T nnies studied at the universities of Strassburg, Jena, Bonn, Leipzig, and Berlin, before receiving a doctorate in philology (the study of languages) from the University of T bingnen in 1877.

The world around him was experiencing massive upheaval during T nnies' early years. His own home of Schleswig changed hands from Danish to Prussian rule in 1864. Further, the Industrial Revolution radically altered the nature of city life, country life, and the relationships between the two. Within just 20 years, Prussia and Germany went from two-thirds rural and one-third urban to the complete reverse.

By the time of his graduation, he had developed a new interest in political philosophy and sociology. Free from the need to earn a living by his family money, T nnies wrote extensively for professional journals and political periodicals. He published over 900 works throughout his life. But his best-known contribution is Community and Society, which he began to write at just 21 years old.

The ties that bind Gemeinschaft-leaning communities include mutual bonds and feelings of togetherness. They exist more strongly in families, neighborhoods, and religious communities. On the other side, Gesellschaft societies are more impersonal, held together by the members to meet individual goals. These connections are often self-interested and may have monetary or political ends, such as corporations, states, or certain social clubs.

Beneath each grouping lies the two types of human will, Wesenwille (essential or natural will) and K rville (arbitrary will). In the expression of natural will, an individual will see himself as a means to serve the goal of the group. The group, and relationships within that group, are the purpose. But in the expression of arbitrary will, the individual's actions within the group are meant to further that person's goals. The group is merely a means to an end.

The ultimate conclusion? Man is a social being whose motivations are always a combination of Wesenwille and K rville. Individuals will live in personal communities of kinship, and will also form new kinds of associations to meet their ends.

Although the book wasn't wildly successful in its first edition, a second 1912 edition experienced lasting popularity among students of sociology.

Throughout the rest of his career, T nnies wrote and taught about sociology, social change, public opinion, and technology. He co-founded the German Society for Sociology in 1909 along with eminent sociologists Rudolf Goldscheid, Max Weber, and Georg Simmel. T nnies served as the first president of the group but was ousted and lost his professorship at the University of Kiel in 1933 after criticizing the Nazis. He passed away 3 years later in 1936 at the age of 81.