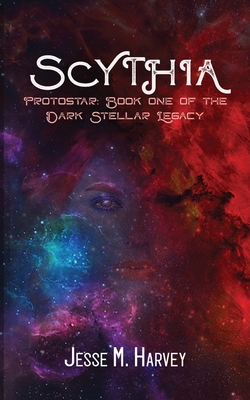 Scythia: Protostar is the first book in the Dark Stellar Legacy series. It is a new pulp style adventure. Strap in because this series is a wild ride out among the stars. There are psychic psychopaths, deep space colonies, and demon summoning cults. As we explore feral frontier worlds and hyper tech hive planets, we will learn more about the dark empire, magic wielding aliens, and ancient prophecies.

In our first installment:

An ambitious bureaucrat has brought together an unusual team to help him rise in power. In a world so dark that the only way to get ahead is by taking them. He has worked hard to gain the loyalty of the cunning and beautiful, Raza. He has found Uthraith, the deadliest headhunter from the far feral reaches of space. It took months of searching but he finally caught Djaem, the best hive-master rogue in the inner-sectors. And at last... he found it... His secret weapon. Scythia, a broken psychic from the Citadel.

Can this batch of imperial criminals, cooperate long enough to complete an assignment? Only time will tell.

Join them on their first mission, as they are sent to a hive mining colony to gather Intel and contain a Tyrling demon. Now he just as to hope that they will return intact with the colony still standing.