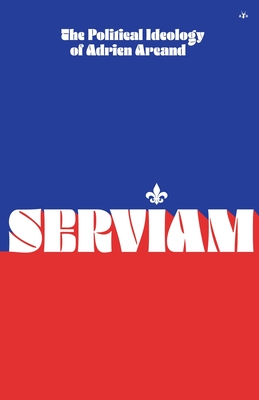 "Keep your spirits clear and lucid, tear off the masks of your tormentors, and fanatically serve the truth. Our struggle began long ago, and what we have sown will not be uprooted, since the children of our children will reclaim the torch for the great glory of Christ. Remain strong and united. Do not fear death or your adversaries. Human works are temporary."Adrien Arcand

Originally compiled and published by Reconquista Press in 2017, Serviam: The Political Ideology of Adrien Arcand presents an anthology of the beliefs of this great journalist, thinker, and leader so dubbed The Canadian Fuhrer. Arcand (1899-1967) led the Canadian fascist movement as a fervent Catholic and Quebecois. The selected speeches and writings within Serviam are not constrained merely to the French Canada of the 1930s through the 1960s, although his response to the competing contemporary ideas is present, but his responses are universal. Arcand concisely and clearly offers critiques of communism, liberalism, materialism, etc. out of love for his people and God. Both a fascist and Catholic, Arcand pulls no punches in critiquing the state of Canadian government and Church leadership. Adrien Arcand demonstrates in his writings that he is first and foremost a servant of God, which informs his entire political philosophy. The title Serviam (meaning "I will serve") refers to the cry of St. Michael made in response to the rebellious call of Satan, "non serviam" or "I will not serve."

Complete with a preface, essay, and biography by three modern authors, Antelope Hill Publishing is proud to present Serviam: The Political Ideology of Adrien Arcand for the first time in English, translated from French by D'Entremont.