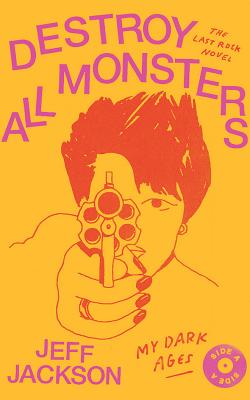 By Jeff Jackson, Sophie Amoss (Read by), James Patrick Cronin (Read by)
$27.99
Possibly out of print. Email or call to check availability and price.

"At some point, I began to think of it as an ancient folk tale. It's fine work, with a kind of scattered narrative set within a tight frame. Fast-moving throughout―fragile characters who suggest a bleak inner world made in their own collective image." ―Don DeLillo

An epidemic of violence is sweeping the country: musicians are being murdered onstage in the middle of their sets by members of their audience. Are these random copycat killings, or is something more sinister at work? Has music itself become corrupted in a culture where everything is available, everybody is a "creative," and attention spans have dwindled to nothing?

With its cast of ambitious bands, yearning fans, and enigmatic killers, Destroy All Monsters tells a haunted and romantic story of overdue endings and unlikely beginnings that will resonate with anybody who's ever loved rock and roll.

Like a classic vinyl single, Destroy All Monsters has two sides, which can be read in either order. At the heart of Side A, "My Dark Ages," is Xenie, a young woman who is repulsed by the violence of the epidemic but who still finds herself drawn deeper into the mystery. Side B, "Kill City," follows an alternate history, featuring familiar characters in surprising roles, and burrows deeper into the methods and motivations of the murderers.

"Surges with new-century anxiety and paranoia . . . A clear-eyed, stone-cold vision of what's to come." ―Ben Marcus

"Jeff Jackson is one of contemporary American fiction's most sterling and gifted new masters. Destroy All Monsters . . . is a wonder to behold." ―Dennis Cooper