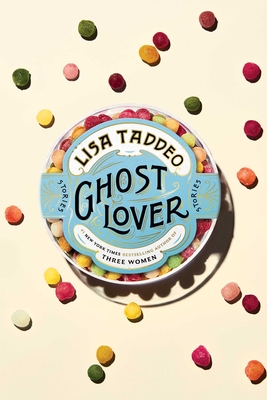 From Lisa Taddeo, #1 New York Times bestselling and award-winning author of Three Women and “our most eloquent and faithful chronicler of human desire” (Esquire), Ghost Lover is an electrifying collection of fearless and ferocious short stories.

Behind anonymous screens, an army of cool and beautiful girls manage the dating service Ghost Lover, a forwarding system for text messages that promises to spare you the anguish of trying to stay composed while communicating with your crush. At a star-studded political fundraiser in a Los Angeles mansion, a trio of women compete to win the heart of the slick guest of honor. In a tense hospital waiting room, an inseparable pair of hard-partying friends crash into life’s responsibilities, but the magic of their glory days comes alive again at the moment they least expect it.

In these nine riveting stories—which include two Pushcart Prize winners and a finalist for the National Magazine Award—Lisa Taddeo brings to life the fever of obsession, the blindness of love, and the mania of grief. Featuring Taddeo’s arresting prose that continues to thrill her legions of fans, Ghost Lover dares you to look away.

Lisa Taddeo is the author of the #1 New York Times bestseller Three Women, which she is adapting as a dramatic series at Showtime, and the novel Animal. She has contributed to The New York Times, New York, Esquire, Elle, Glamour, and many other publications. Her nonfiction has been included in the Best American Sports Writing and Best American Political Writing anthologies, and her short stories have won two Pushcart Prizes. She lives with her husband and daughter in New England.

PRAISE FOR LISA TADDEO AND ANIMAL:

“A provocative exploration of what happens when women are pushed beyond the brink, and what comes after the reckoning.”
—Adrienne Westenfeld, Esquire

“Animal will confirm Taddeo’s status as a pre-eminent channeller of women’s interior lives. . . . This book is a raging, funny and fierce thriller with a protagonist whose life force, against extraordinary odds—always in the gaze and sometimes the grasp of predatory, abusive men—is a thing of wonder.”
—Isabel Berwick, Financial Times

“With skill and insight, Taddeo examines how the savagery of men fuels female rage. The result is as intimate as it is explosive.”
—People (Book of the Week)

“[A] propulsive, fiercely confident debut novel . . . Joan’s voice is so sharp and magnetic that the reader will follow her anywhere. . . . Taddeo’s prose glitters. She has a gift for aphorism, the observation that astonishes.”
—Jennifer Haigh, The New York Times Book Review

“Animal is a viscerally satisfying depiction of female rage and a gripping exploration of what it’s like to endure male violence that is both mundane and life-altering.”
—New York magazine

“A breathtaking and important book . . . What a fine thing it is to be enthralled by another writer’s sentences. To be stunned by her intellect and heart.”
—Cheryl Strayed

“I can’t remember the last time a book affected me as profoundly as Three Women. Lisa Taddeo is a tireless reporter, a brilliant writer, and a storyteller possessed of almost supernatural humanity. As far as I’m concerned, this is a nonfiction literary masterpiece at the same level as In Cold Blood—and just as suspenseful, bone-chilling, and harrowing, in its own way. I know already that I will never stop thinking about the women profiled in this story—about their sexual desire, their emotional pain, their strength, their losses. I saw myself in all of them. Truly, Three Women is an extraordinary offering.”
—Elizabeth Gilbert

“An astonishing work of literary reportage . . . As Lisa Taddeo writes about her subjects, the women she uses to map out an anthropological, humane, passionate study of female desire, she seems almost to inhabit them. . . . A fascinating appraisal of a subject few writers have approached so intently.”
—Sophie Gilbert, The Atlantic

“The hottest book of the summer . . . Taddeo spent eight years reporting this groundbreaking book, moving across the country and back again in her staggeringly intimate foray into the sexual lives and desires of three ‘ordinary’ women. Tragedy and despair lurk in each of their stories, but Taddeo’s dynamic writing brings them all to breathtaking life.”
—Entertainment Weekly

“A dazzling achievement . . . Three Women burns a flare-bright path through the dark woods of women’s sexuality. In sentences that are as sharp—and bludgeoning, at times—as an ax, she retains the accuracy and integrity of nonfiction but risks the lyrical depths of prose and poetry.”
—Margaret Wappler, Los Angeles Times

“If it is not the best book about women and desire that has ever been written, then it is certainly the best book about the subject that I have ever come across. When I picked it up, I felt I’d been waiting half my life to read it; when I put it down, it was as though I had been disemboweled. . . . There isn’t a woman alive who won’t recognize—her stomach lurching, her heart beating wildly—something of what Maggie, Lina, and Sloane go through.”
—Rachel Cooke, The Guardian

“A heartbreaking, gripping, astonishing masterpiece, Three Women is destined to join the canon both of journalistic excellence and feminist literature.”
—Esquire