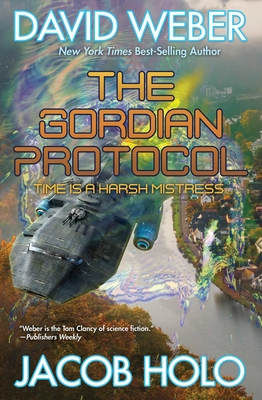 This is book number 1 in the Gordian Division series.

A MAN OF TWO WORLDS

History professor Benjamin Schröder lives a happy life. He has a job he loves in a profession he adores. Then everything changes. A student’s dissertation on Operation Yellow Brick, the Pacific Allies' invasion of Vladivostok, staged through occupied Japan to meet their Imperial German allies sets off a psychotic episode in Schröder. It has to be psychotic, right?

Schröder is flooded with memories of a different, ghastly world in which Operation Yellow Brick never happened. Memories of helpless civilians slaughtered in extermination camps. A world where the Chinese Communists succeeded. Where the Middle East became a festering sore of bloodshed and fanaticism. Worst of all—a world filled with thousands of nuclear warheads waiting to launch!

Then a lunatic knocks on Schröder’s door. He’s a man with an impossible story about alternate realities, time travel, temporal knots, and a dozen doomed universes which must inevitably die. It’s all beginning to sound . . . true. And if it is, then Benjamin Schröder could be the one man who will decide which universe lives and which dies. Including the universe that contains the woman he loves more than life itself.

THE TIME HAS COME TO CHOOSE.

About The Gordian Protocol:

“[A] fun and thrilling standalone from Weber and Holo. . . . Time travel enthusiasts will enjoy the moral dilemmas, nonstop action, and crisp writing.”—Publishers Weekly

About David Weber:
“[A] balanced mix of interstellar intrigue, counterespionage, and epic fleet action . . . with all the hard- and software details and tactical proficiency that Weber delivers like no one else; along with a large cast of well-developed, believable characters, giving each clash of fleets emotional weight.”—Booklist

“[M]oves . . . as inexorably as the Star Kingdom’s Grand Fleet, commanded by series protagonist Honor Harrington. . . . Weber is the Tom Clancy of science fiction. . . . His fans will relish this latest installment. . . .”—Publishers Weekly

“This entry is just as exciting as Weber’s initial offering. . . . The result is a fast-paced and action-packed story that follows [our characters] as they move from reaction to command of the situation. Weber builds Shadow of Freedom to an exciting and unexpected climax.”—The Galveston County Daily News

“Weber combines realistic, engaging characters with intelligent technological projection and a deep understanding of military bureaucracy in this long-awaited Honor Harrington novel . . . . Fans of this venerable space opera will rejoice to see Honor back in action.”—Publishers Weekly

“This latest Honor Harrington novel brings the saga to another crucial turning point . . . . Readers may feel confident that they will be Honored many more times and enjoy it every time.”—Booklist

"An entertaining sci-fi action novel with light overtones of dystopian and political thrillers."—Kirkus on The Dragons of Jupiter

Jacob Holo is a former-Ohioan, former-Michigander living in sunny South Carolina. He describes himself as a writer, gamer, hobbyist, and engineer who started writing after his parents bought him an IBM 286 desktop back in the ’80s. He’s been writing ever since.