The Gotti Wars: Taking Down America's Most Notorious Mobster (Hardcover) 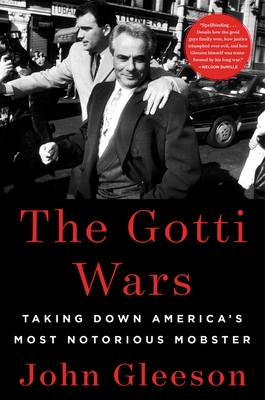 “Riveting…an electrifying true crime story of the Mafia-smitten eighties and nineties. Suspenseful and multifaceted, The Gotti Wars can’t be missed.” —Esquire, The Best Nonfiction Books of the Year

A “meticulous chronicle of good triumphing over evil” (The Washington Post) from the determined young prosecutor who, in two of America’s most celebrated trials, managed to convict famed mob boss John Gotti—and ultimately took down the Mafia altogether.

John Gotti was without a doubt the flashiest and most feared Mafioso in American history. He became the boss of the Gambino Crime Family in spectacular fashion—with the brazen and very public murder of Paul Castellano in front of Sparks Steakhouse in midtown Manhattan in 1985. Not one to stay below law enforcement’s radar, Gotti instead became the first celebrity crime boss. His penchant for eye-catching apparel earned him the nickname “The Dapper Don;” his ability to beat criminal charges led to another: “The Teflon Don.”

This is the captivating story of Gotti’s meteoric rise to power and his equally dramatic downfall. Every step of the way, Gotti’s legal adversary—John Gleeson, an Assistant US Attorney in Brooklyn—was watching. When Gotti finally faced two federal racketeering prosecutions, Gleeson prosecuted both. As the junior lawyer in the first case—a bitter seven-month battle that ended in Gotti’s acquittal—Gleeson found himself in Gotti’s crosshairs, falsely accused of serious crimes by a defense witness Gotti intimidated into committing perjury.

Five years later, Gleeson was in charge of the second racketeering investigation and trial. Armed with the FBI’s secret recordings of Gotti’s conversations with his underboss and consigliere in the apartment above Gotti’s Little Italy hangout, Gleeson indicted all three. He “flipped” underboss Sammy the Bull Gravano, killer of nineteen men, who became history’s highest-ranking mob turncoat—resulting in Gotti’s murder conviction. Gleeson ended not just Gotti’s reign, but eventually that of the entire mob.

A spellbinding, page-turning courtroom drama, The Gotti Wars “tells us in electrifying detail how the good guys finally won, how justice triumphed over evil, and how Gleeson himself was transformed by his long war” (Nelson DeMille).

John Gleeson, currently a partner at Debevoise & Plimpton, has had distinguished careers as a federal prosecutor, federal judge, and practicing defense attorney. He was lead counsel in the successful racketeering-murder trials of John Gotti and Vic Orena, respectively the bosses of the Gambino and Colombo crime families, for which he received the Attorney General’s Distinguished Service Award. As a United States District Judge in Brooklyn, he presided over more than 200 civil and criminal jury trials. Gleeson currently teaches at New York University School of Law, Harvard Law School, and Yale Law School. He lives in New York City with his family.

“A meticulous chronicle of good triumphing over evil…Gleeson manages to make the oft-told tale of Gotti’s downfall fresh with new perspective, insight, wisdom, and humor…. The book convincingly argues that, along with ensuring Gotti’s conviction, other information [mob turncoat] Gravano provided and the precedent he set caused other high-ranking mobsters to flip, dealing a virtual death blow to the American Mafia.”
—Washington Post

“A useful reminder, especially for Mafia romanticizers, that we’re dealing with sociopathic knuckle scrapers who settle scores with casual brutality…Gleeson, a lawyer in private practice these days, is an able storyteller [and his book displays] keen insights and neat turns of phrase.”
—New York Times

“The Gotti Wars is the riveting story of Gleeson’s fight to bring Gotti to justice, which spanned years, brought him into the crosshairs of organized crime, and ultimately took down five major mob families. It’s an electrifying true crime story of the Mafia-smitten 80s and 90s, to be certain, but also a vivid memoir of Gleeson’s development as a lawyer, and an excavation of the celebrity culture that turned a murderer into a superstar. Suspenseful and multifaceted, The Gotti Wars can’t be missed.”
—Esquire, "The Best Nonfiction Books of 2022 (So Far)"

“Compelling…Gleeson has crafted this retelling as carefully as he prepped the two cases [against the mobster]. His description of the politics behind the scenes and his interactions with the likes of U.S. Attorney Rudy Giuliani and Attorney General Bill Barr are icing on the cake….Do we need yet another book on Gotti? Gleeson answers the question with a resounding yes.”
—Library Journal (starred review)

"A memoir from the federal prosecutor who took down the “Teflon Don” 30 years ago…Gleeson is a thorough writer…[The Gotti Wars] offers a realistic portrait of how big cases are pieced together."
—Kirkus Reviews

“Spellbinding...tells us in electrifying detail how the good guys finally won, how justice triumphed over evil, and how Gleeson himself was transformed by his long war.”
—Nelson DeMille, New York Times bestselling author of The Gold Coast and Wild Fire

“Vivid, evocative, and genuinely suspenseful…An impressively detailed account of what it was like in the late 80’s and early 90’s to be chasing a flashy, dangerous mobster who had morphed into a pop culture icon…. John Gleeson is one of the most gifted prosecutors ever to match up against the Mafia.  As I should have guessed, he is also an immensely gifted storyteller.”
—Mary Jo White, former Chair of the SEC, former US Attorney for the Southern District of New York, and former Acting US Attorney for the Eastern District of New York

“Unflinchingly honest…contains moments that are both frightening and funny. I covered the rise and fall of John Gotti for seven years—through three trials and a dozen murders. I thought I knew this story inside and out, but this book shows I was mistaken. As John Gleeson tells the full story of how he built his ironclad case, you’ll feel like you’re sitting in the room where it happened—with the same nerve-jangling anticipation of how it will all turn out.”
—John Miller, former co-anchor of 20/20 and, currently, Deputy Commissioner of Intelligence and Counterterrorism for the NYPD

“A unique unveiling of the prosecutorial strategy that vanquished the American Mafia's most exalted late 20th century gangster. As a bonus, Gleeson offers candid views of the skills and shortcomings of his main opponents: the Teflon Don's battery of mob lawyers. Perhaps from his former perch on the bench his next book should pinpoint the frailties of our creaky criminal-justice system.”
—Selwyn Raab, New York Times bestselling author of The Five Families