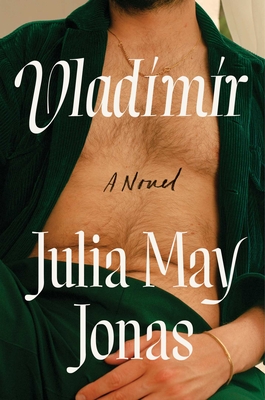 “Vladimir is an audacious story about gender, power, and shame told through the charged voice of an English professor at a small liberal arts college. The personal and political come to an explosive conclusion in this clever debut.”
— Linda Kass, Gramercy Books, Bexley, OH

A provocative, razor-sharp, and timely debut novel about a beloved English professor facing a slew of accusations against her professor husband by former students—a situation that becomes more complicated when she herself develops an obsession of her own...

“When I was a child, I loved old men, and I could tell that they also loved me.”

And so we are introduced to our deliciously incisive narrator: a popular English professor whose charismatic husband at the same small liberal arts college is under investigation for his inappropriate relationships with his former students. The couple have long had a mutual understanding when it comes to their extra-marital pursuits, but with these new allegations, life has become far less comfortable for them both. And when our narrator becomes increasingly infatuated with Vladimir, a celebrated, married young novelist who’s just arrived on campus, their tinder box world comes dangerously close to exploding.

With this bold, edgy, and uncommonly assured debut, author Julia May Jonas takes us into charged territory, where the boundaries of morality bump up against the impulses of the human heart. Propulsive, darkly funny, and wildly entertaining, Vladimir perfectly captures the personal and political minefield of our current moment, exposing the nuances and the grey area between power and desire.

Julia May Jonas is a writer and theater director. She has taught theater at Skidmore College and New York University, and lives in Brooklyn with her family. Vladimir is her debut novel.

“Delightful…a witty dance with the ghost of Nabokov and a razor-edged commentary on academia at our current fraught moment...by turns, cathartic, devious and terrifically entertaining.” —Jean Hanff Korelitz, The New York Times

"A virtuoso debut...our unnamed narrator [is] so witty, sharp and seductive that, as a reader, I was pretty much putty in her hands." —Maureen Corrigan, Fresh Air

“Vladimir goes into such outrageous territory that my jaw literally dropped at moments while I was reading it. There’s a rare blend here of depth of character, mesmerizing prose, and fast-paced action.” —Kate Tuttle, The Boston Globe

“Jonas, with a potent, pumping voice, has drawn a character so powerfully candid that when she does things that are malicious, dangerous and, yes, predatory, we only want her to do them again.” —Jessica Ferri, Los Angeles Times

"A deliciously dark fable of sex and power... Earmark an entire afternoon to devour this propulsive story of obsession, scandal, and transgressive desire." —Esquire

If Netflix’s The Chair, Lisa Taddeo’s best-seller Three Women, and the most compelling passages of Ottessa Moshfegh’s Death in Her Hands had a love child (just go with me here), it would be this fiction debut. With a title character who’s a sought-after young novelist new to a college faculty, Vladimir leaves the reader with more questions than answers—about sex, and sexual politics—in the most delicious way. —Entertainment Weekly

"Jonas’s narrator is a work of art in herself." —The Washington Post

“Timely, whip-smart, and darkly funny.” —People (Book of the Week)

"Funny, wise and instantly engaging, Vladimir is how I like my thrill rides: brainy and sexy." —Maria Semple, author of Where'd You Go Bernadette

“Vladimir is a thrilling debut—smart, sharp, and über provocative. I devoured it with fascination and awe.” —Lily King, author of Writers and Lovers

"Wickedly smart and subversive, a sort of Lolita sent through the looking glass or a Rebecca in reverse… [Vladimir] has some of the best food writing I’ve come across this year.” —Vox

“A subversive and modern take on Vladimir Nabokov's Lolita… Riveting and artfully rendered, Jonas' debut novel is a timely look at academic culture and shifting power dynamics that will leave you both laughing and gasping.” —Newsweek

"Romance readers, satire lovers, and critics of academia will be swept into the burning flames of passion by this account of a seasoned English professor and her growing obsession with Vladimir, the new young professor on campus.” —New York Public Library

"Fascinating... Jonas is not content with asking what do you want? or even why do you want it?... the novel begins to ask a harder question: What happens if you get what you want? What if you get the person you want, by any means necessary? What will you find? And what are the consequences? By asking and then putting forth answers to those tougher questions, Vladimir is able to descend into its own extremity." —Los Angeles Review of Books

"Like the man she shackles to a chair in the prologue, once this narrator has you, she won't let go. A remarkable debut.” —*starred* Kirkus Reviews

"Dark, funny, and perfectly timed for our contemporary moment, the novel explores ideas of desire and duty in a world where blurred lines can be catastrophic." —Town and Country

"Droll, dry, and pacy, Vladimir is deliciously unsparing and enormous fun." —Lionel Shriver, author of We Need to Talk About Kevin

"Deeply engrossing... Jonas’ novel is an enthralling, self-aware, and, at times, hilarious critique of academic privilege, while the narrator’s journey is a thoughtful allegory for how the old guard is responding to a new world." —Booklist

"Vladimir is among the best novels of the past two decades. Astonishing, magnificent, dazzling, deeply moving—and also deeply funny—it reminded me of some of my favorite works of fiction, from The Age of Innocence to Revolutionary Road to Le Divorce. It is the rare novel that I hoped would never, ever end." —Joanna Rakoff, author of My Salinger Year

"A reminder that the best art involves a search for truth. Vladimir is funny, clear, awake, vivid." —Amitava Kumar, author of Immigrant, Montana