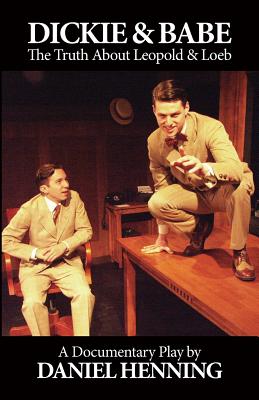 CHICAGO. 1924. Hyper-intelligent rich teens Richard "Dickie" Loeb & Nathan "Babe" Leopold are the epitome of the 1920's "Flaming Youth" until they commit one of the most shocking crimes in U.S. history: the kidnap and killing of 14-year-old Bobby Franks - in the quest of proving they are Nietzschean Supermen and committing the "perfect crime". The crime led to world-wide publicity and the infamous Trial of the Century with legal super star Clarence Darrow giving his most impassioned plea for mercy as their defense attorney. Over the years the boys' tale has been sensationalized - but the dark truths behind the crime have never really been told...until now. Playwright Daniel Henning researched two years all across the country before writing this documentary play; exploring the hidden details of Leopold & Loeb's twisted relationship and the reasons behind their bizarre crime."What's most distinctive about Henning's treatment is the way he enters the mind-set of these killers, linking the peculiar intimacy they shared with their pathological megalomania... The manipulative gamesmanship is frighteningly convincing... There's something hypnotic about the experience. The production... unfolds as a series of miniature tableaux, with short, sharply delineated scenes shifting between a sepia-tinged newsreel style and a more theatrically surreal approach."- Charles McNulty, LOS ANGELES TIMES"A brilliant tour de force combining 'Ferris Bueller's Day Off' with 'A Rake's Progress'...provides a lot of entertainment value for the buck... Henning's language, whether invented or taken from the court transcripts, has a vitality and glee about it that matches the unreflective nature of the killers and the high, optimistic spirits of the times, but it is Henning's superb structuring of events that makes each new development more gripping than the last. Even at the end, the audience would have been willing to go on."- Laurence Vittes, HOLLYWOOD REPORTER"Four Stars Everything about this edge-of-your-seat production is virtually flawless. Scandalous and mesmerizing, this depiction of the two-headed monster known as Leopold and Loeb makes for an evening of unforgettable theatre."- Todd David Schwartz, CBS RADIO"Both fascinating and enlightening...absorbing and well-written."- Terri Roberts, THEATERMANIA "A wonderful new play, one deserving a definite future ."- Travis Michael Holder, ENTERTAINMENT TODAY.

DANIEL HENNING is the Founding Artistic Director of The Blank Theatre Company. His productions have won over 60 awards including "Best Production" from LA Drama Critics Circle, LA Weekly, Ovation Awards, NAACP Theatre Awards, BackStage Garlands etc. Henning won a 2017 Telly Award for "Best Writer" for the film version of his play The Tragedy of JFK (as told by Wm. Shakespeare). As director and writer, his TV and film work includes MTV's Rob Dyrdek's Fantasy Factory and Critic's Choice. He won the NAACP Theatre Award for "Best Director of a Musical" for The Wild Party. He directed the first play by Tony Award winner Stephen Karam, when Karam was 17 and a winner in The Blank's Young Playwrights Festival. Henning is a graduate of NYU's Tisch School of the Arts, Circle in the Square Theatre School, and American Conservatory Theatre. www.DanielHenning.net