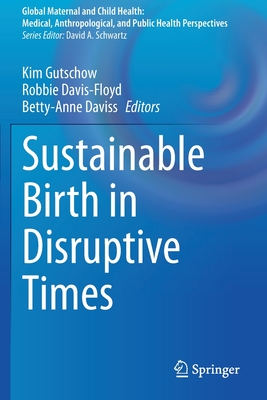 This contributed volume explores flexible, adaptable, and sustainable solutions to the shockingly high costs of birth across the globe. It presents innovative and collaborative maternity care practices and policies that are intersectional, human rights-based, transdisciplinary, science-driven, and community-based. Each chapter describes participatory and midwifery-oriented care that helps improve maternal and newborn outcomes within minoritized populations. The featured case studies respond to resource constraints and inequities of access by transforming relations between providers and families or by creating more egalitarian relations among diverse providers such as midwives, obstetricians, and nurses that minimize inefficient hierarchies within maternity care. The authors build on a growing awareness that quality and respectful midwifery care has lower costs and improved outcomes for child bearers, newborns, and providers. Topics include:

Kim Gutschow, is a Lecturer in Anthropology and Religion, and affiliated with Public Health, Asian Studies, and Women's, Gender, & Sexuality Studies, at Williams College in Williamstown, Massachusetts, where she has taught since 2003. She has published over 35 articles on maternity care, maternal death reviews, and counting maternal mortality in India and the United States; as well as on the gender dynamics and discourses of Buddhist monasticism, Tibetan medicine, community-based irrigation, and land use practices in the Indian Himalayas. She is the author of Being a Buddhist Nun: The Struggle for Enlightenment in the Indian Himalaya (Harvard 2004), which won the Sharon Stephens Prize for best ethnography (2005). Her collaborative research projects with Ladakhi teams have received several awards including a Humboldt Fellowship for Experienced Researchers (2009) for Birth: From Home to Hospital and Back Home Again; a National Geographic Explorer Award (2019) for Climate Change Adaptation: By the People, For the People, as well as funding from the Harvard Society of Fellows (1997-2000) and the German Research Council (Deutsche Forschungsgemeinschaft). She raised $100,000 to fund appropriate technology, passive solar design, and other projects with and for Zangskari women via the Gaden Relief Zanskar Project between 1991-2015.Robbie Davis-Floyd, PhD, is Senior Research Fellow in the Department of Anthropology, University of Texas at Austin, and Fellow of the Society for Applied Anthropology. She is a well-known medical anthropologist, midwifery and doula advocate, and international speaker and researcher in transformational models in maternity care. Robbie is author of over 80 journal articles and 24 encyclopedia entries, and of Birth as an American Rite of Passage (1992, 2003) and Ways of Knowing about Birth: Mothers, Midwives, Medicine, and Birth Activism (2018); coauthor of The Power of Ritual (2016); and lead editor of 13 collections, including the award-winning volumes Childbirth and Authoritative Knowledge (1997) and Cyborg Babies (1998); and the "seminal" Birth Models That Work (2009). Her most recent collection, co-edited with Melissa Cheyney, is Birth in Eight Cultures (2019). Birthing Models on the Human Rights Frontier: Speaking Truth to Power, co-edited with Betty-Anne Daviss, is in press. As a Board Member of the International MotherBaby Childbirth Organization, Robbie served as Lead Editor for the International Childbirth Initiative (ICI): 12 Steps to Safe and Respectful MotherBaby-Family Maternity Care (a joint IMBCO/FIGO global initiative). She presently serves as Lead Editor for a Routledge series called "Social Science Perspectives on Childbirth and Reproduction," and as Senior Advisor to the Council on Anthropology and Reproduction.Betty-Anne Daviss, MA, BMJ, RM (Registered Midwife), has served as a midwife for 45 years practicing in various countries on six continents, and as a researcher in the social sciences and clinical epidemiology for over 25 years. She is an Adjunct Professor in Gender and Women's Studies at Carleton University, Ottawa, in Ontario, Canada, and has taught since the 1980s on reproductive issues and the politics of gender and health, while working towards midwifery legislation in North America and abroad. She co-authored the large prospective home birth study of Certified Professional Midwives in North America published in the BMJ (2005) that continues to be accessed 500-800 times a month; the World Report on Postpartum Hemorrhage, when she worked for the International Federation of Gynecology and Obstetrics (FIGO) (Lalonde et al 2006), which continues to be used with updates; and was the co-principal investigator and principal writer for the Frankfurt study comparing vaginal breeches born with the mothers on their backs vs. in upright positions (Louwen et al. 2017). The only midwife in Canada in the last two decades to have achieved official hospital privileges to attend breech births without a transfer to obstetrics, Betty-Anne has been involved with over 170 planned vaginal breech births, and provided workshops, rounds, and/or plenaries on vaginal breech in Europe, Africa, North and South America, China, India, Australia, and Turkey. She has testified for 10 midwifery hearings/court cases and 11 state and 3 provincial legislative processes.