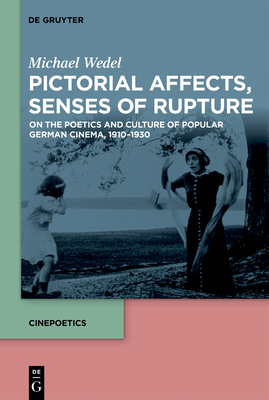 By Michael Wedel
$97.99
Possibly out of print. Email or call to check availability and price.

German film in the Wilhelmine and Weimar periods is regarded as marked by a strong sense of cultural conservatism and the aspiration to be recognized as an art form. This book takes an alternative approach to the history of German cinema from the emergence of the early feature film to the transition to sound by focusing on the poetics of popular genres such as the disaster film, melodrama, the musical and the war film, exploring their cultural reverberations and modes of audience address.

Based on the assumption that popular cinema contributed immensely to the breakthrough of a modern audiovisual culture of the senses in Germany between 1910 and 1930, Pictorial Affects, Senses of Rupture offers close readings of a number of rarely analyzed films, including one of the first cinematic adaptations of the Titanic disaster from 1912 and the German version of All Quiet on the Western Front from 1930. Restoring the films' horizons of historicity by locating them at crucial points of intersection between social, cultural, technological and aesthetic discourses, this book argues for the prominent role popular German cinema's own forms of discursivity have played within the historical formation of modernity.