Group Theory: Application to the Physics of Condensed Matter (Hardcover) 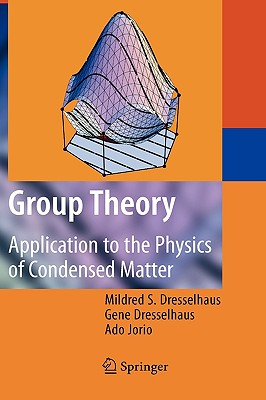 Here is a unique pedagogical textbook by the gifted Professor Mildred Dresselhaus. It first provides a quick introduction to the theoretical background, the first four chapters which can be covered in six to eight classroom hours. From there, each chapter develops new theory while introducing applications so that students can best retain new concepts, build on concepts learned the previous week, and see interrelations between topics as presented. Essential problem sets between the chapters also aid the retention of the new material and for the consolidation of material learned in previous chapters. The text and problem sets provide a useful springboard for the application of the basic material presented here to topics in semiconductor physics and the physics of carbon-based nanostructures.

M. S. Dresselhaus received her Ph.D. in Physics from the University of Chicago, in 1958. An Institute Professor at the Massachusetts Institute of Technology, she has been active in many aspects of materials research with particular emphasis on carbon science including nanostructures such as carbon nanotubes, but also including bismuth nanowires and other materials systems relevant to low dimensional thermoelectricity. She is the recipient of the National Medal of Science and 21 honorary degrees worldwide. She served as the Director of the Office of Science at the DOE in 2000--2001 and co-chaired a DOE report Basic Research Needs for the Hydrogen Economy (2003). G. Dresselhaus received his Ph.D. in Physics from the University of California, Berkeley, CA in 1955. He was a faculty member at the University of Chicago, and assistant professor at Cornell before joining MIT Lincoln Laboratory in 1960 as a staff member. In 1976 he assumed his current senior staff position at the MIT Francis Bitter Magnet Laboratory. His area of interest is the electronic structure of nanomaterials and he has co-authored with M.S. Dresselhaus several books on fullerenes, nanowires, and nanotubes.A. Jorio received his Ph.D in Physics from the Universidade Federal de Minas Gerais (UFMG), Belo Horizonte, Brazil, in 1999. He worked with Phase Transitions on Incommensurate Crystals, and he spent one year at the Institute Laue-Langevin (ILL), Grenoble, France. He also spent two years (2000 and 2001) as a post-doc at the Massachusetts Institute of Technology (MIT), Cambridge, USA, working with Raman Spectroscopy of Carbon Nanotubes. In 2001 he received the PROFIX Fellowship from the Brazilian Science Foundation CNPq, and returned to Brazil. He is a Professor of Physics at UFMG since 2002. Jorio's research interests focus on resonance Raman spectroscopy techniques and the photophysics of nanostructures.