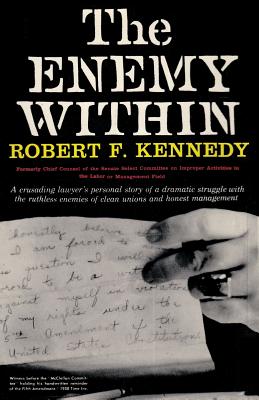 By Robert F. Kennedy, Arthur Krock (Foreword by), Sam Sloan (Introduction by)
$19.95
Possibly out of print. Email or call to check availability and price.

Written right on the firing line in one of the hottest sectors of the fight for law and order, this book is a no-holds-barred report on the work of the McClellan Committee. Covering also the methods evolved by Committee investigators to dig out the facts; the threats, dodges and pressures used to balk them; the strains within the Committee itself, and within the staff, and the significant factors of press and public opinion, it is illuminated by firsthand knowledge and charged with the force of absolute honesty and the fire of personal conviction. Every member of the McC1ellan Committee knew he might be digging his political grave, but they all went ahead and uncovered a shocking story of venality, greed, corruption and mania for power in the ranks of both labor and management. Over the course of three years, hearing fifteen hundred witnesses and taking fourteen million words of testimony, the Committee proved that in a frightening number of cases labor leaders. management, the underworld and public officials, sometimes in combination, sometimes separately, had worked to cheat the rank-and-flle union members. Focusing on some of the highlights of the investigation, Kennedy tells, for example: how an anonymous telephone call sparked a major investigation and led to the exposure of a huge swindle; how a tip from the "friend of a friend" led to the downfall of Dave Beck; why Roy Underwood shot himself; how "democracy" actually operates in Hoffa's captive unions and what happens to the men who dare to stand up to him; how a reluctant witness was persuaded to testify; how two earlier Congressional committees dropped their investigations of the Teamsters Union; how Hoffa was tried on charges of attempting to plant a spy in the McClellan Committee: why an investigator crawled under a bed and another wore a postman's uniform; how unions are bought and sold - and sometimes stolen; how underworld racketeers infiltrate a union; how, to take the Fifth Amendment by proxy; why honest union leader refused to testify; what mistake the author made with a witness once, but never again; what lay behind the "get Reuther" investigation - and why it fizzled. Kennedy discusses too, with illustrative and fascinating anecdotes, such basic matters as how an investigating committee goes about getting its facts: how a case is prepared for hearing; why it is difficult to assemble a good investigative staff on Capitol Hill; the procedures that in his opinion an investigating committee should follow and what happens when it doesn't; whether a witness should be permitted to hide behind the Fifth Amendment; and how far - and when it is permitted to dig into a man's private life. Writing crisply, with indignation but also with humor, Kennedy has told a crackling story of the committees work and of the revelations that not only toppled some important union leaders and resulted in a healthy number of convictions but also laid the basis for a sorely needed new labor law. It is a story that only Bob Kennedy could have written.