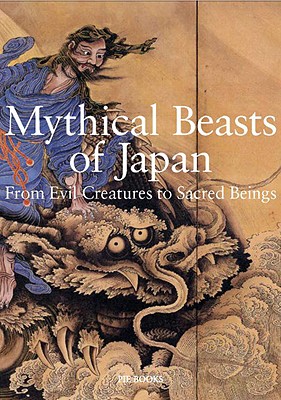 By Akiko Taki (Editor), Koichi Yumoto (Text by), Hiroyuki Kano (Text by)
$35.00
Possibly out of print. Email or call to check availability and price.

A collection of glorious imaginary beings from Japanese mythology. The newest volume in the Traditional Patterns series, this book is a visual introduction to a variety of Japanese mythical beasts. Japanese imaginary creatures, such as Byakko (White Tiger), Suzaku (Vermilion Bird), Genbu (Black Tortoise), and Ryu (Japanese Dragon), were handed down from ancient Chinese mythology. Prayers were often offered to these beings since they are believed to cause mischief among ordinary mortals. Most of the featured works, mainly from the 12th century to the 19th century, feature motifs of sacred animals painted by artists such as Kawanabe Kyosai, Ito Jakuchu, Utagawa Kuniyoshi ,and more. Moreover, all kinds of the evil creatures, such as devils and goblins, and the deities from Japanese folklore are depicted in all their splendid glory in paintings, carved wood, decorative art pieces such as mirrors, incense burners, and much more.

Koichi Yumoto is a specialist in Japanese mythical beasts and heads the curatorial board at Kawasaki City Museum in Japan. He edits and writes several publications relating to Japanese specters. Hiroyuki Kano worked as the head of Department of Fine Arts at Kyoto National Museum in Japan. He is currently a professor of Culture and Information Science at Doshisha University in Japan, specializing in the paintings of the Momoyama period and the Edo period (16th 19th century), including Ukiyo-e study."