Being and Becoming African as a Permanent Work in Progress: Inspiration from Chinua Achebe's Proverbs (Paperback) 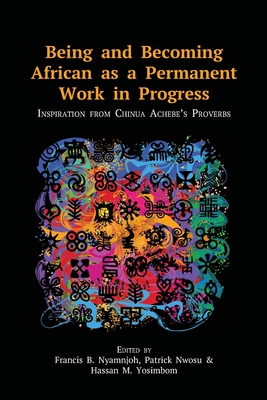 This book is a timely addition to debates and explorations on the epistemological relevance of African proverbs, especially with growing calls for the decolonisation of African curricula. The editors and contributors have chosen to reflect on the diverse ways of being and becoming African as a permanent work in progress by drawing inspiration from Chinua Achebe's harnessing of the effectualness of oratory, especially his use of proverbs in his works. The book recognises and celebrates the fact that Achebe's proverbial Igbo imaginations of being and becoming African are compelling because they are instructive about the lives, stories, struggles and aspirations of the rainbow of people that make up Africa as a veritable global arena of productive circulations, entanglements and compositeness of being. The contributions foray into how claims to and practices of being and becoming African are steeped in histories of mobilities and a myriad of encounters shaped by and inspiring of the competing and complementary logics of personhood and power that Africans have sought and seek to capture in their repertoires of proverbs. The task of documenting African proverbs and rendering them accessible in the form of a common hard currency with fascinating epistemological possibilities remains a challenge yearning for financial, scholarly, social and political attention. The book is an important contribution to John Mbiti's clarion call for an active and sustained interest in African proverbs.