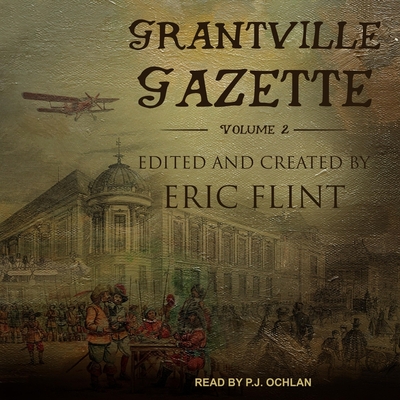 By Eric Flint, Eric Flint (Contribution by), P. J. Ochlan (Read by)
$24.99
Possibly out of print. Email or call to check availability and price.

The new United States in central Germany launches a one-plane Doolittle Raid on Paris, France. The target: their arch-enemy, Cardinal Richelieu. Meanwhile, an ambassador from the Mughal Empire of northern India is being held captive in Austria by the Habsburg dynasty. Mike Stearns decides to send a mercenary company to rescue him, led by two seventeenth-century mercenary officers: an Englishman and a Irishman, who seem to spend as much time fighting each other as they do the enemy. Mike Spehar's Collateral Damage and Chris Weber's The Company Men are just two of the stories contained in this second volume of the Grantville Gazette. In other stories: ● A prominent Italian musician decides to travel to Grantville to investigate the music of the future. ● An American archer and a Finnish cavalryman become friends in the middle of a battlefield. ● A Lutheran pastor begins a theological challenge to the establishment based on his interpretation of the Ring of Fire. ● American and German detectives become partners to investigate a murder. Contains mature themes.