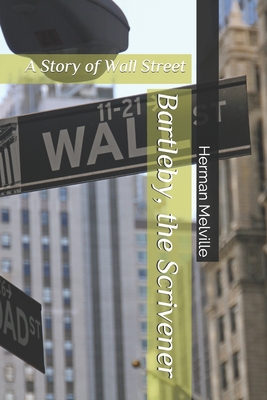 "Bartleby, the Scrivener: A Story of Wall Street" is a short story by the American writer Herman Melville, first serialized anonymously in two parts in the November and December 1853 issues of Putnam's Magazine, and reprinted with minor textual alterations in his The Piazza Tales in 1856. In the story, a Wall Street lawyer hires a new clerk who, after an initial bout of hard work, refuses to make copies or do any other task required of him, with the words "I would prefer not to."Numerous critical essays have been published about the story, which scholar Robert Milder describes as "unquestionably the masterpiece of the short fiction" in the Melville canon.The narrator is an elderly, unnamed Manhattan lawyer with a comfortable business in legal documents. He already employs two scriveners, Nippers and Turkey, to copy legal documents by hand, but an increase in business leads him to advertise for a third. He hires the forlorn-looking Bartleby in the hope that his calmness will soothe the irascible temperaments of the other two. An office boy nicknamed Ginger Nut completes the staff.At first, Bartleby produces a large volume of high-quality work, but one day, when asked to help proofread a document, Bartleby answers with what soon becomes his perpetual response to every request: "I would prefer not to." To the dismay of the narrator and the irritation of the other employees, Bartleby performs fewer and fewer tasks and eventually none, instead spending long periods of time staring out one of the office's windows at a brick wall. The narrator makes several futile attempts to reason with Bartleby and to learn something about him; when the narrator stops by the office one Sunday morning, he discovers that Bartleby has started living there.Tension builds as business associates wonder why Bartleby is always there. Sensing the threat to his reputation but emotionally unable to evict Bartleby, the narrator moves his business out. Soon the new tenants come to ask for help in removing Bartleby, who now sits on the stairs all day and sleeps in the building's doorway at night. The narrator visits Bartleby and attempts to reason with him; to his own surprise, he invites Bartleby to live with him, but Bartleby declines the offer. Later the narrator returns to find that Bartleby has been forcibly removed and imprisoned in the Tombs. Finding Bartleby glummer than usual during a visit, the narrator bribes a turnkey to make sure he gets enough food. When the narrator returns a few days later to check on Bartleby, he discovers that he died of starvation, having preferred not to eat.Sometime afterwards, the narrator hears a rumor that Bartleby had worked in a dead-letter office and reflects that dead letters would have made anyone of Bartleby's temperament sink into an even darker gloom. The story closes with the narrator's resigned and pained sigh, "Ah Bartleby Ah humanity