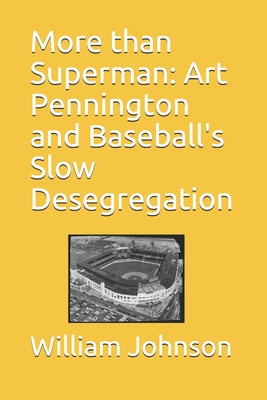 Art Pennington lived one of those lives that no longer seem possible. He was talented enough on the baseball diamond to play in two East-West All Star games, excel in the Mexican League in the late 1940s, and then return to the desegregated U.S. minor leagues in the 1950s. He was still talented enough to lead the 3-I League in batting in 1952. He was gifted, with a resume of excellence not often equaled in the larger gamut of the history of professional baseball. Perhaps his most important contributions to the nation and to his community, however, came well after he hung up his spikes in 1958. The tolerance of his skin color, at least in contrast to that which he'd endured for thirty years, following his arrival in Cedar Rapids, Iowa, ultimately led to his adoption of the Iowa city as his home. He repaid his adopted community by gently, but firmly, nudging its citizens forward in the larger, national struggle for racial equality. Without any formal education beyond his years at segregated Langston High School in Hot Springs, Arkansas, he channeled his formidable strength and determination into weakening some of the psychological barriers that existed between black and white in the 1960s. He became the first non-white to ever run for election as Linn County sheriff, Cedar Rapids' Safety Commissioner, and even Cedar Rapids' mayor. While the rest of America raged in the violent racial confrontations of the 1960s, Art Pennington showed his new home a gentler way, breeding understanding and mutual acceptance by putting the responsibility of citizenship above any individual's physical traits.