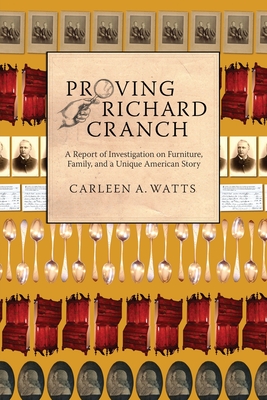 Public records show Richard Cranch-best friend of Founding Father John Adams and brother-in-law to Abigail Adams-once owned a desk and bookcase, known as a "secretary." Could this historic piece be the one sitting in Carleen's study?

At the end of his life, George Dawes, a family friend and Richard Cranch's great-great-grandson entrusted his family's heirlooms to the author's mother-most importantly an 18th-century mahogany secretary crafted in Boston. For 20 years-with the meticulous tenacity of a Federal Special Agent and Certified Fraud Examiner (now retired) tackling a case-author Carleen A. Watts researched its storied path through several generations of American history.

In Proving Richard Cranch, we follow her through mysterious twists and turns, cold leads, and dead ends as she searches for evidence to establish a chain of custody for George's secretary, some to be found among other Dawes Collection items, including a treasure trove of old letters written by young "Nanty" Dawes, who captures years of rarely seen everyday family scenes with her wonderfully detailed and humorous art.

Join Carleen for a glimpse of 19th-century life and historic events, from domestic vignettes in Massachusetts to the drama of the 1906 San Francisco earthquake, from the questions that rise irresistibly from examining this vivid past to the answers found hidden in the present day-all available to an intrepid investigator.