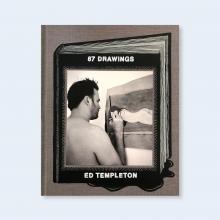 "While sometimes overlooked due to his acclaim in other areas of art, drawing still lies at the heart of Ed Templeton’s practice. These multi-layered pen and ink scribbles, created almost automatically, have always been the place where Ed has worked out his issues. Both as an artist and in his relationship to the world." —Aaron Rose

The images in Ed Templeton: 87 Drawings cover a span of over thirty years, from 1990 to 2021, and deliver a remarkable retrospective of the artist’s intimate drawing style. Templeton examines the studied ennui of adolescents and young adults, capturing his subjects’ specific personalities while documenting the visual identity born of the distinctive skating and surfing culture that originated in Southern California. He knows this culture well, growing up there before becoming a professional (and World Champion) skateboarder, contemporary artist, and photographer. His subjects are often drawn as portraits, their faces shown with a striking detail that contrasts with the simple lines of their bodies. Though they project a cool indifference, they are celebrated by the artist, whose fondness for them both recognizes and commends their subversive style. As Kim Hastreiter notes in the preface, his “secret ingredient is empathy.”

The collection also includes more personal drawings. There are eight of his wife and collaborator, Deanna; a self-portrait; and a drawing of them together. Fourteen of the drawings are on vintage hotel stationery, further anchoring the drawings in place, if not time. His grandfather collected much of the stationery; Templeton’s use of it adds a connective thread to both Southern California culture and his own life. Raised by his grandparents, Templeton credits his grandmother with exposing him to the art that would “enrich his life immensely,” and closes the book with a portrait of her at the end of her life.

87 Drawings is printed on natural textured art paper, and bound in cloth with a tipped-in reproduction and original silkscreen design by the artist. The first printing is limited to 2,000 copies.

Ed Templeton (b.1972) is an American painter and photographer whose work reflects human behavior with emphasis on youth subcultures, religious affectation, and suburban conventions using a cinéma vérité approach embracing chance encounters. Templeton is a respected cult figure in the subculture of skateboarding, a two-time world-champion, and Skateboarding Hall of Fame inductee. He is best known for his photographic books and multi-media exhibitions. His work has been exhibited in museums worldwide including, MOCA, Los Angeles, ICP, NYC, Palais de Tokyo, Paris, Kunsthalle, Vienna, Pier 24 Photography, San Francisco. His work is held in the collection of the Museum of Modern Art in New York, SMAK Museum Belgium, Orange County Museum of Art, Bonnefanten Museum, Maastricht.

Kim Hastreiter (b.1951) is an American journalist, editor, publisher, and curator who co-founded Paper magazine. She served as co-Editor- in-Chief from its inception until 2017, when she and partner David Hershkovits sold the company. In her column of 32 years, “Note From Kim,” Hastreiter observed and articulated cultural movements and trends that she saw forming, deciphering the transforming zeitgeist. She resides in New York City.

There’s something about the artist Ed Templeton that makes me feel like he can’t help himself. Through his art we merely step into his eyes and see the often random people and circumstances he encounters on a daily basis, how he sees them. What you hold in your hands is what Templeton tells me is around his 21st book. It’s called 87 Drawings and is his first book solely dedicated to his drawings.

The title-page which serves as an impromptu subtitle for this book says: IATROGENIC CALAMITY. He explained to me the word “iatrogenic” means literally “an illness caused by a medical examination or treatment.” Ed loves this word because it represents the idea that the very thing you’re trying to do to help yourself is what harms you. Aha. When I asked him if he is a catastrophist, he tells me he has deep cynicism about the human race and always has the feeling that when something good happens, something bad will surely follow, adding a caveat that he also thinks good stuff can come out of catastrophes too. This book of drawings, conceived during the pandemic, is one of them and has everything closest to his heart in it: teenage smokers, punks, disaffected youth, those walls that define Huntington Beach to him. . . . Mixed into these pages are also the people most important to Ed in life. The very first drawing in the book is a nude sketch of a reclining Deanna he made as an 18-year-old in 1990. Seven more drawings of Deanna done over the past 30 years are also scattered throughout the book. She is obviously his North Star.

(from the Introduction by Kim Hastreiter)