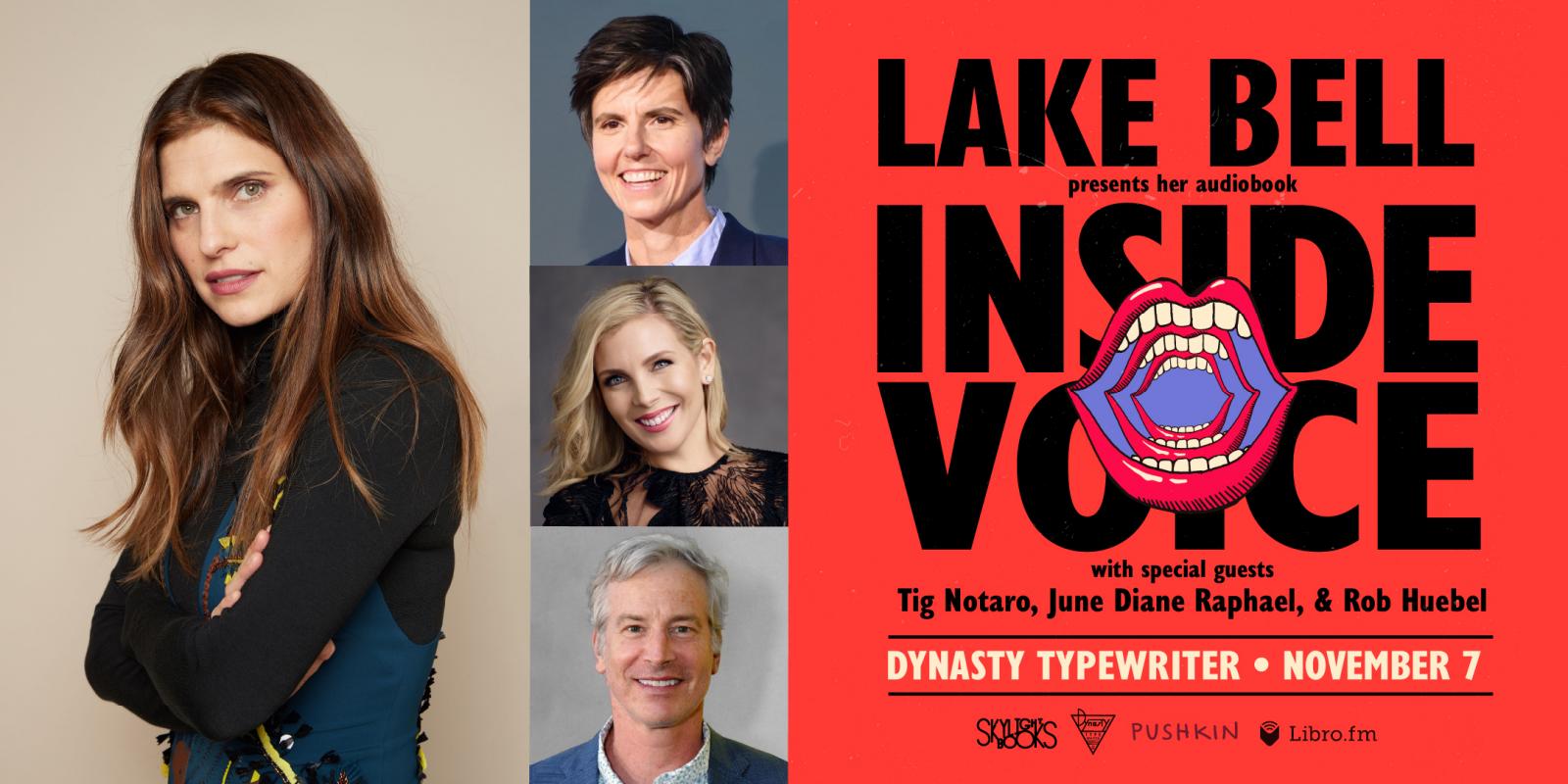 INSIDE VOICE: My Obsession with How We Sound by Lake Bell Audiobook Release Event! This event is co-presented by Pushkin.fm, Skylight Books, Libro.fm & Dynasty Typewriter!

PLEASE NOTE: PROOF OF FULL VACCINATION IS REQUIRED UPON ENTRY. NAME ON VACCINATION CARD MUST MATCH YOUR ID.

INSIDE VOICE is humorous, insightful, and personal deep dive into our most outward-facing, least-appreciated trait: our voice.

Raise your hand if you cringe at the sound of your own voice, worry that you actually do sound like your mother, or have spent a sleepless night wondering if your inner and outer voices are in sync.

Now, hands down, headphones on. Lake Bell is going to tell you why you’re not alone and why your voice matters in the most deeply personal ways.

Inside Voice unpacks the writer-director-producer-actor’s obsession with voice and all its permutations. It takes us on a journey to discover how this vital piece of our identity serves as an x-ray of our personal histories. Bell explored the power of voice in her critically-acclaimed and award-winning film, In a World, which she wrote, directed, and starred in. With this audiobook, she dives back into the rabbit hole to deliver a fun, whip-smart exploration of the psychology, social science, cultural constructs, and mechanics of our voices.

When you hear the iconic voices of Drew Barrymore, Susie Essman, Tracey Ullman, Jeff Goldblum, or Pam Grier (all contributors to the book), you know right away who they are. Interviews with these legends as well as poets, doctors, linguists, voice coaches and conversations with pedestrians on the street get to the heart of why the way we sound matters so much. Voice can be why you laugh at a certain joke or decide to trust someone or even fall in love.

Uniquely suited to audio, Inside Voice is symphonic; complete with interactive games and exercises, and an original score by Chris Bear (Grizzly Bear). You might want to buckle up. This listen is a ride.

Lake Bell is an American actress, screenwriter, producer and director whose acting credits include No Escape, Man Up, It’s Complicated, What Happens in Vegas, How to Make It in America, Children’s Hospital, and Bless This Mess, which she also co-created and produced. She has written and directed two feature films, In a World… and I Do… Until I Don’t and is currently developing her third original film, which she wrote, will direct and star in. Bell recently directed two episodes of the Hulu series Pam and Tommy, starring Lily James, Sebastian Stan and Seth Rogen. She currently stars as the lead voice in the animated, award-winning Sundance film Cryptozoo by Dash Shaw, as Poison Ivy in DC Universe’s Harley Quinn, and as Black Widow in Marvel’s What If series. Bell completed her four years of drama conservatory training at The Rose Bruford College of Speech and Drama in London and serves as an active board member of Women In Film, a non-profit advocating for the success of female peers in the entertainment industry. Bell was born in New York City and lives in Los Angeles with her two children.