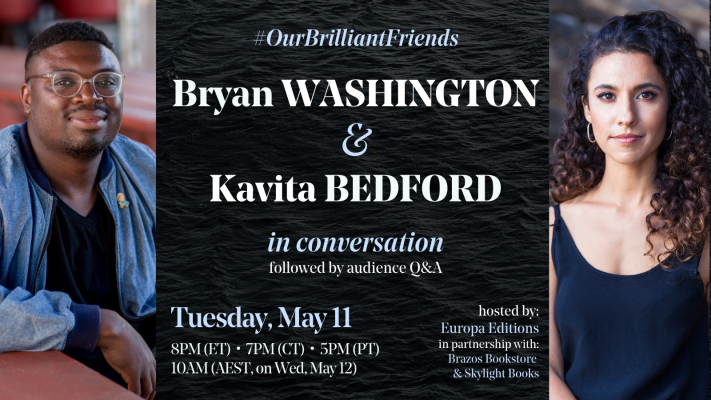 A conversation between the Australian-Indian author of Friends and Dark Shapes, Kavita Bedford, and best-selling author of Memorial and Lot, Bryan Washington, hosted by Europa Editions in partnership with Skylight Books and Brazos Bookstore.

#OurBrilliantFriends is back! This May 11, join us for an international literary evening spanning two continents (and many more time zones!).

Sydney-based author Kavita Bedford, whose newly-released debut novel Friends and Dark Shapes was hailed by The Guardian as “an intimate, epiphanic portrait of millennial city life” will be in converation with Bryan Washington, a National Book Award 5 Under 35 honoree, author of the award-winning story collection Lot, and the bestselling novel Memorial.

The conversation will be introduced by Michael Reynolds, editor-in-chief of Europa Editions, and will be followed by a live audience Q&A.

Wry, relatable, lyrical, and beautifully told, Friends and Dark Shapes tells the story of a group of housemates in Sydney’s inner city contending with gentrification, divisive politics, stalled careers, their own complicated privilege as second-generation Australians, and the evolving world of dating.

Praised by Jenny Offil as “astonishingly assured and full of razor sharp observations about what it means to live precariously in a changing city,” Friends and Dark Shapes introduces a bold new Australian voice to American readers.

Kavita Bedford is an Australian-Indian writer with a background in journalism, anthropology and literature. Her writing has appeared in Guernica, The Guardian and she was a recent Churchill Fellow exploring migrant narratives. She works and teaches in Sydney in media and global studies. Friends and Dark Shapes is her first novel.

Bryan Washington is a National Book Award 5 Under 35 honoree and winner of the Dylan Thomas Prize and the Ernest J. Gaines Award for Literary Excellence. He received the New York Public Library Young Lions Fiction Award for his first book, Lot. His second book, Memorial, was named a Notable Book of the Year by the New York Times. He lives in Houston.

Praise for Friends and Dark Shapes:

“Astonishingly assured and full of razor sharp observations about what it means to live precariously in a changing city. It’s hard to believe this is Bedford’s first novel.”—Jenny Offill, author of Dept. of Speculation and Weather

“An unflinching novel that captures the isolation and emotional overload of modern life.”—ForeWord Reviews

“An intricately observed mosaic that comes together to represent a multi-faceted story of a Sydney that is forever evolving, in ways both positive and destructive.”—In Daily

“Bedford beautifully portrays life of an Australian Indian writer struggling with grief a year after the death of her father [ . . . ] An insightful view of a city in flux.”—Publishers Weekly

“It was a genuine pleasure to read this book; I felt as though I were sitting with a close friend, whispering to each other, sharing close-kept secrets. It made me rethink how loneliness can manifest; how we sometimes hurt ourselves and each other. Friends and Dark Shapes is a real delight and Kavita Bedford is a true talent.”—Kristen Arnett, author of Mostly Dead Things