JUDITH TEITELMAN reads from her debut novel GUESTHOUSE FOR GANESHA 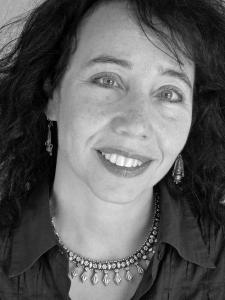 Guesthouse for Ganesha (She Writes Press)

In 1923, seventeen-year-old “Esther Grünspan arrives in Köln with a hardened heart as her sole luggage.” Thus, she begins a twenty-two-year journey, woven against the backdrops of the European Holocaust and the Hindu Kali Yuga (the “Age of Darkness” when human civilization degenerates spiritually), in search of a place of sanctuary. Throughout her travails, using cunning and shrewdness, Esther relies on her masterful tailoring skills to help mask her Jewish heritage, navigate war-torn Europe, and emigrate to India.

Esther’s traveling companion and the novel’s narrator is Ganesha, the elephant-headed Hindu God worshipped by millions for his abilities to destroy obstacles, bestow wishes, and avenge evils. Impressed by Esther’s fortitude and relentless determination, born of her deep―though unconscious―understanding of the meaning and purpose of love, Ganesha, with compassion, insight, and poetry, chooses to highlight her story because he recognizes it is all of our stories―for truth resides at the essence of its telling.

Weaving Eastern beliefs and perspectives with Western realities and pragmatism, Guesthouse for Ganesha is a tale of love, loss, and spirit reclaimed.

Praise for Guesthouse for Ganesha

“Lyrical and moving, Guesthouse for Ganesha weaves a story of daring and courage in a world rentmad by war and destruction.”―Gary Phillips, editor of The Obama Inheritance: Fifteen Stories of Conspiracy Noir

“This young woman’s journey through love, betrayal, dislocation, adaptation, terror, and spiritual discovery is unlike anything I have read before. It is both heartfelt and unexpected.”—Bill Stern, author, curator, and executive director of the Museum of California Design

“In Guesthouse for Ganesha, Esther Grünspan embarks on a journey, leaving her native Poland to arrive in Germany in 1923. She does not know that her journey has only begun—a journey of the heart and the spirit, a journey not only across distances but across time. So too the reader embarks on the journey through this vast and lyrical debut novel that will expand our view of the world, our consciousness, and our compassion.”—Terry Wolverton, author of Insurgent Muse: Life and Art at the Woman’s Building

“Have you ever read a book that begins with the great Indian elephant god Ganesha dancing through the night with a spunky young German woman? Judith Teitelman’s Guesthouse for Ganesha is a truly original novel. I was immediately hooked by that image with its blend of magic realism and a down-to- earth heroine who must grapple with abandonment and her own capacity for fortitude, all under the compassionate gaze of Ganesha, observing and guiding her with his ‘surveillance of souls.’ Teitelman yokes holocausts―both historical and personal―to compassion and possibility, giving us the timeless writerly gift of immersing this reader―and I’m sure many others―in a journey of renewal both archetypal and unprecedented.”― Janet Sternburg, author of The Writer on Her Work, Phantom Limb, and White Matter

“Guesthouse for Ganesha by Judith Teitelman spins a mythic tale with a heart so big it takes two continents and four countries to hold the story of Esther Grünspan, a seamstress whose needlework is as pierced and perfect as the needles in her heart. Teitelman weaves a tale of a seventeen-year-old girl jilted at the wedding chuppah with such extraordinary tenderness and grace . . . Teitelman is a masterful storyteller who knows and loves her characters deeply, and Esther’s courageous rebirth captures a kind of universal longing in all of us to heal our broken hearts.”—Kerry Madden-Lunsford, author and director of Creative Writing at the University of Alabama, Birmingham

“A parable, a prayer, a piece of magic realism, Judith Teitelman’s Guesthouse for Ganesha begins with the (improbable; wondrous) visit of Ganesha, the Hindu elephant deity, to strife-torn 1920s Köln, setting us off on a journey of love, grief, understanding. A feat of (and feast for) the imagination, the novel unfolds in ways at once heartfelt, surprising, inevitable. You will not be sorry you accepted this invitation to voyage.”―Howard A. Rodman, Past President, Writers Guild of America West, screenwriter of Savage Grace and Joe Gould’s Secret, author of Destiny Express, and professor at the University of Southern California)

Judith Teitelman has straddled the worlds of arts, literature and business since she was a teenager, and worked her first job as a salesperson at a B.Dalton/Pickwick Bookstore. Life’s journeys took her from bookstores tocommercial fine art galleries to the nonprofit arts and cultural sector, in which she has worked as staff, consultant and educator for more than three decades. Throughout this time, Teitelman continued her pursuit of all things literary. Guesthouse for Ganesha is her debut novel. She lives in Los Angeles with her husband and three beloved cats.