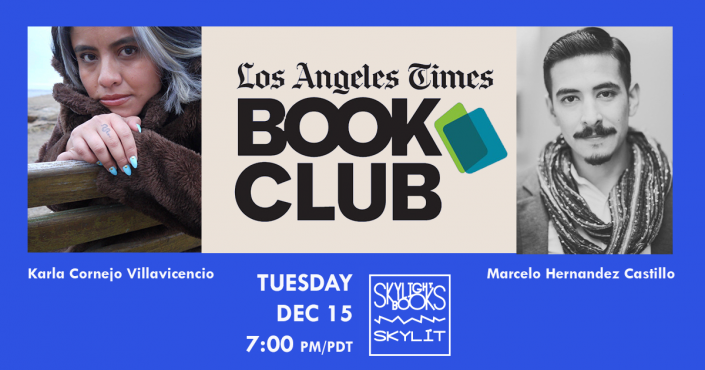 The Undocumented Americans (One World Books)

Writer Karla Cornejo Villavicencio was on DACA when she decided to write about being undocumented for the first time using her own name. It was right after the election of 2016, the day she realized the story she'd tried to steer clear of was the only one she wanted to tell. So she wrote her immigration lawyer's phone number on her hand in Sharpie and embarked on a trip across the country to tell the stories of her fellow undocumented immigrants--and to find the hidden key to her own.

Looking beyond the flashpoints of the border or the activism of the DREAMers, Cornejo Villavicencio explores the lives of the undocumented--and the mysteries of her own life. She finds the singular, effervescent characters across the nation often reduced in the media to political pawns or nameless laborers. The stories she tells are not deferential or naively inspirational but show the love, magic, heartbreak, insanity, and vulgarity that infuse the day-to-day lives of her subjects.

In New York, we meet the undocumented workers who were recruited into the federally funded Ground Zero cleanup after 9/11. In Miami, we enter the ubiquitous botanicas, which offer medicinal herbs and potions to those whose status blocks them from any other healthcare options. In Flint, Michigan, we learn of demands for state ID in order to receive life-saving clean water. In Connecticut, Cornejo Villavicencio, childless by choice, finds family in two teenage girls whose father is in sanctuary. And through it all we see the author grappling with the biggest questions of love, duty, family, and survival.

In her incandescent, relentlessly probing voice, Karla Cornejo Villavicencio combines sensitive reporting and powerful personal narratives to bring to light remarkable stories of resilience, madness, and death. Through these stories we come to understand what it truly means to be a stray. An expendable. A hero. An American.

Born in Ecuador, Karla Cornejo Villavicencio was one of the first DACA (Deferred Action for Childhood Arrivals program) students to graduate from Harvard University. Her book, a finalist for the National Book Award, explores the hidden lives of immigrants in the United States. She has written about immigration, music, beauty, and mental illness for The New York Times, The Atlantic, The New Republic, Glamour, Elle, Vogue, n+1, and The New Inquiry, among others. She lives in New Haven with her partner and their dog.

Children of the Land: A Memoir (Harper Perennial)

When Marcelo Hernandez Castillo was five years old and his family was preparing to cross the border between Mexico and the United States, he suffered temporary, stress-induced blindness. Castillo regained his vision, but quickly understood that he had to move into a threshold of invisibility before settling in California with his parents and siblings. Thus began a new life of hiding in plain sight and of paying extraordinarily careful attention at all times for fear of being truly seen. Before Castillo was one of the most celebrated poets of a generation, he was a boy who perfected his English in the hopes that he might never seem extraordinary.

With beauty, grace, and honesty, Castillo recounts his and his family's encounters with a system that treats them as criminals for seeking safe, ordinary lives. He writes of the Sunday afternoon when he opened the door to an ICE officer who had one hand on his holster, of the hours he spent making a fake social security card so that he could work to support his family, of his father's deportation and the decade that he spent waiting to return to his wife and children only to be denied reentry, and of his mother's heartbreaking decision to leave her children and grandchildren so that she could be reunited with her estranged husband and retire from a life of hard labor.

Children of the Land distills the trauma of displacement, illuminates the human lives behind the headlines and serves as a stunning meditation on what it means to be a man and a citizen.

Castillo, a poet and college professor, has written a memoir about leaving Mexico at age 5 with his family and growing up in California. “When I came undocumented to the U.S., I crossed into a threshold of invisibility,” he writes.

Marcelo Hernandez Castillo is the author of Cenzontle, winner of the A. Poulin, Jr. prize (BOA editions 2018), winner of the 2019 Great Lakes Colleges Association New Writers Award in poetry, a finalist for the Norther California Book Award and named a best book of 2018 by NPR and the New York Public Library. As one of the founders of the Undocupoets campaign, he is a recipient of the Barnes and Noble "Writers for Writers" Award. He holds a B.A. from Sacramento State University and was the first undocumented student to graduate from the Helen Zell Writers Program at the University of Michigan. His work has appeared or is featured in The New York Times, The Paris Review, People Magazine, and PBS Newshour, among others. He lives in Marysville, California where he teaches poetry to incarcerated youth and also teaches at the Ashland University Low-Res MFA program.

Children of the Land: A Memoir (Paperback)