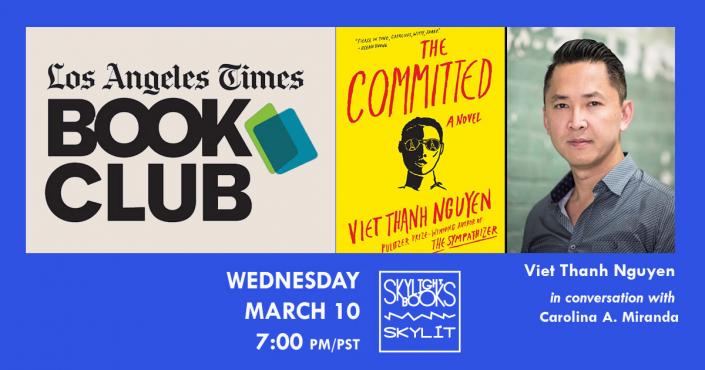 Nguyen’s new novel is a sequel to “The Sympathizer,” which won the Pulitzer Prize for fiction in 2016. “The Sympathizer” told the story of a conflicted double agent in the aftermath of the Vietnam War. The sequel follows Nguyen’s protagonist to Paris.

*Signed (bookplate) copies are available! To purchase yours, just write "signed copy" in the order comments at checkout. Bookplates are available while supplies last.

The long-awaited new novel from one of America's most highly regarded contemporary writers, The Committed follows the unnamed Sympathizer as he arrives in Paris in the early 1980s with his blood brother Bon. The pair try to overcome their pasts and ensure their futures by engaging in capitalism in one of its purest forms: drug dealing.

Traumatized by his reeducation at the hands of his former best friend, Man, and struggling to assimilate into French culture, the Sympathizer finds Paris both seductive and disturbing. As he falls in with a group of left-wing intellectuals whom he meets at dinner parties given by his French Vietnamese "aunt," he finds stimulation for his mind but also customers for his narcotic merchandise. But the new life he is making has perils he has not foreseen, whether the self-torture of addiction, the authoritarianism of a state locked in a colonial mindset, or the seeming paradox of how to reunite his two closest friends whose worldviews put them in absolute opposition. The Sympathizer will need all his wits, resourcefulness, and moral flexibility if he is to prevail.

Both literary thriller and novel of ideas, The Committed is a blistering portrayal of commitment and betrayal that will cement Viet Thanh Nguyen's position in the firmament of American letters.

Viet Thanh Nguyen was born in Vietnam and raised in America. He is the author of The Sympathizer, which was awarded the 2016 Pulitzer Prize for Fiction alongside seven other prizes. He is also the author of the short story collection The Refugees, the nonfiction book Nothing Ever Dies, a finalist for the National Book Award, and is the editor of an anthology of refugee writing, The Displaced. He is the Aerol Arnold Professor of English and American Studies and Ethnicity at the University of Southern California and a recipient of fellowships from the Guggenheim and MacArthur foundations. He lives in Los Angeles.

Praise for The Committed:

"A sumptuous sequel to The Sympathizer . . . The Pulitzer Prize-winning novelist captures, with grace and restraint, the foibles of two young men caught in a duel between East and West."--O, the Oprah Magazine

"An exhilarating roller-coaster ride filled with violence, hidden identity, and meditations on whether the colonized can ever be free . . . The book works both as sequel and standalone, with Nguyen careful to fold in needed backstory, and the author's wordplay continues to scratch at the narrator's fractured sense of self . . . Pleasures abound, such as the narrator's hair-raising escapes, descriptions of the Boss's hokey bar, and thoughtful references to Fanon and Césaire. Nguyen continues to delight."--Publishers Weekly (starred review)

"The conflicted spy of Nguyen's Pulitzer Prize-winning The Sympathizer returns, embroiled in Paris's criminal underworld . . . The pages are rife with prostitutes, drugs, and, in the late pages, gunplay. But, as in The Sympathizer, Nguyen keeps the thriller-ish aspects at a low boil, emphasizing a mood of black comedy driven by the narrator's intellectual crisis . . . Nguyen is deft at balancing his hero's existential despair with the lurid glow of a crime saga. A quirky intellectual crime story that highlights the Vietnam War's complex legacy."--Kirkus Reviews (starred review)

"Call The Committed many things. A white hot literary thriller disguised as a searing novel of ideas. An unflinching look at redemption and damnation. An unblinking examination of the dangers of belief, and the need to believe. A sequel that goes toe to toe with the original then surpasses it. A masterwork."--Marlon James, author of Black Leopard, Red Wolf

"The Committed is nothing short of revelatory. As it haunts, bifurcates, and envelops us in its illumination of all that we have failed to notice about the far reaches of colonization, we are also thrilled by its many turns and charms. This book is fierce, and unrelentingly good. Hilarious and subversive, philosophical and hallucinatory, it is much more than a sequel, more like a necessary appendage in a brilliant and expansive anti-colonial body of work, from the twisted and playful mind of the one and only Viet Thanh Nguyen. Bravo."--Tommy Orange, New York Times-bestselling author of There There

"This follow-up to his seminal The Sympathizer is Nguyen at his most ambitious and bold. Fierce in tone, capacious, witty, sharp, and deeply researched, The Committed marks, not just a sequel to its groundbreaking predecessor, but a sum total accumulation of a life devoted to Vietnamese American history and scholarship. This novel, like all daring novels, is a Trojan Horse, whose hidden power is a treatise of global futurity in the aftermath of colonial conquest. It asks questions central both to Vietnamese everywhere--and to our very species: How do we live in the wake of seismic loss and betrayal? And, perhaps even more critically, How do we laugh?"--Ocean Vuong, New York Times-bestselling author of On Earth We're Briefly Gorgeous

"The Committed, Viet Thanh Nguyen's furious and exhilarating sequel to The Sympathizer, is part gangster-thriller, part searing cultural analysis of the post-colonial predicament, seen through the eyes of a Vietnamese-French mixed race bastard double agent. Paris of forty years ago swirls to life around him, from intellectual salons to filthy toilets--with glimpses of everyone from Johnny Hallyday to Frantz Fanon to Julia Kristeva. Like Ellison's Invisible Man, these novels will surely become classics."--Claire Messud

"An elegy to idealism, Orientalism, and existentialism in all its tragic forms, Nguyen's novel doesn't so much inhabit early eighties Paris, as it pulls the plug on the City of Light. Think of The Committed as the declaration of the 20th 1/2 Arrondissement. A squatter's paradise for those with one foot in the grave and the other shoved halfway up Western civilization's ass."--Paul Beatty

"The Committed is a wonderful successor to The Sympathizer, a splendid tapestry of a novel, full of dubious but richly realized characters. It solidifies what we already know--Viet Thanh Nguyen is a gifted storyteller. It is difficult to know where to start with the praise. The characters have a sad and often tragic complexity, and the language offers a terrific ride for the reader. This is a grand novel full of breathtaking and luminous insights and a pure joy to read. Anticipation is why we come to a book, and joy is why we keep turning page after page. The Committed offers both, and so very much more."--Edward P. Jones, Pulitzer Prize-winning author of The Known World

"The Committed is a rich and exhilarating story of friendship, loyalty, and greed. Set in 1980s Paris, it follows the characters from The Sympathizer as they try to fashion new lives among all the wretched of the earth. Viet Thanh Nguyen gives us an unsparing look at the poisonous effects of ideology--whether colonialism, communism, or capitalism--even as he explores the deep-seated need we all have to believe in something. A deep, compelling and humorous portrait of how we are shaped by fictions others have for us."--Laila Lalami, author of The Other Americans, finalist for the National Book Award

The Sympathizer: A Novel (Pulitzer Prize for Fiction) (Paperback)

Nothing Ever Dies: Vietnam and the Memory of War (Paperback)

Chicken of the Sea (Hardcover)