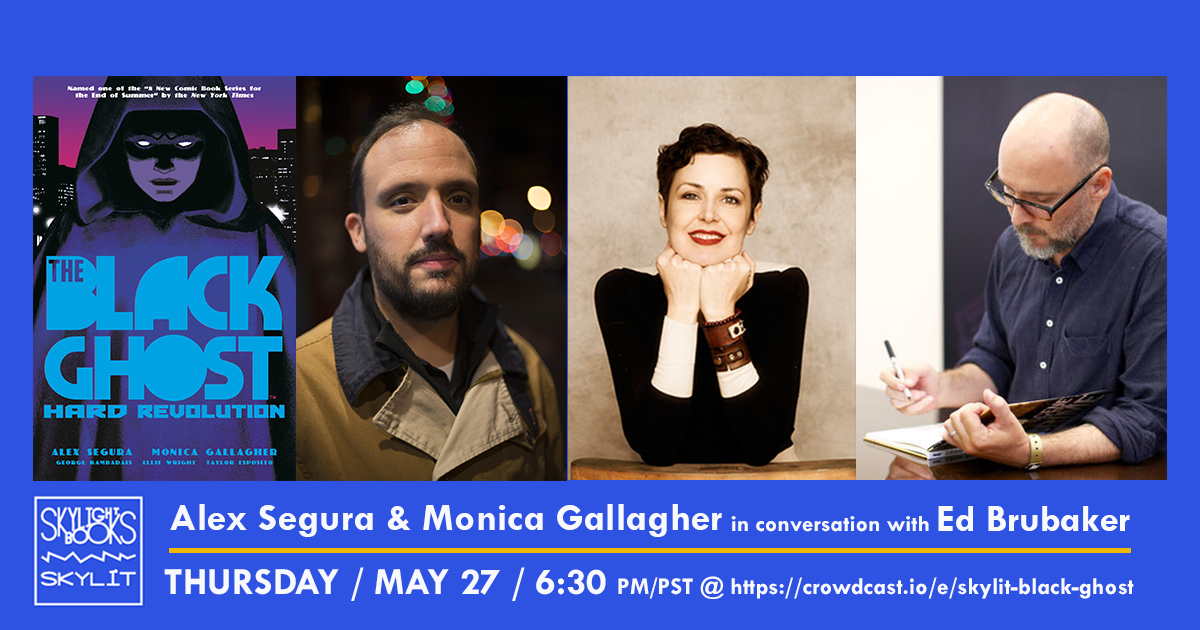 The Black Ghost Volume One, collecting issues #1-5–For the first time in print!

Co-written by Anthony Award-Nominated Novelist Alex Segura and acclaimed writer Monica Gallagher, with art by George Kambadais, colors by Ellie Wright, lettering by Taylor Esposito and edited by Greg Lockard. The Black Ghost is a modern take on the urban vigilante story. Lara Dominguez is a journalist chasing that one, big story. After a stint in the Middle East, the alcoholic reporter moves from her hometown of Miami to Creighton – a mid-Atlantic city that’s seen better days. She needs a huge, viral scoop that’ll send her into the journalistic stratosphere. Her target? Uncovering the identity of The Black Ghost – a masked vigilante trying to take down the wealthy oligarchs carving up the fading metropolis. But as she searches for the breakthrough story she desperately needs, Lara will have to navigate the corruption of her adopted city, the uncertainties of virtue, and her own personal demons.

Monica Gallagher is a writer and illustrator with over fifteen years of experience making comics with a positive, feminist spin. She has published work with Oni Press, Vertigo, Papercutz, and Valiant, self-published several of her own mini-comics and books, and Kickstarted the first collected volume of her webcomic Bonnie N. Collide, Nine to Five. Currently, Monica has two series comics on Webtoons -- Assassin Roommate (which won a Ringo award in 2018 for Best Hero!), and BOO! It’s Sex with Danielle Corsetto. She also co-wrote the first season of Lethal Lit, (mentioned by the New York Times as “A Great Podcast of 2018”!) with Alex Segura for iHeart Radio. Monica resides in Austin with her boyfriend and her enormous ginger cat.

Alex Segura is an acclaimed, award-winning writer of novels, comic books, short stories, and podcasts. He is the author of Star Wars Poe Dameron: Free Fall, the Pete Fernandez Mystery series (including the Anthony Award-nominated crime novels Dangerous Ends, Blackout. and Miami Midnight), and the upcoming Secret Identity (Flatiron Books). His short story “Red Zone” won the 2020 Anthony Award for Best Short Story, and his border noir short story, “90 Miles” will be included in THE BEST AMERICAN MYSTERY AND SUSPENSE STORIES of 2020. He has also written a number of comic books, most notably the superhero noir The Black Ghost, the YA music series The Archies, and the “Archie Meets” collection of crossovers, featuring real-life cameos from the Ramones, B-52s, and more. He is also the co-creator/co-writer of the Lethal Lit crime/YA podcast from iHeart Radio, which was named one of the best podcasts of 2018 by The New York Times. By day he is Co-President of Archie Comics. A Miami native, he lives in New York with his wife and children.

Ed Brubaker is one of the most acclaimed writers in the history of comics, having won the Eisner and Harvey Awards for Best Writer five times. His groundbreaking run on Marvel’s CAPTAIN AMERICA included the creation of the WINTER SOLDIER, who has played a pivotal role in the Marvel movie franchise. But what Brubaker is primarily known for is his crime writing. Brubaker and artist Sean Phillips have spent fifteen years creating a staggering body of original work that has been in high demand for adaptation. Their series CRIMINAL, INCOGNITO, FATALE, THE FADE OUT, and KILL OR BE KILLED, and the new RECKLESS series have sold millions of copies around the world.In film and television, Brubaker was the co-creator with Nicolas Winding Refn of Amazon's TOO OLD TO DIE YOUNG, and served as a Supervising Producer and writer on season one of HBO's WESTWORLD.

Praise for The Black Ghost:

“[The Black Ghost] manages to blend the pulpy sensibilities of the '30s with the inclusivity of modern superhero comics.” –The Hollywood Reporter/Comics Watch

The Black Ghost feels like the kind of story that could fit neatly within The CW lineup, blending both pulp sensibilities alongside contemporary social concerns of millennials who found themselves in a world without heroes and thus had to struggle to become their own.” –The Hollywood Reporter/Comics Watch

“If you enjoy characters such as Jessica Jones, or Captain Marvel, then I’m sure you’d enjoy it.” –Big Shiny Robot

"The Black Ghost is a fun Latina twist on urban noir superheroes. . . .So if you're looking for something new and fresh to satisfy that pulpy itch — if you miss Jessica Jones, or want more street-level Batman stories, or have a craving for a less dude-heavy version of Dennis O'Neill's The Question — the first 5-issue volume of The Black Ghost is a delightful read." –BOING BOING

Friend of the Devil (a Reckless Book) (Hardcover)

My Heroes Have Always Been Junkies (Paperback)

The Fade Out: The Complete Collection (Paperback)