LIVE ON CROWDCAST: ALEXANDRA KLEEMAN discusses SOMETHING NEW UNDER THE SUN with JEFF VANDERMEER 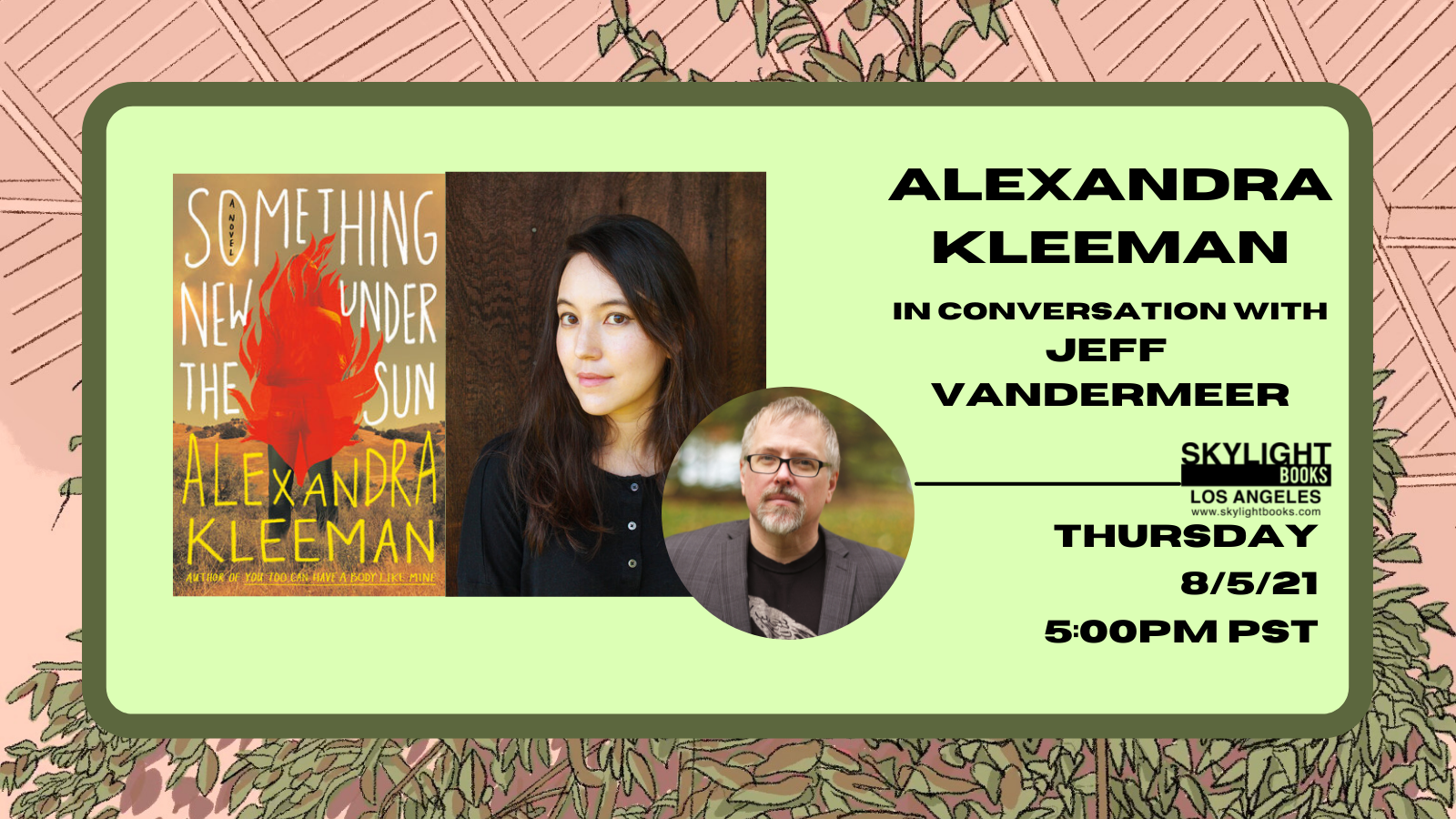 Something New Under the Sun (Hogarth)

East Coast novelist Patrick Hamlin has come to Hollywood with simple goals in mind: overseeing the production of a film adaptation of one of his books, preventing starlet Cassidy Carter’s disruptive behavior from derailing said production, and turning this last-ditch effort at career resuscitation into the sort of success that will dazzle his wife and daughter back home. But California is not as he imagined: Drought, wildfire, and corporate corruption are omnipresent, and the company behind a mysterious new brand of synthetic water seems to be at the root of it all. Patrick partners with Cassidy—after having been her reluctant chauffeur for weeks—and the two of them investigate the sun-scorched city’s darker crevices, where they discover that catastrophe resembles order until the last possible second.

In this often-witty and all-too-timely story, Alexandra Kleeman grapples with the corruption of our environment in the age of alternative facts. Something New Under the Sun is a meticulous and deeply felt accounting of our very human anxieties, liabilities, dependencies, and, ultimately, responsibility to truth.

Alexandra Kleeman is the author of Intimations, a short story collection, and the novel You Too Can Have a Body Like Mine, which was a New York Times Editor’s Choice. Her fiction has been published in The New Yorker, The Paris Review, Zoetrope, Conjunctions, and Guernica, among other publications, and her other writing has appeared in Harper’s, The New York Times Magazine, Vogue, Tin House, n+1, and The Guardian. Her work has received fellowships and support from Bread Loaf, the Djerassi Resident Artists Program, the Virginia Center for the Creative Arts, and the Headlands Center for the Arts. She is the winner of the Berlin Prize and the Bard Fiction Prize, and was a Rome Prize Literature Fellow at the American Academy in Rome. She lives in Staten Island and teaches at the New School.

Jeff VanderMeer’s most recent novel is the eco-thriller Hummingbird Salamander. He is also the author of Dead Astronauts, Borne, and The Southern Reach Trilogy, the first volume of which, Annihilation, won the Nebula Award and the Shirley Jackson Award and was adapted into a movie by Alex Garland. He speaks and writes frequently about issues relating to climate change. VanderMeer lives in Tallahassee, Florida, with his wife, Ann VanderMeer, where they have spent the past three years rewilding their yard to benefit birds and pollinators.

Praise for Something New Under the Sun:

“Throughout, Kleeman writes expressively about place and the manifold ways our lives are shaped by our imperiled environment, foregrounding the slow-motion catastrophe of climate change and its attendant anxieties.”—Vulture

“Because this is an Alexandra Kleeman novel, none of it goes where you think it’s going to, but it’s all so wildly entertaining and beautifully written that it really doesn’t matter where you end up.”—Literary Hub

“Written with tremendous verve and flair, Something New Under the Sun is both an urgent novel about our very near future and a deeply addictive pleasure. Constantly surprising and endlessly inventive, every page is saturated with wit, intelligence, and extraordinary prose. Kleeman is a phenomenon, one of the most brilliant and gifted writers at work today.”—Katie Kitamura

“With this novel, Alexandra Kleeman confirms her place as one of the major writers of her generation. Reading it is like looking at a familiar room through warped glass: What you perceive is distorted and unsettling while remaining curiously beautiful.”—Esmé Weijun Wang

“Something New Under the Sun is a richly rendered ecological novel, characterized not only by how it sets the landscape but also by the fact that the landscape is quite often allowed to run the show. Kleeman is phenomenal when it comes to place writing. Like many of the characters in her book, I got lost inside her scene-setting, arid and wild, happy to let her drive me wherever her genius brain thought we should go. Kleeman is at her very best here. This is a book I’ll be thinking about for years to come.”—Kristen Arnett

“A magnificent and stunning novel, by turns hilarious, satirical, moving, and so very, very much what we need in these uncertain times.”–Jeff VanderMeer

Something New Under the Sun: A Novel (Hardcover)