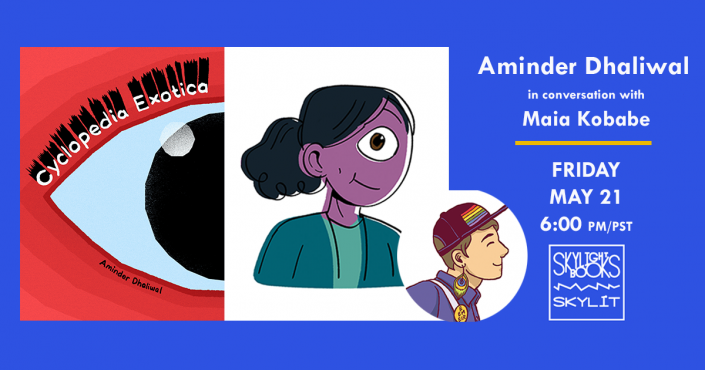 *Signed books and personalizations are available! To receive a signed book, select "signed copy" at checkout. If you'd like a personalization, please write it in the order comments at the bottom of your checkout screen.

“The characters in Dhaliwal’s stories sparkle. They’re tenderly rendered and their problems are real… The struggle of the cyclops unfolds in metaphors for race, sexuality, gender, and disability, tangling with ideas about fetishization, interracial relationships, passing, and representation.”—Carmen Maria Machado, author of In The Dream House

In Cyclopedia Exotica, doctor’s office waiting rooms, commercials, dog parks, and dating app screenshots capture the experiences and interior lives of the cyclops community; a largely immigrant population displaying physical differences from the majority. Whether they’re artists, parents, or yoga students, the cyclops have it tough: they face microaggressions and overt xenophobia on a daily basis. However, they are bent on finding love, cultivating community, and navigating life alongside the two-eyed majority with patience and the occasional bout of rage.

Through this parallel universe, Dhaliwal comments on race, difference, beauty, and belonging, touching on all of these issues with her distinctive deadpan humour steeped in millennial references. Cyclopedia Exotica is a triumph of hilarious candor.

Aminder Dhaliwal is a native of Brampton, Ontario and received a Bachelors of Animation from Sheridan College. She now lives in Los Angeles, where she is the Director at Disney TV Animation. Previously, she worked as a Storyboard Director at Cartoon Network and Storyboard Director on the Nickelodeon show Sanjay and Craig.  She has serialized Woman World biweekly on instagram since March 2017 and has garnered over 120,000 followers. Woman World was nominated for an Ignatz Award for Outstanding Online Comic.

Maia Kobabe is the author/illustrator of GENDER QUEER: A MEMOIR (Oni Press, 2019) and many short comics which have been published online on The Nib, The New Yorker, and in print anthologies. Maia is nonbinary, queer, trans, and uses e/em/eir pronouns.