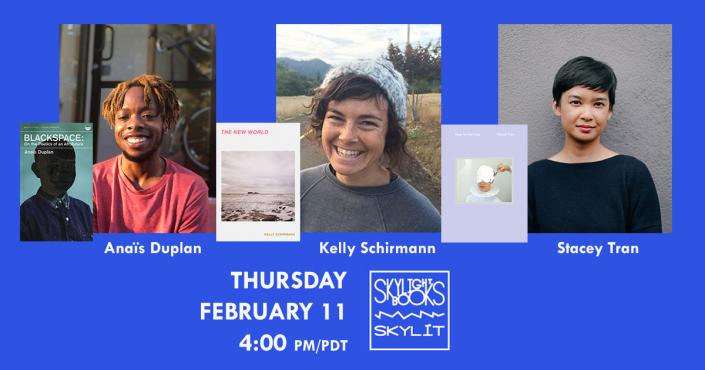 Blackspace: On the Poetics of An Afrofuture (Black Ocean)

Black artists of the avant-garde have always defined the future. Blackspace: On the Poetics of an Afrofuture is the culmination of six years of multidisciplinary research by trans poet and curator Anaïs Duplan about the aesthetic strategies used by experimental artists of color since the 1960s to pursue liberatory possibility. Through a series of lyric essays, interviews with contemporary artists and writers of color, and ekphrastic poetry, Duplan deconstructs how creative people frame their relationships to the word, "liberation." With a focus on creatives who use digital media and language-as-technology—luminaries like Actress, Juliana Huxtable, Lawrence Andrews, Tony Cokes, Sondra Perry, and Nathaniel Mackey—Duplan offers three lenses for thinking about liberation: the personal, the social, and the existential. Arguing that true freedom is impossible without considering all three, the book culminates with a personal essay meditating on the author’s own journey of gender transition while writing the book.

“It would be a gift to read the brilliance of Blackspace in any season, but it feels especially thrilling now. This is futuristic work — work that doesn’t just serve as a reminder that there will be black people in the future, but work that mines for an understanding of what that future will look like. In form, in shape, in language, and in endless vision.”

“Duplan skillfully models radical listening in the relationship he cultivates between the text and its audience, prompting us to reimagine our interactions with artistic tradition and our lives in language.”

“In Duplan’s exquisite (and exquisitely bizarre) vision, survival is effortful; it is massy; it is textural; it is en masse, dependent on group and swarm bodies; it is swarmed with contradiction; yet it is marvelous because it somehow persists.”

Anaïs Duplan is a trans* poet, curator, and artist. He is the author of a book of essays, Blackspace: On the Poetics of an Afrofuture (Black Ocean, 2020), a full-length poetry collection, Take This Stallion (Brooklyn Arts Press, 2016), and a chapbook, Mount Carmel and the Blood of Parnassus (Monster House Press, 2017). He has taught poetry at the University of Iowa, Columbia University, Sarah Lawrence College, and St. Joseph’s College.

His video works have been exhibited by Flux Factory, Daata Editions, the 13th Baltic Triennial in Lithuania, Mathew Gallery, NeueHouse, the Paseo Project, and will be exhibited at the Institute of Contemporary Art in L.A in 2021.

As an independent curator, he has facilitated curatorial projects in Chicago, Boston, Santa Fe, and Reykjavík. He was a 2017-2019 joint Public Programs fellow at the Museum of Modern Art and the Studio Museum in Harlem. In 2016, he founded the Center for Afrofuturist Studies, an artist residency program for artists of color, based at Iowa City’s artist-run organization Public Space One. He works as Program Manager at Recess.

A hybrid collection of poetry and prose, The New World follows the attempts, failures, and re-attempts at understanding and articulating an era of immense social upheaval, political corruption, and environmental consequence. In five distinct sections, the book refracts, explores and investigates these global themes through the realm of the personal and private. Old journals and notes are revisited as a way of understanding the self and its various revisions and mistakes. The New World tells the story of escapism and arrival, growth and decay, and despair and optimism as they occur, often simultaneously, within the mind of our narrator. The book asks, “How do you write poems in a country like this?”, inviting every reader to take stock of themselves, and to reassess the ways “One human world / [empties] completely / into the bigger one.”

Praise for The New World:

“Through poetry and essay, Schirmann weaves sentimentality, irreverence, wit, politics, reflection, research, and philosophy into one harmonious soundtrack of our complicated, modern lives. In lesser hands, the result would be cacophony, but Schirmann’s brilliance alone is convincing connective tissue.”

— The Chicago Review of Books

“[Schirmann] is a striving, musical mystic whose struggle is worked out right on the bandstand. The scope of her energies and the gut-bucket improvisation places her more in the realm of Coltrane and Ayler than anything a pop star would recognize.”

“Kelly Schirmann’s The New World begins with the idea that what we need right now isn’t poetry, but livable wages, ethical accountability, and less consumer-friendly “revolutions” from the arts. It’s an exhortation that doesn’t allow her work to be read with any kind of aesthetically-cushioned escapism, like most poetry does. Because of this, her New World is a heartbreaking alarm. These poems are loud, baying, and bend new light into my eyes. She’s made a siren beautiful. I have no idea how, but I love it.”

“What amazes me about Kelly’s latest work is how it begins in sense-making, argument, discourse, and section by section deconstructs itself so that only the essences of language remain—a fragment here, the lone image of the mythic apple there. It gives me a feral feeling, like language is being dissolved of its centuries of pollution and toxic chalk and returning to a wilderness of its own ungovernable energy. It’s a book that’s here to do that work.”

Kelly Schirmann is a writer, musician, and ceramicist from Northern California. She is the author of Popular Music and The New World, and the co-author, with Tyler Brewington, of Boyfriend Mountain and Nature Machine. Her debut collection, Popular Music, was named among the top poetry books of 2016 by Entropy Magazine and the Chicago Review of Books. She is the founding editor of Black Cake, a record label for contemporary poetry and other experiments that published over 20 digital albums of poetry from 2013-2015. Her music projects include(d) headband (solo), Sung Mountains (with Jay Fiske), and Young Family (with Sam Pink). Other projects include OMO, Public Access, Infinite Trademark, and Americans for Responsible Technology (ART). She currently lives and teaches in Western Montana.

Soap for the Dogs (Gramma)

In her first full-length collection, Stacey Tran's poems navigate the complicated nature of memory in the present tense, gracefully exploring an immigrant history through the paradox of language and time. Never nostalgic yet always charged, Tran interchanges an ode that looks back, forward, up, and down all at once.

Praise for Soap for the Dogs:

“Bilingually laced and sensually pulled from the taut form of her enigmatic being, Stacey Tran’s Soap for the Dogs is a refreshing gastronomic architecture made of razor-sharp, ancestral ingredients, chic aphoristic haikus, and narratively charged self-contained imperial, experimental lines of terse, stark prose. It’s minimal without sacrificing depth and verve. It’s energetic and lush without resorting to prolixity. It has the ability to expand, surprise, and transform itself after your eyes and heart leave the page. Stacey Tran’s first poetry collection is warm, witty, inventive, and piercing. It is elegantly and acutely designed to congeal postmodernity with tradition, poetry with history, family with food while pulling you into the intimate, liminal, tight, flexible, and unexpected spaces of her brilliant imagination.”

““How do you know you want something you’ve never tasted?” Sensual and precise, these poems reflect a keen and vivid perception at work, sampling sense impressions and imagery that is minimal and rich, restrained yet immersed, finding the personally monumental lodged imperceptibly inside the incidental—motel soaps, herbs without names, a head of lettuce balanced on the knees, the spine of a book in her mother’s closet. These are poems full of exquisitely rendered sounds, tastes, colors, and textures, that leave space on the page for the reader to fine-tune their senses. These poems draw gently from an inheritance of her immigrant parents’ object-memories, they suggest that survival lies in the senses, and hence in the body. The seeds in these poems seem to me tuned toward growth and the continuing inevitable bloom of both incident and monument.”

— Dao Strom, author of WE WERE MEANT TO BE A GENTLE PEOPLE

“Soap for the Dogs feels like a collection of miniature fairy tales full of bewitching vegetables, silent contracts, and unlikely transformations. You’re seduced by the silliness of odd images, but the tenderness that peeks out at you between the lines is what keeps you reading.”

Stacey Tran is the author of Soap for the Dogs (Gramma, 2018). Her poems can be found in BOMB Magazine, The Brooklyn Rail, diaCRITICS. In 2017, she created Tender Table, a storytelling series about food, community, identity. The series has featured over 120 storytellers across 9 US cities. Stacey is a member of She Who Has No Master(s), a collective of women writers and artists of the Vietnamese diaspora. She lives in Portland, ME.

Blackspace: On the Poetics of an Afrofuture (Undercurrents) (Paperback)

Soap for the Dogs (Paperback)