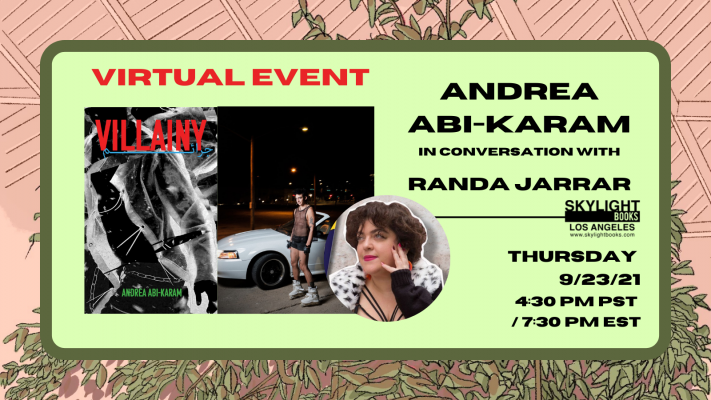 Andrea Abi-Karam answers the call to action for poetry itself to become the radical accomplice it was destined to be in their second book, Villainy. In order to live through the grief of the Ghostship Fire & the Muslim Ban, Villainy foments political action in public spaces, and indexes the various emotional states, such as rage, revelry, fear, grief, and desire to which queers must tend during protest. In scenes loaded with glitter, broken glass, and cum, Abi-Karam insists that in order to shatter the rising influence of new fascism we must embrace the collective work of antifascists, street medics, and queer exhibitionists and that the safety that we risk is reckless and necessary. Disruptive and demanding, these punk poems embody direct action and invite the audience into the desire-filled slippage between public sex and demonstration. At heart, Villainy aims to destroy all levels of hierarchy to establish a participatory, temporary autonomous zone in which the targeted other can thrive.

Andrea Abi-Karam is a trans, arab-american punk poet-performer cyborg and author of EXTRATRANSMISSION (Kelsey Street Press, 2019), a poetic critique of the U.S. military’s role in the War on Terror. With Kay Gabriel, they co-edited We Want It All: An Anthology of Radical Trans Poetics (Nightboat Books, 2020). Simone White selected their second assemblage, Villainy, as winner of the NOS Prize for publication in September 2021 at Nightboat Books. They are a leo obsessed with queer terror and convertibles.

Randa Jarrar is the author of the memoir Love Is An Ex-Country, the novel A Map of Home, and the collection of stories Him, Me, Muhammad Ali. She is also a performer who has appeared in independent films and in the TV show RAMY. Her essays have appeared in The New York Times Magazine, Salon, Bitch, Buzzfeed, and elsewhere. She is a recipient of a Creative Capital Award and an American Book Award, as well as awards and fellowships from the Civitella Ranieri Foundation, the Lannan Foundation, Hedgebrook, PEN, and others. She lives in Los Angeles.

“Andrea I like your experience. Thanks thanks thanks for this frank obtuse poetix, this wriggling book. Its wisdom is when I think I’ve summed it up it’s something else – action and spatial, flat versatile wily & interior maybe even yeah poetic in that way only prose can be but CAPS-STRONG, manifesting today. Oh and here’s my favorite line: resist the present approach impurity. Yessss!” ―Eileen Myles

“In an industry that encourages the toothless, Andrea Abi-Karam’s propulsive Villainy calls: ‘give the poem teeth.’ In an industry that incants, this book incites, revealing the revolutionary potential of desire, of determined disfiguration, of poetry itself, which, in Abi-Karam’s hands and ways becomes, as the street, a site of unbounded action. Here is a poetry that demolishes poetry. A fire to our fascist order. A book fully alive.” ―Solmaz Sharif

“If we are to start again, ‘renewed or better,’ Villainy insists, we’ll first suffer the pain of radical un-making. Willingness to suffer such pains, in, for example, the desire to be ‘flat’ (which would hurt) constitutes villainy while the world belongs to ‘1. CAPITALISM 2. THE STATE 3. COLONIALISM 4. NAZIS 5. RACISM 6. OPPRESSION.’ This is a text that performs the awful compression – squeezing – of our capacities collectively to deal with reckless disrespect for life not just under this government. This book is fire. But not to burn-it-down. To light my way to a friend.” ―Simone White

We Want It All: An Anthology of Radical Trans Poetics (Paperback)