LIVE ON CROWDCAST: CATIE DISABATO discusses her new novel U UP? with IVY POCHODA 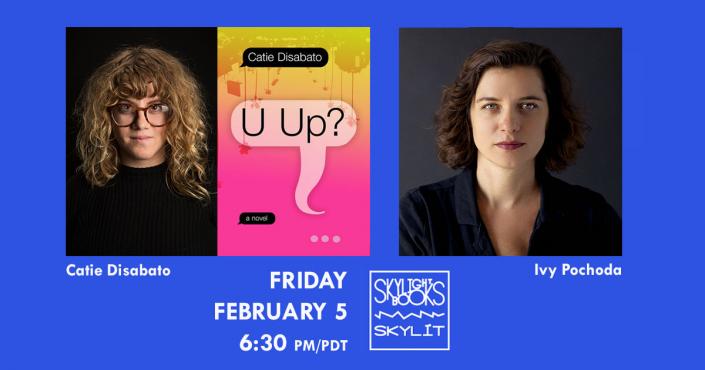 U Up? (Melville House Publishing)

In the follow up to her smart debut, The Ghost Network, Catie Disabato creates a vivid portrait of a young woman investigating her best friend’s disappearance while navigating codependent friendships, toxic exes, and witchy rituals

Eve has a carefully curated online life, works occasionally, and texts constantly with her best friend, Ezra. Basically, she is an archetypal L.A. millennial. She has also been carrying on a year-long conversation with her deceased friend Miggy over text. But when Ezra goes missing on the anniversary weekend of Miggy’s death, Eve feels like her world is shattering.

Over a frantic weekend Eve investigates Ezra’s disappearance, scouring social media for clues, while drowning her anger and anxiety in drinks, drugs, and spiritual cleansing. Eve starts to spiral as her friends try to convince her that she’s overreacting, and ghosts–both real and metaphorical–continue to haunt her. When she uncovers clues to a life Ezra kept hidden, Eve starts to question how much she really knows about her best friend…and herself.

In U Up? Catie Disabato holds a mirror to the ways the phantom selves we create online permeate our emotional lives and hide our worst traits from everyone, including ourselves.

“This heady, sexy novel is filled with the carefree wildness of youth, with an added metaphysical bonus. Eve’s voice is enticing and compelling, and readers will be carried along with her as she learns more about herself than she ever planned.” —Booklist

“A poignant . . . story of grief, ghosts, and friendship . . . Disabato makes [the characters] come alive on the page and in her texts.” —Publishers Weekly

“Disabato is a generational voice and a voice of a generation. U Up is smart, sharp, wise, and wrenching in equal measure . . . An enviable book by an enviable writer. I loved it.” —Ivy Pochoda, author of These Women

“What a terrific, frisky novel! U Up? . . . transcends genre, and is such fun to read. Disabato’s writing is at once so smooth and sharp that you don’t immediately realize it’s cut you—and deeply. She is a remarkable talent.” —Edan Lepucki, author of Woman No. 17

“Disabato captures LA’s nightlife (and daylife!) in all of its beauty, impropriety, and conspicuous consumption as if she were the Eve Babitz of the Instagram Age. U Up? is a delight.” —Maris Kreizman, author of Slaughterhouse 90210

Catie Disabato's first novel, The Ghost Network, was deemed “a smart and thorny debut” that “reveals treasures” to readers, according to The New York Times. Disabato has written essays and criticism for outlets including the LAist, Buzzfeed, and LA Weekly. She lives in Los Angeles.

Ivy Pochoda is the author of the critically acclaimed novels Wonder Valley, Visitation Street and These Women. Wonder Valley won the 2018 Strand Critics Award for Best Novel and was a finalist Los Angeles Times Book Prize and Le Grand Prix de Litterature Americaine, as well as being chosen as an NPR and Los Angeles Times Book of the Year. Visitation Street won the Prix Page America in France and was chosen as an Amazon Best Book of the Month, Amazon Best Book of 2013, and a Barnes & Noble Discover Great New Writers selection. Her books have been translated into five languages. Her writing has appeared in The New York Times, The Wall Street Journal, The Los Angeles Times & The Los Angeles Review of Books. Her first novel The Art of Disappearing, was published by St. Martin’s Press in 2009. She teaches creative writing at the Studio 526 Skid Row.

The Ghost Network: A Novel (Paperback)

These Women: A Novel (Hardcover)