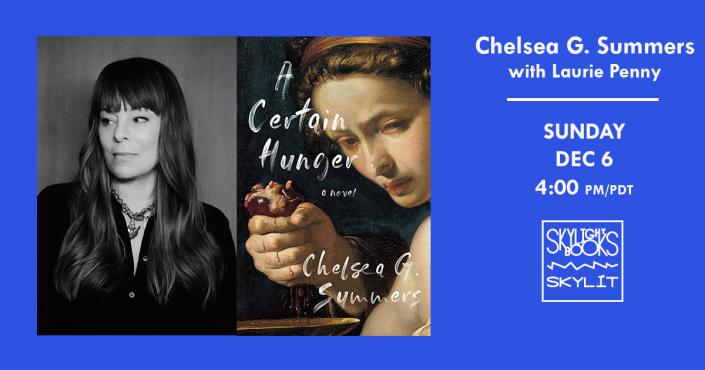 *Please note that this event will take place on Crowdcast. Register here to watch the event live or to replay it after the event.

Food critic Dorothy Daniels loves what she does. Discerning, meticulous, and very, very smart, Dorothy's clear mastery of the culinary arts make it likely that she could, on any given night, whip up a more inspired dish than any one of the chefs she writes about.

Dorothy loves sex as much as she loves food, and while she has struggled to find a long-term partner that can keep up with her, she makes the best of her single life, frequently traveling from Manhattan to Italy for a taste of both. But there is something within Dorothy that's different from everyone else, and having suppressed it long enough, she starts to embrace what makes Dorothy uniquely, terrifyingly herself. Recounting her life from a seemingly idyllic farm-to-table childhood, the heights of her career, to the moment she plunges an ice pick into a man's neck on Fire Island, Dorothy Daniels show us what happens when a woman finally embraces her superiority.

A satire of early foodieism, a critique of how gender is defined, and a showcase of virtuoso storytelling, Chelsea G. Summers' A Certain Hunger introduces us to the food world's most charming psychopath and an exciting new voice in fiction.

Chelsea G. Summers is a freelance writer whose work focuses on sex, politics, tech, fashion and culture. She is a former academic and professor with Ph.D. training in eighteenth-century British literature, a discipline that has proven to be shockingly useful when writing about contemporary culture. She was a columnist for the now defunct ADULT magazine, has a piece upcoming in Roxane Gay's Medium series, and her work has appeared in VICE, Fusion, Hazlitt, The New Republic, Racked, and The Guardian. She splits her time between New York and Stockholm, Sweden, and can be found on twitter @chelseagsummers. This is her first novel.

Laurie Penny is an award-winning author, columnist, journalist, and screenwriter. Her seven books include Bitch Doctrine (Bloomsbury 2017), Unspeakable Things (Bloomsbury 2014) and Everything Belongs To The Future (Tor, 2016).  As a freelance journalist, she writes essays, columns and longform features about politics, social justice, pop culture, feminism, mental health, technology for lots and lots and lots of places, including The Guardian, Longreads, Time Magazine, Buzzfeed, The New York Times, Vice, Salon, The Nation, The New Statesman, The New Inquiry, Tor.com and Medium. Her short stories have been published by Tor.com, Terraform and in collections for MacMillan and Nautilus Press. She was a 2014-15 Nieman Journalism Fellow at Harvard University. As a screenwriter, Laurie has worked on ‘The Nevers’. (HBO), Netflix’s ‘The Haunting’ and Amazon’s ‘Carnival Row’. When she’s not on the road, Laurie is based between London and Los Angeles.

Everything Belongs to the Future (Paperback)

Penny Red: Notes from the New Age of Dissent (Paperback)