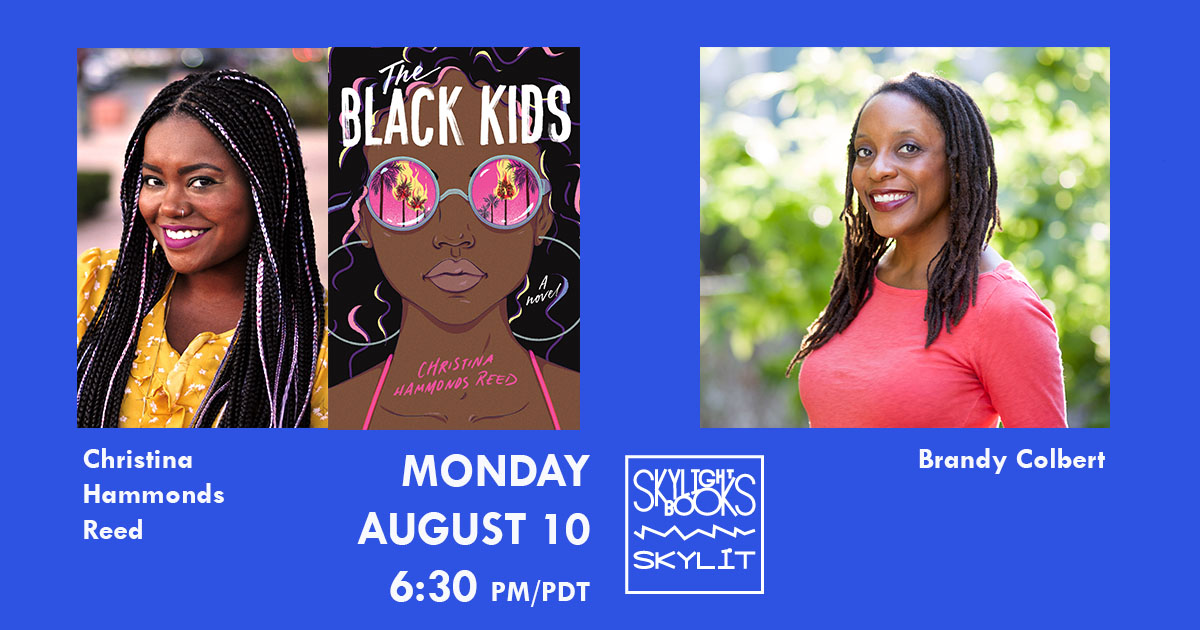 Please note: This event will take place live on Crowdcast. RSVP here to save your spot!

“Infused with honesty, heart, and humor, The Black Kids is a true love letter to Los Angeles, highlighting the beauty and flaws of the city, and the people who call it home.” —Brandy Colbert, award-winning author of Little & Lion

Perfect for fans of The Hate U Give, this unforgettable coming-of-age debut novel explores issues of race, class, and violence through the eyes of a wealthy black teenager whose family gets caught in the vortex of the 1992 Rodney King Riots.

Ashley Bennett and her friends are living the charmed life. It’s the end of senior year and they’re spending more time at the beach than in the classroom. They can already feel the sunny days and endless possibilities of summer.

Everything changes one afternoon in April, when four LAPD officers are acquitted after beating a black man named Rodney King half to death. Suddenly, Ashley’s not just one of the girls. She’s one of the black kids.

As violent protests engulf LA and the city burns, Ashley tries to continue on as if life were normal. Even as her self-destructive sister gets dangerously involved in the riots. Even as the model black family façade her wealthy and prominent parents have built starts to crumble. Even as her best friends help spread a rumor that could completely derail the future of her classmate and fellow black kid, LaShawn Johnson.

With her world splintering around her, Ashley, along with the rest of LA, is left to question who is the us? And who is the them?

Praise for The Black Kids:

“I’ve never read a book that so aptly delves into the harrowing shift from black girl to black woman, while chronicling one of the most resounding examples of systemic racism in recent American history. Should be required reading in every classroom.”—Nic Stone, #1 New York Times bestselling author of Dear Martin

“Infused with honesty, heart, and humor, The Black Kids is a true love letter to Los Angeles, highlighting the beauty and flaws of the city, and the people who call it home.”—Brandy Colbert, award-winning author of Little & Lion

“A brilliantly poetic take on one of the most defining moments in Black American history.”—Tiffany D. Jackson, author of Grown and Monday’s Not Coming

"A timely exploration of ’90s Los Angeles during racial upheaval and one girl's awakening."– Kirkus Reviews

Christina Hammonds Reed holds an MFA from the University of Southern California’s School of Cinematic Arts. A native of the Los Angeles area, her work has previously appeared in the Santa Monica Review and One Teen Story. The Black Kids is her first novel.

Brandy Colbert is the award-winning author of Little & Lion, Pointe, and Finding Yvonne, and the forthcoming The Revolution of Birdie Randolph. Her short fiction and essays have been published in several critically acclaimed anthologies for young people. She is on faculty at Hamline University's MFA program in writing for children, and lives in Los Angeles.

The Only Black Girls in Town (Hardcover)

The Revolution of Birdie Randolph (Hardcover)