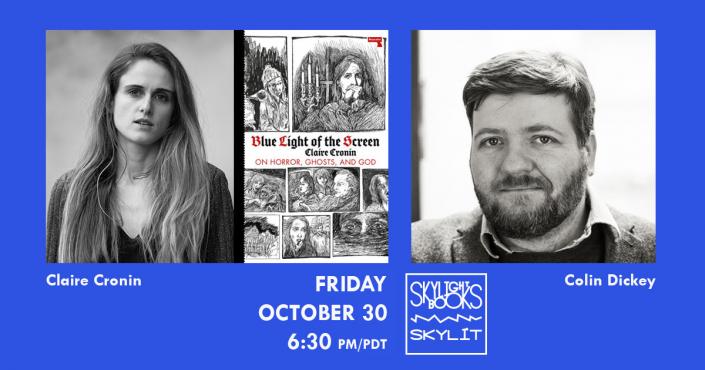 *Please note: this event will take place live on Crowdcast. RSVP here to save your seat or watch the replay!

Blue Light of the Screen is about what it means to be afraid — about immersion, superstition, delusion, and the things that keep us up at night.

A creative-critical memoir of the author’s obsession with the horror genre, Blue Light of the Screen embeds its criticism of horror within a larger personal story of growing up in a devoutly Catholic family, overcoming suicidal depression, uncovering intergenerational trauma, and encountering real and imagined ghosts.

As Cronin writes, she positions herself as a protagonist who is haunted by what she watches and reads, like an antiquarian in an M.R. James ghost story whose sense of reality unravels through her study of arcane texts and cursed archives. In this way, Blue Light of the Screen tells the story of the author’s conversion from skepticism to faith in the supernatural.

Part memoir, part ghost story, and part critical theory, Blue Light of the Screen is not just a book about horror, but a work of horror itself.

Praise for Blue Light of the Screen:

“An original, compelling and genuinely unclassifiable book that is by turns insightful, moving and disturbing — as well as an informative introduction to cinematic horror.” —Francis Young, author of A History of Exorcism in Catholic Christianity

“Blue Light of the Screen is a different kind of book. Cronin allows not just one voice to speak, but a legion of voices: critical but confessional, filled with dread and then a strange euphoria, marred by faith yet undermined by reason… This is critical theory as demonic possession.” - Eugene Thacker, Infinite Resignation and In the Dust of This Planet

“Equal parts memoir, genre study, and family melodrama, Cronin’s book suggests that the ghost isn’t out there in the world to be found so much as an internal force to be confronted, a composite of memory and metaphysics that issues from the borderlands of trauma, melancholy, faith, and (media) fictions unique to every haunted individual.” — Jeffrey Sconce, author of Haunted Media: Electronic Presence from Telegraphy to Television and the Technical Delusion: Electronics, Power, Insanity

“A striking memoir of a demon-haunted life… Cronin elegantly articulates the way horror (from the art house to the grindhouse) is often the most personal genre, leaving its viewers with powerful metaphors to decode the sometimes even more terrifying world on the other side of the screen.” - Rodney Ascher, screenwriter of Room 237 and The Nightmare

“A dreamlike, at times hallucinatory journey through memory and nightmare. Cronin’s fragmentary approach takes a litany of horror movies as grist to explore deeper questions of uncanny belief. A strange and thoroughly enjoyable read.” - Colin Dickey, author of Ghostland

Claire Cronin is a writer and musician currently based in California. She has published poetry and nonfiction and is the author of the chapbook A Spirit is a Mood Without a Body. As a musician, Cronin has released records on independent labels, toured nationally, and been featured in Pitchfork and The FADER.

Colin Dickey is a writer, speaker, and academic, and has made a career out of collecting unusual objects and hidden histories all over the country. He’s a regular contributor to the LA Review of Books and Lapham’s Quarterly, and is the co-editor of The Morbid Anatomy Anthology.He is also a member of the Order of the Good Death, a collective of artists, writers, and death industry professionals interested in improving the Western world’s relationship with mortality. With a PhD in comparative literature from the University of Southern California, he is an associate professor of creative writing at National University.

Blue Light of the Screen: On Horror, Ghosts, and God (Paperback)

The Unidentified: Mythical Monsters, Alien Encounters, and Our Obsession with the Unexplained (Hardcover)

Afterlives of the Saints: Stories from the Ends of Faith (Hardcover)