LIVE ON CROWDCAST: CLAIRE PHILLIPS discusses her debut memoir A ROOM WITH A DARKER VIEW with EMILY RAPP BLACK 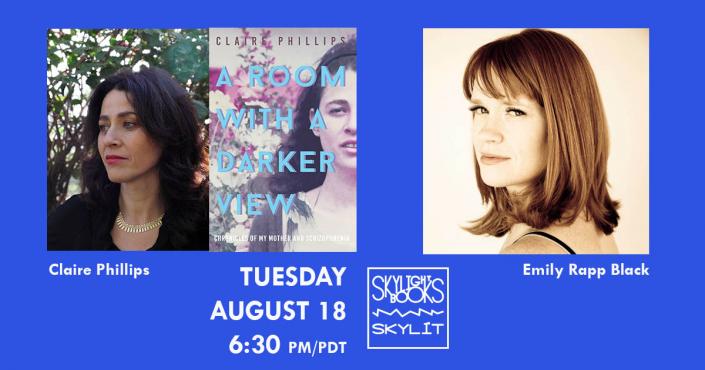 A Room With a Darker View (Doppelhouse)

A daughter breaks the family silence about her mother’s schizophrenia, reframing hospitalizations, paranoia, illness, and caregiving through a feminist lens.

Claire Phillips’ elegantly written and unflinching memoir about her mother, an Oxford-trained lawyer diagnosed in mid-life with paranoid schizophrenia, challenges current conceptions about mental illness, relapse and recovery, as well as difficulties caring for an aging parent with a chronic disease. Told in fragments, the work also becomes a startling reflection on mother-daughter relationships during the evolution of 20th-century feminism.Only with her mother’s final relapse at age 73 did the author begin to tell this story, first in Black Clock magazine, an essay for which she received a Pushcart nomination and notable mention in The Best American Essays 2015.

Praise for A Room With a Darker View:

As heroic as it is original, Claire Phillips’ writing always finds the scary corners that would be secret to any other author, from which inevitably there comes into vision a revelatory perspective. Reading A Room With a Darker View, you won’t shake it from your mind; finishing it, you won’t shake it from your memory.
– Steve Erickson, author of Zeroville and Shadowbahn

An engrossing story of identity formation, Phillips ultimately gives us not a confessional memoir but a parable of agency and resilience amid uncertain reality. As a speculative fiction writer whose work is rooted in an encyclopedic knowledge of science fiction, she crafts a tale of time travel, one where past-present-futures collapse into braided familial, personal, and social histories. Throughout the book Phillips illuminates the fierce reality of her mother’s delusions as well as the tools she gives her daughter to survive her.
–Connie Samaras

Short, distilled chapters of quietly tantalizing prose grip us throughout the span of Claire Phillips’ fully realized and haunting story.
–Bruce Bauman, author of And the Word Was and Broken Sleep

Claire Phillips is the author of the novella Black Market Babies and recipient of the American Academy of Poets, First Prize. Her writing has appeared in Black Clock magazine, Los Angeles Review of Books, and MotherBoard-Vice, among other places. She was nominated for the Pushcart Prize and given a notable mention in The Best American Essays 2015. She teaches writing at CalArts, the Southern California Institute for Architecture (SCI-Arc), University of California, Irvine, and is Director of the Los Angeles Writers Reading Series at Glendale College. She holds a M.A. in Creative Writing from New York University, and a B.A. in English from San Francisco State University.

Emily Rapp Black is the author of Poster Child: A Memoir (Bloomsbury USA)  and The Still Point of the Turning World (Penguin Press), which was a New York Times Bestseller, an Editor's Pick, and a finalist for the PEN Center Literary Award in Nonfiction. Her essays have appeared or are forthcoming in VOGUE, LENNY LETTER, the New York Times, Salon, Slate, Huffington Post, the Sun, TIME, Brain.Child, the Rumpus, Role/Reboot, O the Oprah Magazine, the Nervous Breakdown, The Establishment, Bodega, Good Housekeeping, the Los Angeles Times, and other publications and anthologies, including The Modern Loss Anthology (Harper/Wave) and O' s Little Guide to Starting Over (Flatiron Books).

A Room with a Darker View: Chronicles of My Mother and Schizophrenia (Paperback)

The Still Point of the Turning World (Paperback)