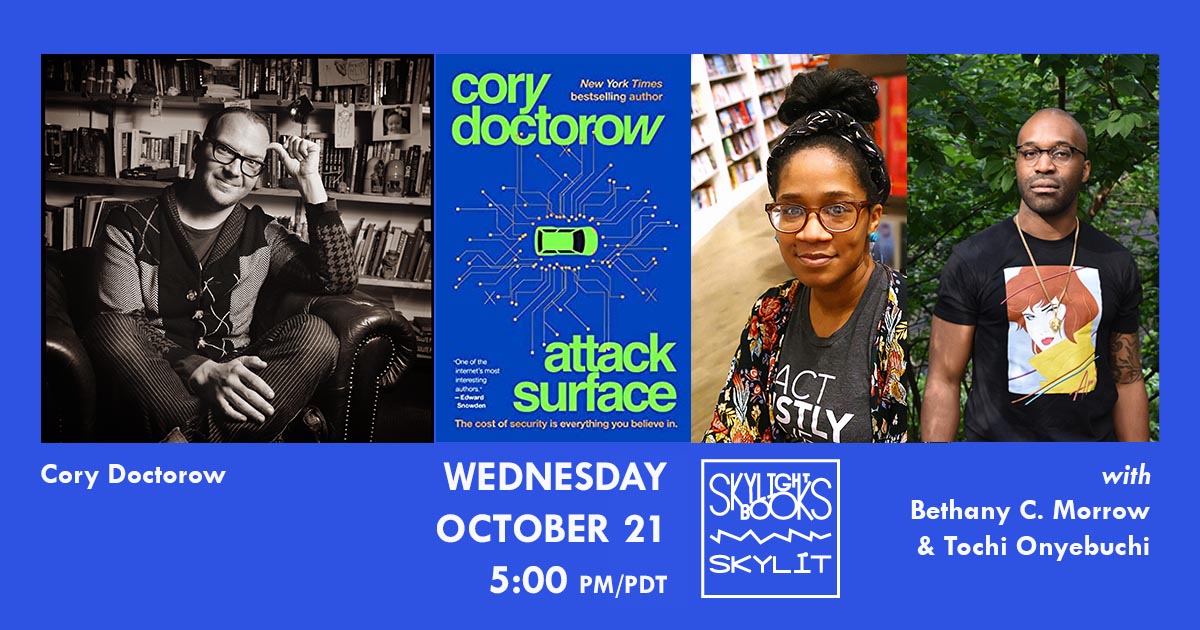 Please note: This event will take place live on Crowdcast. RSVP here to join the livestream or watch the replay!

Join Cory Doctorow for a lecture series in celebration of his new novel, ATTACK SURFACE! Doctorow will be speaking on a different topic at each event, where he will be joined by esteemed guests.

Most days, Masha Maximow was sure she'd chosen the winning side.

In her day job as a counterterrorism wizard for an transnational cybersecurity firm, she made the hacks that allowed repressive regimes to spy on dissidents, and manipulate their every move. The perks were fantastic, and the pay was obscene.

Just for fun, and to piss off her masters, Masha sometimes used her mad skills to help those same troublemakers evade detection, if their cause was just. It was a dangerous game and a hell of a rush. But seriously self-destructive. And unsustainable.

When her targets were strangers in faraway police states, it was easy to compartmentalize, to ignore the collateral damage of murder, rape, and torture. But when it hits close to home, and the hacks and exploits she’s devised are directed at her friends and family--including boy wonder Marcus Yallow, her old crush and archrival, and his entourage of naïve idealists--Masha realizes she has to choose.

And whatever choice she makes, someone is going to get hurt.

Cory Doctorow is a regular contributor to the Guardian, Locus, and many other publications. His award-winning novel Little Brother was a New York Times bestseller, as is its sequel, Homeland. His novella collection Radicalized was a CBC Best Fiction of 2019 selection. Born and raised in Canada, he lives with his family in Los Angeles.

Bethany C. Morrow is a recovering expat recently returning from six years in Montreal, Quebec, to live and write in north country New York. A California native, Bethany graduated from the University of California, Santa Cruz with a BA in Sociology. Following undergrad, she studied Clinical Psychological Research at the University of Wales, Bangor, in Great Britain before returning to North America to focus on her literary work. She is the author of the adult novel Mem (Unnamed Press) and the editor of the young adult anthology Take the Mic (Arthur A. Levine Books).

Tochi Onyebuchi is the author of Beasts Made of Night, its sequel Crown of Thunder, War Girls, and his adult fiction. debut Riot Baby, published by Tor.com in January 2020. He has graduated from Yale University, New York University’s Tisch School of the Arts, Columbia Law School, and L’institut d’études politiques with a Masters degree in Global Business Law. His short fiction has appeared in Asimov's Science Fiction, Omenana, Black Enough: Stories of Being Young & Black in America, and elsewhere. His non-fiction has appeared in Uncanny Magazine, Nowhere Magazine, Tor.com and the Harvard Journal of African-American Public Policy. He is the winner of the Ilube Nommo Award for Best Speculative Fiction Novel by an African and has appeared in Locus Magazine's Recommended Reading list.

Someone Comes to Town, Someone Leaves Town: A Novel (Paperback)

A Song Below Water: A Novel (Hardcover)

Beasts Made of Night (Paperback)