LIVE ON CROWDCAST: DAN O'BRIEN launches A STORY THAT HAPPENS and OUR CANCERS with NEEL KELLER & LISA AMPLEMAN 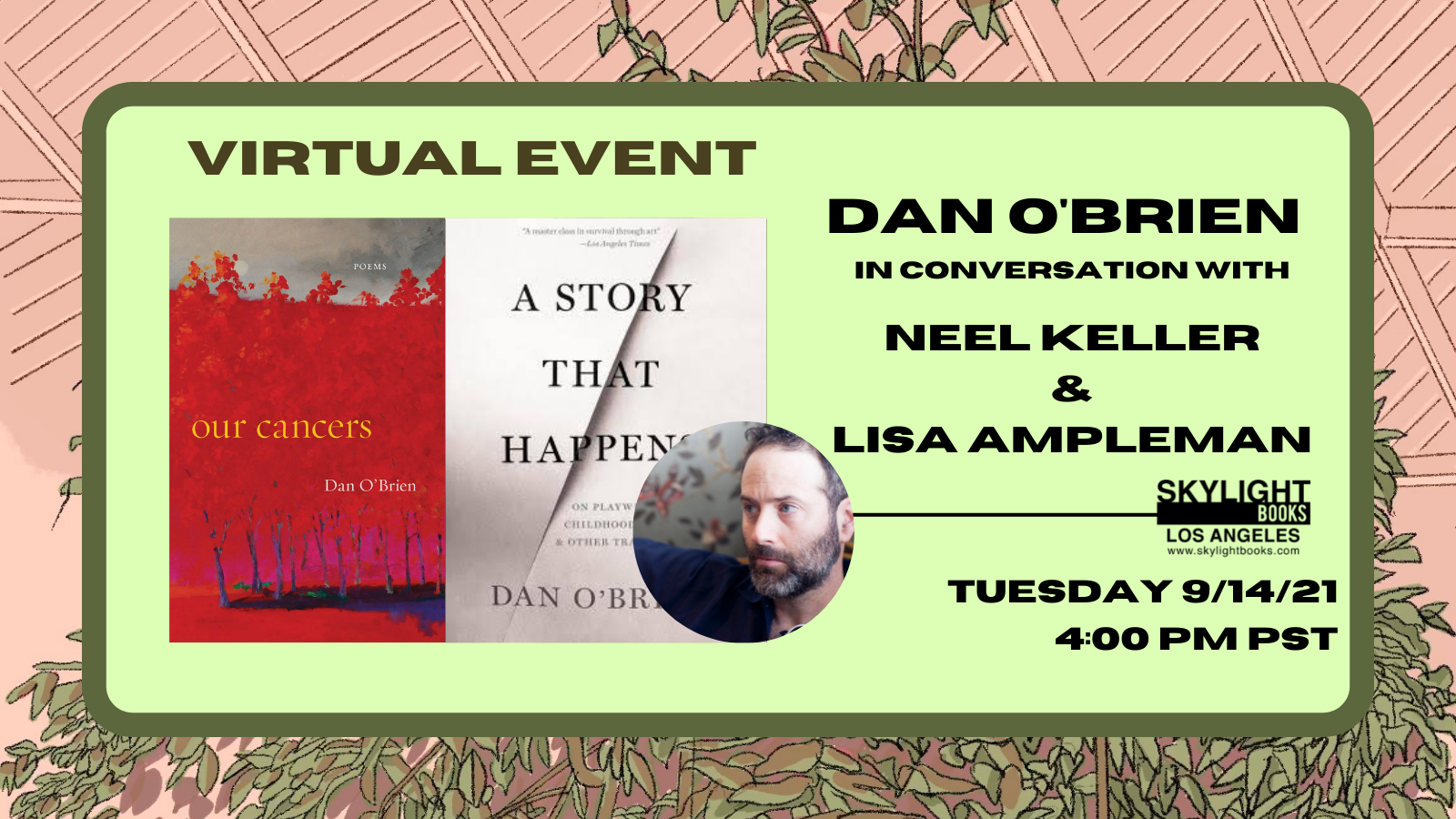 We are delighted to present a double book launch for A Story that Happens and Our Cancers by Dan O'Brien!

A Story that Happens: On playwriting, childhood, & other traumas (Dalkey Archive)

Originally written as a series of craft lectures delivered at the annual Sewanee  Writers’ Conference in 2017-2020, A Story That Happens offers practical  reflections on techniques of storytelling in the theatre that are also relevant to  other disciplines, and to creativity in general. This book is simultaneously a  deeply personal memoir, as O’Brien relates his craft to his and his wife’s  cancer experience, and to his childhood abuse. Despite their subject matter,  these essays are entertaining and inspiring as they offer hard-won insights into  what stories are for and the reasons why, “afraid and hopeful,” we begin to tell  them. This book is a love letter to the theatre from a dedicated and impassioned practitioner, lyrically articulating the need to write boldly in times  of personal and political trauma.

In 2015 on the anniversary of 9/11 — an event that may have contributed to  their cancers, as their downtown apartment had been suffused with the World  Trade Center’s carcinogenic dust — O’Brien’s wife, TV and film actor Jessica St. Clair, discovered a lump in her breast and was subsequently treated with  surgery and chemotherapy. On the day of her final infusion, O’Brien himself  learned that he had colon cancer and would undergo his own  intensive treatment over the next nine months.

A Story That Happens was written in the wake of this trauma, and during a  period of societal trauma. As O’Brien explains in his preface: “In the January of  the new president’s inauguration, I was timidly venturing forth from the cave of  my convalescence when I felt an overriding urge to reexamine and challenge  who I was as a writer, just as the country’s identity would be reexamined and  challenged in the years ahead…. Above all my goal in writing these essays is  to articulate why the theatre and writing for it matters. To elucidate how the  endeavor of serious theatre-making is not frivolous or ornamental, but an  existential struggle to justify, comprehend, and even alter who we are.” The  book concludes with a chapter written during the ongoing pandemic that sounds a note of hope for survivors: “And when it is all over…we may have  forgotten who we were. Who we are. We will have to find out. And the theatre  as always will show us.”

Poet and playwright Dan O’Brien chronicles the year and a half during which both he and his wife were treated for cancer.

On the fourteenth anniversary of 9/11—an event that caused their downtown apartment to become “suffused with the World Trade Center’s carcinogenic dust”—Dan O’Brien’s wife discovers a lump in her breast. Surgery and chemotherapy soon follow, and on the day of his wife’s final infusion, O’Brien learns of his own diagnosis. He has colon cancer and will need to undergo his own intensive treatment over the next nine months.

Our Cancers is a compelling account of illness and commitment, of parenthood and partnership. This spare and powerful sequence creates an intimate mythology that seeks meaning in illness while also celebrating the resilience of sufferers, caregivers, and survivors.

As O’Brien explains in an introduction, “The consecutiveness of our personal disasters, with a daughter not yet two years old at the start of it, was shattering and nearly silencing. At hospital bedsides, in hospital beds myself, and at home through the cyclical assaults of our therapies, these poems came to me in fragments, as if my unconscious were attempting to reassemble our lives, our identities and memories . . . as if I were in some sense learning how to speak again.”

Dan O’Brien is a playwright, poet, and essayist whose recognition includes a Guggenheim Fellowship in Drama, the Horton Foote Prize, the Edward M. Kennedy Prize, and two PEN America Awards for Drama. His plays include The Body of an American and The House in Scarsdale: A Memoir for the Stage, among many others. His books of poetry are War Reporter, winner of the UK’s Fenton Aldeburgh Prize, Scarsdale, and New Life. He lives in Los Angeles with his wife, actor and writer Jessica St. Clair, and their daughter Isobel. www.danobrien.org

Neel Keller is a director, dramaturg and producer who spends most of his time on the development of new work. As Center Theatre Group’s Associate Artistic Director/Literary Director, he has collaborated on the development and production of a wide range of plays and musicals. As a director, his recent productions include the world premieres of Julia Cho’s Office Hour, Eliza Clark’s Quack, Jennifer Haley’s The Nether, Kimber Lee’s different words for the same thing, and Dael Orlandersmith’s Until The Flood. His productions have been mounted at many theaters, including, The Public Theater, New York Theater Workshop, La Jolla Playhouse, Mark Taper Forum, Kirk Douglas Theater, and internationally, at Ireland’s Abbey Theater, the Galway International Arts Festival, the Edinburgh Fringe Festival and London’s Arcola Theatre. Neel is an Honors Graduate of Oberlin College and a member of the Stage Directors and Choreographers Society and the Directors Guild of America.

Lisa Ampleman is the author of two books of poetry, most recently Romances (LSU Press, 2020), and a chapbook. She lives in Cincinnati, where she is the managing editor of The Cincinnati Review and poetry series editor at Acre Books.

Praise for A Story That Happens:

"...a master class in surviving  through art." Margaret Gray, The Los  Angeles Times

A Story That Happens: On Playwriting, Childhood, & Other Traumas (Paperback)