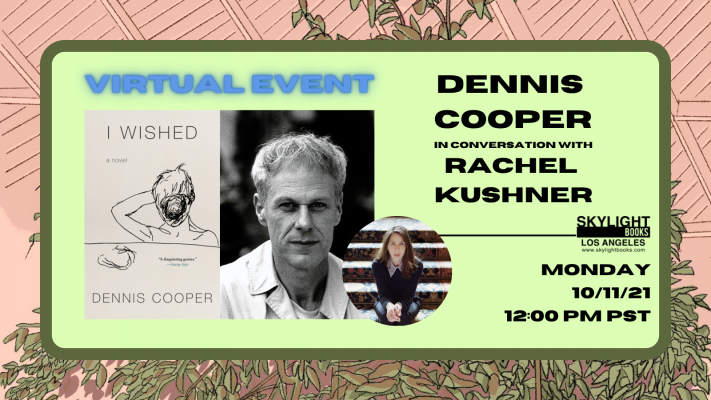 “I started writing books about and for my friend George Miles because whenever I would speak about him honestly like I am doing now I felt a complicated agony beneath my words that talking openly can’t handle.”
For most of his life, Dennis Cooper believed the person he had loved the most and would always love above all others was George Miles. In his first novel in ten years, Dennis Cooper writes about George Miles, love, loss, addiction, suicide, and how fiction can capture these things, and how it fails to capture them. Candid and powerful, I Wished is a radical work of shifting forms. It includes appearances by Santa Claus, land artist James Turrell, sentient prairie dogs, John Wayne Gacy, Nick Drake, and George, the muse for Cooper’s acclaimed novels Closer, Frisk, Try, Guide, and Period, collectively known as “The George Miles Cycle.” In revisiting the inspiration for the Cycle, Dennis has written a masterwork: the most raw, personal, and haunted book of his career.

Dennis Cooper is the author of the George Miles Cycle, an interconnected sequence of five novels: Closer, Frisk, Try, Guide, and Period. His other works include My Loose Thread; The Sluts, winner of France’s Prix Sade and the Lambda Literary Award; God Jr.; Wrong; The Dream Police; Ugly Man; and The Marbled Swarm. He divides his time between Los Angeles and Paris. He is the director (with Zac Farley) of Permanent Green Light and Like Cattle Towards Glow.

Rachel Kushner is the author of the internationally acclaimed novels THE MARS ROOM, THE FLAMETHROWERS, and TELEX FROM CUBA, as well as a book of short stories, THE STRANGE CASE OF RACHEL K. Her new book, THE HARD CROWD: ESSAYS 2000-2020 will be published in April 2021. She has won the Prix Médicis and been a finalist for the Booker Prize, the National Book Critics Circle Award, the Folio Prize, the James Tait Black Prize, the Dayton Literary Peace Prize, and was twice a finalist for the National Book Award in Fiction. She is a Guggenheim Foundation Fellow and the recipient of the Harold D. Vursell Memorial Award from the American Academy of Arts and Letters. Her books have been translated into twenty-six languages.