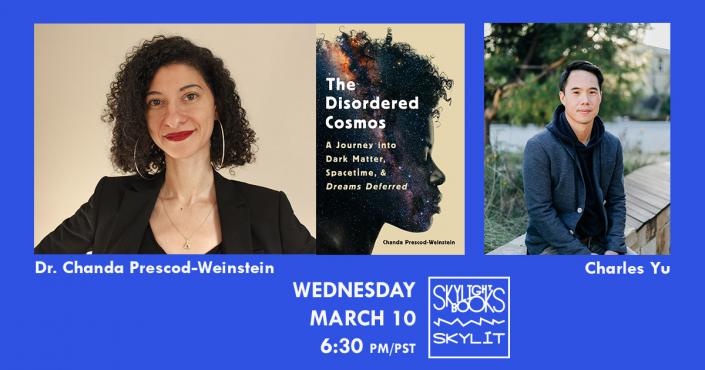 From a star theoretical physicist, a journey into the world of particle physics and the cosmos — and a call for a more just practice of science.

In The Disordered Cosmos, Dr. Chanda Prescod-Weinstein shares her love for physics, from the Standard Model of Particle Physics and what lies beyond it, to the physics of melanin in skin, to the latest theories of dark matter — all with a new spin informed by history, politics, and the wisdom of Star Trek.

One of the leading physicists of her generation, Dr. Chanda Prescod-Weinstein is also one of fewer than one hundred Black American women to earn a PhD from a department of physics. Her vision of the cosmos is vibrant, buoyantly non-traditional, and grounded in Black feminist traditions.

Prescod-Weinstein urges us to recognize how science, like most fields, is rife with racism, sexism, and other dehumanizing systems. She lays out a bold new approach to science and society that begins with the belief that we all have a fundamental right to know and love the night sky. The Disordered Cosmos dreams into existence a world that allows everyone to tap into humanity’s wealth of knowledge about the wonders of the universe.

Chanda Prescod-Weinstein is an assistant professor of physics and astronomy and core faculty in women’s and gender studies at the University of New Hampshire. She is also a columnist for New Scientist and Physics World. Her research in theoretical physics focuses on cosmology, neutron stars, and dark matter, and she is active in Black feminist science, technology, and society studies. Essence magazine recognized her as one of “15 Black Women Who Are Paving the Way in STEM and Breaking Barriers.” She has been profiled in several venues, including TechCrunch, Ms. Magazine, Huffington Post, Gizmodo, Nylon, and the African American Intellectual History Society’s Black Perspectives. A cofounder of the Particles for Justice movement, she has received the 2017 LGBT+ Physicists Acknowledgement of Excellence Award for her contributions to improving conditions for marginalized people in physics, as well as the 2021 American Physical Society Edward A. Bouchet Award for her contributions to particle cosmology.

Charles Yu is the author of four books, including his latest, Interior Chinatown, which won the National Book Award for Fiction and was longlisted for the Andrew Carnegie Medal for Excellence in Fiction. He has been nominated for two Writers Guild of America awards for his work on the HBO series Westworld, and has also written for shows on FX, AMC, Facebook Watch, and Adult Swim. His fiction and non-fiction have appeared in a number of publications including The New Yorker, The New York Times, The Atlantic, Harper's and Wired.

The Disordered Cosmos: A Journey into Dark Matter, Spacetime, and Dreams Deferred (Hardcover)