LIVE ON CROWDCAST: DR. MEERA SHAH discusses her new book YOU'RE THE ONLY ONE I'VE TOLD w/ JULIANNA GUILL 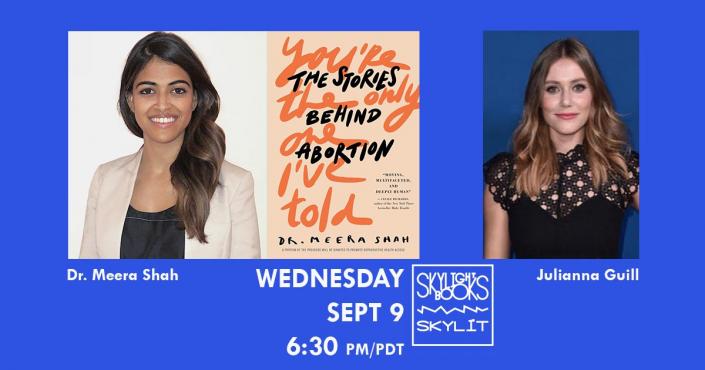 You're the Only One I've Told: The Stories Behind Abortion (Chicago Review Press)

For a long time, when people asked Dr. Meera Shah what she did, she would tell them she was a doctor and leave it at that. But over the last few years, Shah decided it was time to be direct. “I’m an abortion provider,” she will now say. And an interesting thing started to happen each time she met someone new. One by one, people would confide—at barbecues, at jury duty, in the middle of the greeting card aisle at Target—that in fact they’d had an abortion themselves. And the refrain was often the same: You’re the only one I’ve told. This book collects those stories as they’ve been told to Shah to humanize abortion and to combat myths that persist in the discourse that surrounds it. An intentionally wide range of ages, races, socioeconomic factors, and experiences shows that abortion always occurs in a unique context. Today, a healthcare issue that’s so precious and foundational to reproductive, social,  and economic freedom for millions of people is exploited by politicians who lack understanding or compassion about the context in which abortion occurs. Stories have power to break down stigmas and help us to empathize with those whose experiences are unlike our own. They can also help us find community and a shared sense of camaraderie over experiences just like ours. You’re the Only One I’ve Told will do both.

"You're the Only One I’ve Told boldly breaks the silence around abortion that has served as a weapon for denying human rights and health care for far too long. Meera Shah places a wide range of engrossing abortion stories in their social, legal, and political contexts and spotlights the unjust toll restrictions on abortion access inflict. Her much-needed reproductive justice lens shows that abortion is not a cure for poverty and other structural inequities but is absolutely essential to ensuring freedom and equality. An illuminating and inspiring call for reproductive freedom for everyone." —Dorothy Roberts, author of Killing the Black Body

"A clear-eyed and shame-free examination from a doctor on the frontlines, You're the Only One I've Told is the book the feminist movement has been waiting for. Everyone should read it." —Jessica Valenti, columnist and author of Sex Object: A Memoir

“The courage and honesty in the writing of Dr. Meera Shah paints the clearest of pictures: abortion isn’t a political tool. It is health care. Personal, moving and necessary - truly a must read”” —Alyssa Mastromonaco, New York Times bestselling author and cohost of Crooked Media’s #Hysteria podcast

"Through these compelling stories, Dr. Shah reveals the determination and the deliberations of people who seek abortion care. This book shows, as my research has confirmed, that people make the decision to end a pregnancy balancing their own responsibilities and visions for the future. With Dr. Shah as our guide, we see the compassion and thoughtfulness of people who dedicate their careers to providing abortions." —Diana Greene Foster, PhD, author of The Turnaway Study

"To declare “I own my body” is revolutionary. To say “I count” is revolutionary. We do that by sharing our stories. And when our stories come together they create a subversive wave that sweeps away shame and silence. In this vital book, Dr. Meera Shah gifts her confidants - the storytellers - and us - the reader - with that power. Read this book." —Mona Eltahawy, author of The Seven Necessary Sins For Women and Girls

"You're the Only One I've Told goes far beyond the headlines and political rhetoric to paint a moving, multifaceted, and deeply human picture of abortion. Dr. Meera Shah blends medical expertise and facts with personal accounts, resulting in a book that is as eye-opening as it is compelling." —Cecile Richards, author of Make Trouble

"Readers who have felt isolated or stigmatized in talking about their own abortions will find stories that resonate, while others will have their concept of who seeks an abortion broadened. This is a moving and deeply informed argument for abortion as a human right." —Publishers Weekly

Dr. Meera Shah is a family medicine physician currently serving as the chief medical officer of Planned Parenthood Hudson Peconic in New York. Shah is a strong advocate for increasing sexual and reproductive health access in underserved areas and to underserved communities. A Fellow with the Physicians for Reproductive Health, Shah is dedicated to calling out the injustices that keep people from exercising their autonomy. In 2018, she was awarded Woman of Distinction by New York State Senator Brad Hoylman.

Julianna Guill is an actress, producer, director and mother living in Los Angeles with nearly sixty credits to her name Julianna has appeared in numerous films and television programs including Girlfriends’ Guide To Divorce, Glory Daze, The Mindy Project, Community, Crazy Stupid Love, Captain America: Civil War, Grounded for Christmas, recurring most recently as Jesse Nevin in FOX’s The Resident. In 2019 Julianna produced and directed her first short film, SILENT DATE, starring Brittany Ross and Martin Starr. Julianna is involved with numerous community non-profit organizations, including her work as a steering committee member on the UNICEF NextGeneration Los Angeles board.

You're the Only One I've Told: The Stories Behind Abortion (Hardcover)