LIVE ON CROWDCAST: ED LIN launch his new book DAVID TUNG CAN'T HAVE A GIRLFRIEND UNTIL HE GETS INTO AN IVY LEAGUE COLLEGE, with CHRIS L. TERRY 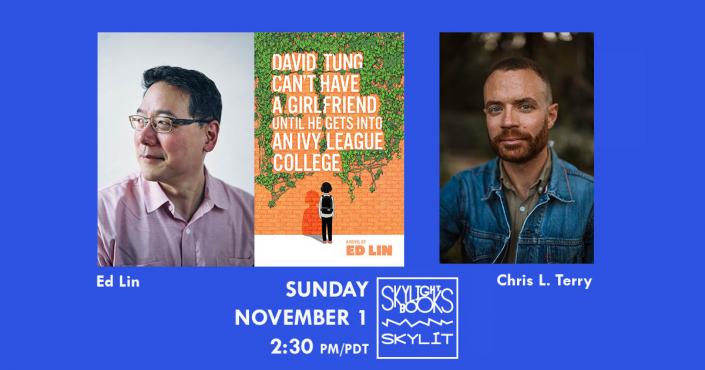 *Please note: This event will take place live on Crowdcast. RSVP here to join the livestream or watch the replay!

"You're not allowed to have a girlfriend until college," my mother warned. "And you'd better get into an Ivy League school "

In David Tung Can't Have a Girlfriend Until He Gets Into an Ivy League College, novelist Ed Lin conjures up "a fast-paced, acid-tongued, hilarious teen drama for our age," says Marie Myung-Ok Lee, acclaimed author of Somebody's Daughter and Finding My Voice. Both playful and wryly observant, Ed Lin's YA-debut explores coming-of-age in the Asian diaspora while navigating relationships through race, class, and young love. David Tung, our nerd-hero, is a Chinese American high-school student who works in his family's restaurant, competes for top grades at his regular high school located in an upscale, Asian-majority New Jersey suburb, and attends weekend Chinese school in NYC's working-class Chinatown. While David faces parental pressures to get As and conform to cultural norms and expectations, he's caught up in the complicated world of high school love triangles--and amid these external pressures is the fear he will die alone, whether he gets into Harvard or not!

"I cringed, I cheered, I wished this book had been there for me as a teen." --Jung Kim

"A beautifully observed, hilariously truthful, uplifting coming-of-age story that captures the heart and humanity of a Chinese American male teenager. I am impressed and inspired by Ed Lin’s achievement and wish I could’ve read this book when I was in high school." --David Henry Hwang

"Ed Lin's New Jersey is entirely Chinese American and way, way more complex and threatening than the Soprano's version of NJ. There are rich Chinese, really rich Chinese, Ivy League Chinese, super educated Chinese, and then there's David Tung who has never been on airplane, works in his family's Chinese restaurant, and ranks a shameful (according to his mother) number eight academically in his school. For Chinese American readers who survived high school, it's a hive-inducing horror movie from our past." --Shawn Wong

"You’ll fall hard for David Tung, a high-achieving teen with a heart of gold. Lin writes with a keen sense of character; even the most minor characters spring alive off the page." --Sheba Karim

"David Tung is a nerd-hero readers will cheer on to the end." --Marie Myung-Ok Lee

Ed Lin, a journalist by training, is the author of several award-winning books, including: Waylaid, his literary debut; the Robert Chow crime series, set in 1970s Manhattan Chinatown (This Is a Bust, Snakes Can’t Run and One Red Bastard); and the Taipei Night Market crime series (Ghost Month, Incensed and 99 Ways to Die). Lin is the first author to win three Asian American Literary Awards. He lives in New York with his wife, actress Cindy Cheung.

Chris L. Terry is the author of the novel Black Card, about a mixed-race punk bassist with a black imaginary friend. NPR called Black Card, "hilariously searing" and listed it as one of the best books of 2019. Terry's debut novel Zero Fade was on Best of 2013 lists by Slate and Kirkus Reviews, who called it, "Original, hilarious, thought-provoking, and wicked smart...not to be missed” in a starred review.

Terry was born in 1979 to a black father and white mother. He lives in Los Angeles, where he teaches creative writing and works as a screenwriter. His work has appeared in Best Small Fictions 2015, PANK, Very Smart Brothas/The Root, Apogee, Razorcake, and more.

This Is a Bust (Paperback)