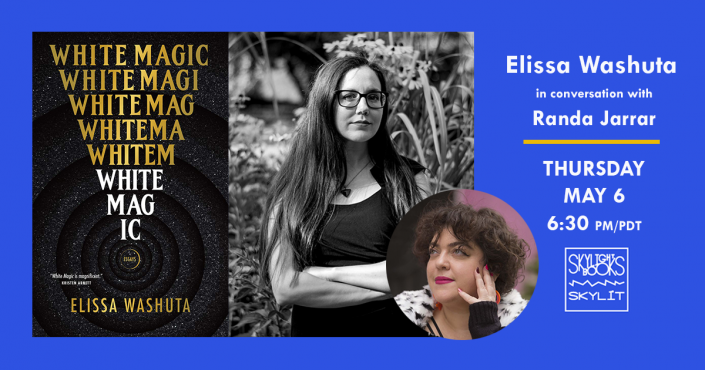 Throughout her life, Elissa Washuta has been surrounded by cheap facsimiles of Native spiritual tools and occult trends, “starter witch kits” of sage, rose quartz, and tarot cards packaged together in paper and plastic. Following a decade of abuse, addiction, PTSD, and heavy-duty drug treatment for a misdiagnosis of bipolar disorder, she felt drawn to the real spirits and powers her dispossessed and discarded ancestors knew, while she undertook necessary work to find love and meaning.

In this collection of intertwined essays, she writes about land, heartbreak, and colonization, about life without the escape hatch of intoxication, and about how she became a powerful witch. She interlaces stories from her forebears with cultural artifacts from her own life—Twin Peaks, the Oregon Trail II video game, a Claymation Satan, a YouTube video of Stevie Nicks and Lindsey Buckingham—to explore questions of cultural inheritance and the particular danger, as a Native woman, of relaxing into romantic love under colonial rule.

“Elissa Washuta’s newest collection of essays is coming out in 2021—and they may be exactly what you need right now.” —O, The Oprah Magazine

“In this potent, illuminating memoir in essays, Elissa Washuta, a member of the Cowlitz Indian Tribe, digs into her relationship with magic and the occult. . . . Touching on love, heritage, identity, and faith, White Magic is resonant and weighty.” —BuzzFeed

“A fascinating magic trick of a memoir that illuminates a woman’s search for meaning.” —Kirkus, Starred Review

“Washuta’s frank confrontations with, and acknowledgments of, unhealed wounds are validating. . . . evoking the sense of peeling open a letter from an estranged friend. A poignant work by a rising essayist.” —Foreword Reviews, Starred Review

“Her prose is crisp and precise, and the references hit spot-on. . . . Fans of the personal essay are in for a treat.” —Publishers Weekly

“Powerful. . . . Washuta’s essays refuse the mandate of a tidy resolution. Instead she circles around each subject, inspecting it as symbol, myth, metaphor, and reality, all while allowing her readers space to draw their own conclusions, or to reject the need for any conclusion at all. Like a stage magician, she asks readers to look again. White Magic is an insightful, surprising, and eloquent record of stories of magic and the magic in stories.” —Booklist

Elissa Washuta is a member of the Cowlitz Indian Tribe and a nonfiction writer. She is the author of Starvation Mode and My Body Is a Book of Rules, named a finalist for the Washington State Book Award. With Theresa Warburton, she is co-editor of the anthology Shapes of Native Nonfiction: Collected Essays by Contemporary Writers. She is an assistant professor of creative writing at the Ohio State University.

Randa Jarrar is the author of the memoir Love Is An Ex-Country, the novel A Map of Home, and the collection of stories Him, Me, Muhammad Ali. She is also a performer who has recently appeared in Hulu’s RAMY, as well as the short films GOT GAME and FINJAN. Her essays have appeared in The New York Times Magazine, Salon, Bitch, Buzzfeed, and elsewhere. She is a recipient of a Creative Capital Award and an American Book Award, as well as awards and fellowships from the Civitella Ranieri Foundation, the Lannan Foundation, Hedgebrook, PEN, and others. She lives in Los Angeles.

My Body Is a Book of Rules (Paperback)

Him, Me, Muhammad Ali (Paperback)