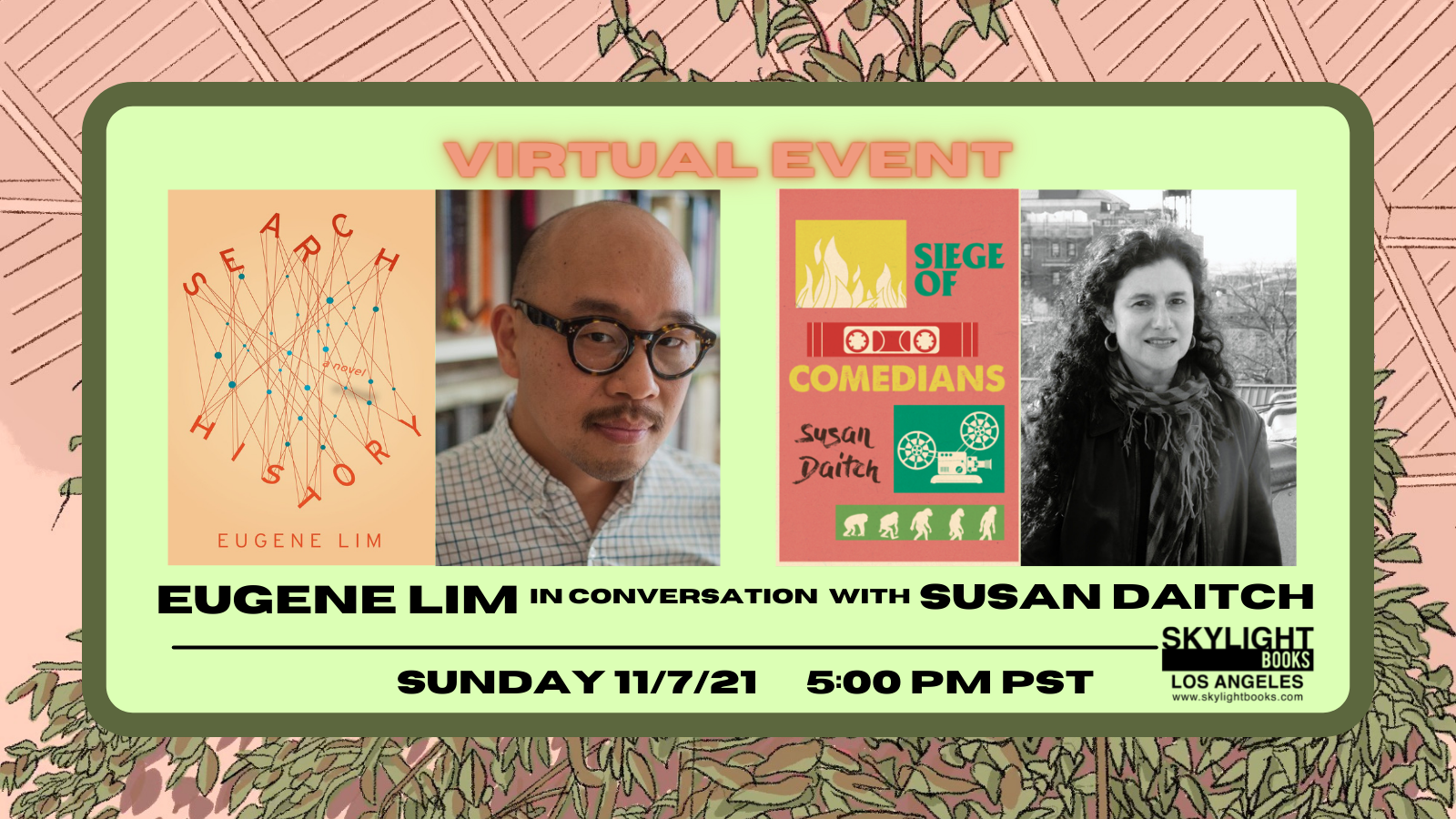 Frank Exit is dead—or is he? While eavesdropping on two women discussing a dog-sitting gig over lunch, a bereft friend comes to a shocking realization: Frank has been reincarnated as a dog! This epiphany launches a series of adventures—interlaced with digressions about AI-generated fiction, virtual reality, Asian American identity in the arts, and lost parents—as an unlikely cast of accomplices and enemies pursues the mysterious canine. In elliptical, propulsive prose, Search History plumbs the depths of personal and collective consciousness, questioning what we consume, how we grieve, and the stories we tell ourselves.

Eugene Lim is the author of the novels Fog & Car (Ellipsis Press, 2008), The Strangers (Black Square Editions, 2013), and Dear Cyborgs (FSG Originals, 2017). His writings have appeared in the Brooklyn Rail, the Baffler, Dazed, Fence, Little Star, Granta, and elsewhere. He is a high school librarian, runs Ellipsis Press, and lives in Queens, New York, with Joanna and Felix.

Award-winning author Susan Daitch returns with Siege of Comedians, a novel in triptych told through interconnected threads pulled taut by crimes long ago relegated to history.

In the first piece, an American forensic sculptor, reconstructing the faces of three victims receives a midnight, visit from a man who threatens her life unless she alters the faces she’s almost completed. The twists and turns of the mystery lead her to a new life, working with forensic archeologists at a site near the Prater amusement park in Vienna.

In the second section, an accent coach discovers that the man implicated in the death of his girlfriend in 1970s Buenos Aires was once a censor and Assistant Minister of Propaganda in Vienna during World War II. When bodies start turning up under the former Propaganda offices, some date from the war period—but others are much older, their origins going back to the Ottoman siege of Vienna.

In the final arc, in the aftermath of the last battle between the Austrians and the Turks, a local businesswoman finds three displaced women from Istanbul—former wives of the sultan—wandering in Vienna and gives them shelter in her brothel, located on the site of the future Ministry of Propaganda.

After graduating from Barnard College, Susan Daitch attended the Whitney Museum Independent Study Program. She has published five novels and a collection of short stories. Her short fiction and essays have appeared in Black Clock, Guernica, Conjunctions, Slice, Tablet, Tin House, McSweeney’s, Bomb, The New England Review, TriQuarterly, ReDivider, The Norton Anthology of Postmodern American Fiction, and elsewhere. Daitch was a recipient of a New York Foundation for the Arts Fellowship in Fiction, two Vogelstein fellowships, two Pushcart Prize nominations, and was the Eli Cantor fellow at Yaddo. Fall Out, a novella, was published by Madras Press, all proceeds donated to Women For Afghan Women.

“As befits a book dealing with death and rebirth, the novel oscillates between the uncanny and the philosophical. . . . Lim brings together the mundane and the extraordinary to powerful effect.” —Kirkus, starred review

“A rabbit hole of grief and humor in equal measure. . . . Eugene Lim collages it all together masterfully. Suffice to say, it’s hard to describe to you exactly what happens in these gleefully experimental pages, but I will say this: It sort of feels like Italo Calvino’s If on a winter’s night a traveler and Jeanette Winterson’s Frankissstein had a baby that inherited its parents’ obsessions with storytelling and technology and their penchant for playfulness.” —Katie Yee, Literary Hub

“‘Pure Art’ is the theme, plot, and struggle of the haunted characters in Eugene Lim's novels. But book after book, pure art is what Eugene Lim makes. Every time I see a new Eugene Lim book on the shelves, I'm grateful. Looking for hope amid our capitalist doom, I read Search History with that exhilarating comfort I've felt in the best artists of their times, Petronius to Perec, Rabelais to Rizal—all of whom demonstrate a bracing commitment to challenging our ideological norms by testing without fear our art’s forms. Surveying our planetary wreck on Eugene Lim’s craft is to see our survival more clearly—through friendship’s grief, through love’s quest, through the bereaved trust that survivors must sustain in art.” —Gina Apostol

“Search History, Eugene Lim's new masterpiece, is a novel of such richness, inventiveness, and strangeness that it rewards multiple readings. Lim has found a way to capture both the pointed specificity of the internet and its Borgesian infiniteness, in order to tell a picaresque tale about race and American culture, artificial intelligence, artmaking, storytelling, and so much more. Oh, and then this is also a novel about a dog! Search History is utterly original, from its opening pages to its final sentences.” —John Keene

“Eugene Lim’s forthcoming Search History is a thoroughly unconventional novel that explores the depths of human emotion with ingenuity and style. Readers will be kept on their toes by its disconcerting narrative structure. The story alternates conversations between the narrator and friends that delve deep into the terrain of the philosophical—specifically questioning the subject position of artists of color—with a hijinks-filled quest to reclaim a dog believed to be the reincarnated form of a dead loved one. Lim’s devilish satire lends the story a sheen of humor and playfulness that does not detract from its vulnerability and profound meditations on the continuous processes of grieving and contending with one’s identity. Search History is a luminous, peerless work that establishes Lim as one of the best-suited authors to write about our distinct moment of environmental decay amidst technological advancement. A heartfelt delight from start to finish.” —Meghana Kandlur

Praise for Siege of Comedians:

“Ebullient ... Daitch finds stimulating connections and writes with sharp irony and joy. This offers delights on every page.” —Publishers Weekly

"A moving and powerful work of art that examines mystery, identity, and displacement. Like DeLillo and Spiotta at their best, Susan Daitch is a master of style here, threading the atmospheric with the suspenseful, the strange with the mundane, and she manages to bring everything together in the end with a big payoff. One of the most exciting, original writers working today.” —Brandon Hobson, National Book Award finalist and author of The Removed

“Daitch’s singular genius is to take from its grimed and cobwebbed neglect what might be called the palimpsest of history and selectively restore its lines and erasures until, to our horror and delight, we begin to recognize ourselves. Siege of Comedians is a brilliant and enthralling novel, a noir diamond reflective of our collective dark history and formed under the weight of a million missing-persons cases.” —Eugene Lim, author of Dear Cyborg

“Siege of Comedians is a book for our age and beyond, ranking in the bright realm of Ishiguro, Ondaatje, Rhys. Daitch sparks her reader with concerns deep and global, her sentences incredible as a panther’s run through beautiful and brutal fields.” —Edie Meidav, author of Crawl Space and Future Love Paradise

“Brimming with mystery and graced by Daitch’s assured, wry touch, Siege of Comedians is a New York novel for the twenty-first century.” —John Keene, author of Counternarratives