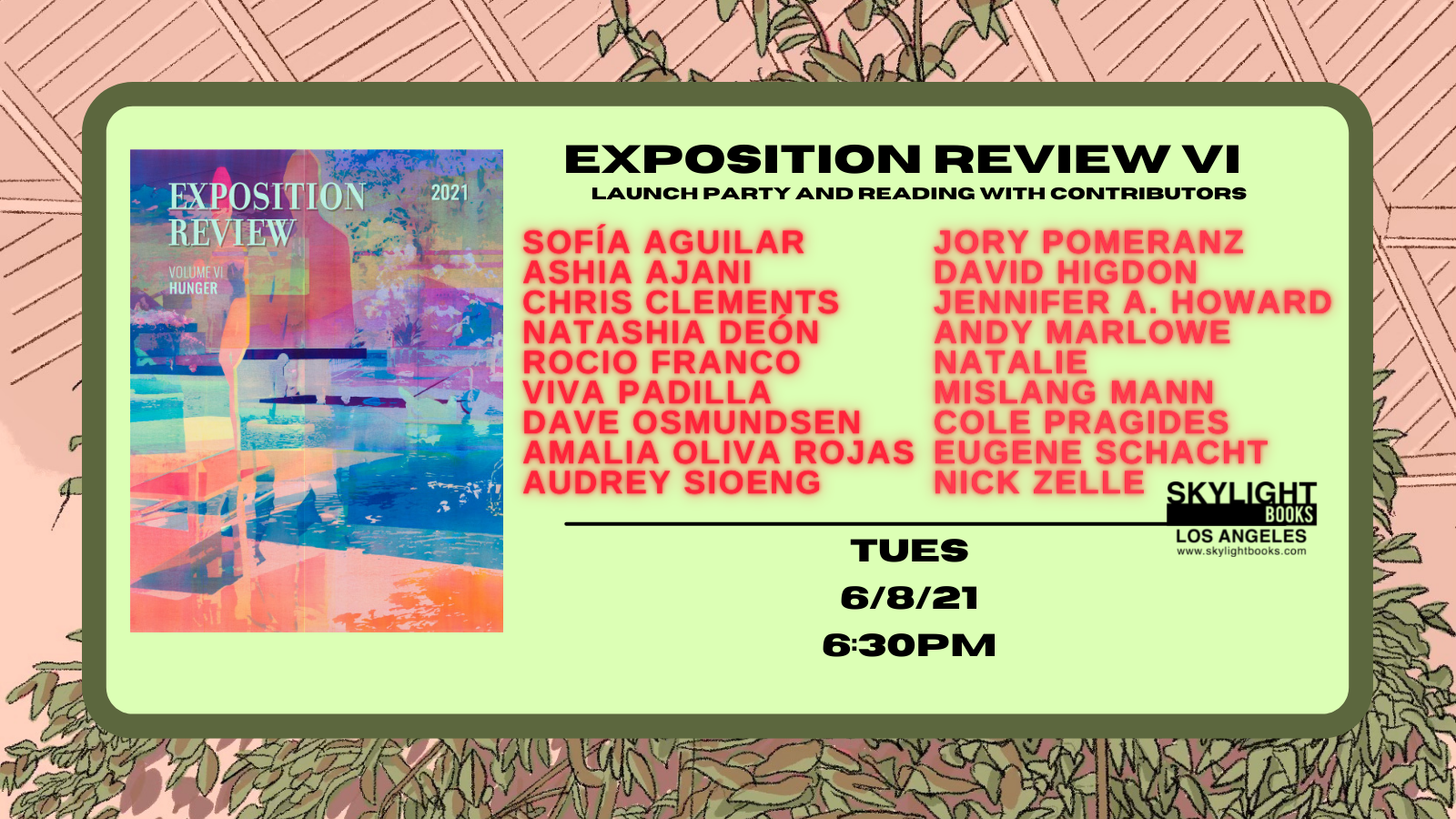 Join Exposition Review as we celebrate our latest issue, Vol. VI: "Hunger" with readings from our contributors!

Exposition Review is also dedicated to creating opportunities for writers and artists to share their voices through our annual issue, Flash 405 contests, and #ExpoPresents events, which include staged readings, panels, and our signature micro-workshops in locations throughout Southern California (and beyond). We develop new projects and events to benefit the Los Angeles literary community and also publish the podcast Transposition and the Expo Blog.

Sofía Aguilar, originally from Los Angeles, is a Latina writer, editor, and senior at Sarah Lawrence College. Most recently, her work has appeared in Unpublished Magazine, Melanin. Magazine, and The Westchester Review, among other publications. An alum of WriteGirl, she has received the 2018 Nancy Lynn Schwartz Prize for Fiction and is a three-time recipient of the Jean Goldschmidt Kempton Scholarship for Young Writers for her outstanding contributions to her college community. You can follow her on Instagram and Twitter @sofiaxaguilar or find her at sofiaaguilar.com.

Ashia Ajani (they/she) is a Black environmental educator and storyteller hailing from Denver, CO, Queen City of the Plains and the unceded territory of the Arapahoe, Ute, Cheyenne and Comanche peoples. Their work has been featured in Sierra Magazine, Them.us, Frontier Poetry, World Literature Today, among others. She is currently located in New Haven, CT where she is completing her Master's of Environmental Management at Yale School of the Environment. Per the underrated Stevie Wonder song, they hope to "come back as a flower" in the next life.

Chris Clements is an undergraduate English major at Arizona State University. His fiction has been published in Lux Undergraduate Creative Review, which is produced with the help of Barrett, The Honors College at ASU. He has received the Jules J. Anatole Creative Writing Scholarship from ASU for his fiction writing.

Natashia Deón is an NAACP Image Award Nominee, practicing criminal attorney, and college professor at UCLA and Antioch University. Author of the critically acclaimed novel, GRACE, which was named a Best Debut Fiction by The American Library Associations, Black Caucus and was named Best Book by the New York Times, Deón is also a wife, mother of two, and her new novel, The Perishing, is due out in 2021. Deón was a 2017 U.S. Delegate to Armenia as part of the U.S. Embassy’s reconciliation project between Turkey and Armenia in partnership with the University of Iowa and is a Pamela Krasney Moral Courage Fellow. In that role, she founded REDEEMED, a criminal record clearing and clemency project that pairs writers with those who have been convicted of crimes. A PEN America Fellow, Deón has also been awarded fellowships and residencies at Yale, Prague’s Creative Writing Program, Dickinson House in Belgium and the Virginia Center for Creative Arts. She has been featured in TIME Magazine, PeopleMagazine, The Root,Red Book, The New York Times,The Los Angeles Times,American Short Fiction, Buzzfeedand other places.

Rocio Franco is a Latinx poet and activist from Chicago, IL. She is a 2020 Frost Conference on Poetry Alum, her poems have appeared in The Acentos Review, and her poems recently appeared in the inaugural Fire Season issue for The Outpatient Press. She works as a health insurance counselor at a non-profit union health fund and strongly believes in universal healthcare. She loves exploring the city with her husband and daughter on the weekends, practicing Brazilian Jiu Jitsu, and approaches the world with a social justice lens.

David Higdon lives with his family in Louisville, Ky. He works as a writer and graphic designer.

Jennifer A. Howard teaches and edits Passages North in Michigan's snowy Upper Peninsula. Her collection of flash sci-fi, You on Mars, was published by The Cupboard Pamphlet, and she has a new chapbook of dispatches from one kid's Flat Stanley coming out in 2021.

Andy Marlowe is an artist, author, and anchorite who lives and creates in the Florida Panhandle. Their website is andymarlowe.com

Natalie Mislang Mann is an educator who holds a Master of Arts in Humanities from San Francisco State University. Before being selected as a 2018 PEN America Emerging Voices fellow, she attended VONA/Voices and Tin House Summer Workshops. Her writing has appeared in Angel City Review, The Rattling Wall, and the anthology Only Light Can Do That. Natalie is currently working on a memoir based on her experiences growing up in a multi-ethnic family in the San Fernando Valley at the Bennington Writing Seminars.

Dave Osmundsen (He/Him/His) is a queer and autistic playwright whose work explores the intersection of neurodiversity and queerness. His work has been seen and developed at KCACTF Region 8, the Kennedy Center/NNPN MFA Playwrights Workshop, B Street Theatre, the William Inge Theatre Festival, the Midwest Dramatists Conference, and more. His play Light Switch was the 2021 Distinguished Achievement recipient of the Jean Kennedy Smith Playwriting Award. His plays have been published by or are forthcoming in The Dionysian, Canyon Voices, and Exposition Review. He is a resident playwright with Spectrum Theatre Ensemble, a neurodiverse theatre company based in Providence, RI.

Viva Padilla is a bilingual poet, writer, editor, and publisher born and raised in South Central Los Angeles. She’s the founding editor in chief of Dryland, an independent print literary journal established in 2015, and Hombre Lobo, an intergenerational book series documenting paranormal/ supernatural stories experienced by Xicanx. Padilla is a first-generation Chicana, a daughter of immigrants who crossed the border from Colima, Mexico. She also runs FUTURE NOW, a virtual Black and Brown reading and open mic series. She’s been an invited speaker at universities like CSU Dominguez Hills, CSU Fullerton, and international cultural institutions like Casa de las Americas in Havana, Cuba. Viva’s work has been featured or is forthcoming in the L.A. Times, The Acentos Review,  PANK, wearemitú, SAND, The Autry Museum, L.A. Forum for Archictecture and Urban Design, and The X LA Poets anthology and others. She currently works at Tia Chucha Press and lives on the Eastside in Los Angeles.

Jory Pomeranz worked as a chef for eight years. He currently lives in Cincinnati, Ohio. He writes about the service industry, which he left to pursue medicine after a horrendous bus accident in New York City.

Cole Pragides is an aspiring Asian-American teenage writer at the University of Colorado, Boulder. He is studying Environmental Engineering and Creative Writing. You can probably find him tending to his houseplants and herb garden.

Amalia Oliva Rojas is a Mexican poet, and theater artivist based in New York. Her work explores and centers the stories, myths, and legends of immigrant women and the BIPOC community. Recent credits include LEO AND FRIENDS (Theater Accident) and Cam Girl Dreamz (3 x 10 Play Festival). She is an alumnus of the Vassar College Powerhouse Theater Apprentice Program and Pen America’s DREAMING OUT LOUD writing workshop. Residencies Include New Perspectives Theater Company Women’s Work Short and Full-Length Play Lab, NYU Hemispheric Institute for Performance and Politics, EmergeNYC Program. In addition to her playwriting, Amalia has contributed to several online magazines such as City limits, Popula, La Revista De La Universidad De México.  Amalia is a member of the Mycelial Artist Collective which will be in residence at Governors Island this summer 2021 in collaboration with The Beam Center.

Eugene Schacht resides in Washington, DC. He holds an MFA in Creative Writing from American University, and he is a member of the ever-insightful and supportive MetroWriders writing group (obligatory leopard fist). Most importantly, he adores his wife, Rachel, and loves her to the end of the earth and back. He is forever thankful for the home they share with their four cats.

Audrey Sioeng is a junior in high school who, when not getting lost in another book or freaking out about college, can be found gushing to her friends and family about her latest obsession. Most common subjects of said fangirling are her latest read, various Chinese dramas, and music. Currently, Audrey is focusing more on her schoolwork, crushing her family in mahjong, and updating her blog for young writers (Sprouting Ink), but hopes to submit more of her work for publication soon!

Nick Zelle is a longtime circus artist based in Minneapolis. His critical writing on Contemporary Circus culture can be found on Cirkus Syd.