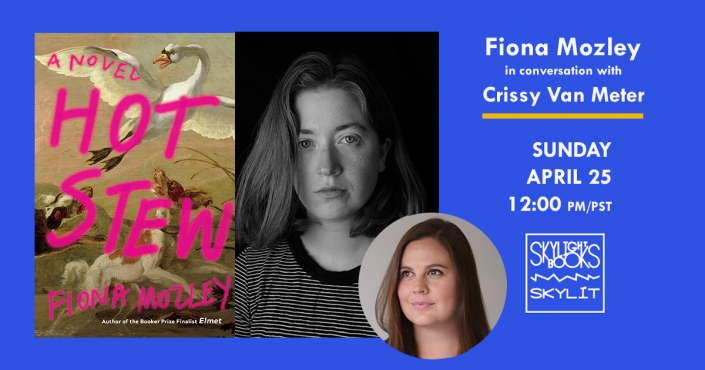 FROM THE AUTHOR OF THE BOOKER PRIZE FINALIST ELMET

Named One of the Most-Anticipated Books of 2021 by:
The Millions, BuzzFeed, The Stylist, The Guardian, and more

Brilliant young British writer Fiona Mozley turns her keen eye from the gothic woods of Yorkshire to the streets and pubs and cafés of contemporary London in this much-anticipated follow-up to her debut novel, Elmet.

In the middle of the bustle of Soho sits a building. It isn’t particularly assuming. But it’s a prime piece of real estate, and a young millionaire, Agatha Howard, wants to convert it into luxury condos as soon as she can kick out all the tenants.

The problem is, the building in question houses a brothel, and Precious and Tabitha, two of the women who live and work there, are not going to go quietly. And another problem is, just where did Agatha’s fortune come from? The fight over this piece of property also draws in the men who visit, including Robert, a one-time member of a far-right group and enforcer for Agatha’s father; Jackie, a policewoman intent on making London a safer place for all women; Bastian, a rich and dissatisfied party boy who pines for an ex-girlfriend; and a collection of vagabonds and strays who occupy the basement. As these characters—with surprising hidden connections and shadowy pasts—converge, the fight over the property boils over into a hot stew.

Entertaining, sharply funny, and dazzlingly accomplished, Hot Stew confronts questions about wealth and inheritance, gender and power, and the things women must do to survive in an unjust world.

“Set in present-day London, Mozley’s anticipated follow-up to Elmet—her Booker Prize shortlisted debut—follows the struggle between the haves and the have-nots over a building. Mozley’s newest novel explores themes like wealth, gentrification, power, and gender dynamics.”
—The Millions, “Most Anticipated: The Great First-Half 2021 Book Preview”

​“A dazzling Dickensian tale . . . [Mozley] has reinvigorated large-scale social realism for our times.”
—The Guardian

“Fiona Mozley’s hypnotic debut, Elmet, was a standout novel of 2018. Her much-anticipated follow-up takes place in London’s Soho, where a young millionaire intent on converting an old building into luxury condos finds out the hard way that its tenants—specifically two sex workers whose brothel is based in the building—won’t leave without a fight.”
—BuzzFeed, "75 Books To Add To Your 2021 TBR List”

“Deftly exploring a very real clash of cultures, this is a funny and smart book.”
—The Stylist, “Best New Fiction for 2021”

“A complex mosaic of urban life . . . The Soho Mozley captures with such intensity is not a mere locality. It is a microcosm of swarming humanity. Change is, of course, a constant, but Mozley's Hot Stew arrives like a clarion call to take up arms not against change per se, but against the homogenisation that so slowly but steadily suppresses it.”
—The Times of London

“[Elmet] was steeped in the legends of the Yorkshire countryside, but Hot Stew proves Mozley is equally well attuned to the rhythms of urban life. This is a compelling snapshot of a city teeming with vitality, a love letter to, as one character puts it, “the sense of being at the
centre of things,” and a reminder of what London stands to lose if its stories are wiped out in pursuit of profit.”
–Evening Standard (UK)

“A rollicking tale of pimps and prostitutes, property and posterity.”
—The Observer

“At its best, it recalls the kind of capacious, rollicking satires Britain produced in and around the Thatcher era—ambitious, scathing and damn good fun.”
—TLS

“Where the mystical, elemental qualities of Elmet earned it comparisons with Lawrence and Hardy, her second novel is a sprawling urban comedy more likely to recall Ben Jonson or Dickens… [Mozley] moves easily between mordant satire and warmly eccentric character comedy in this invigorating trumpet blast against London's increasing homogenisation.”
—Daily Telegraph

“A passionate and bruising take on the side effects of an increasingly unequal world, in which the rich and the poor function on alarmingly separate if parallel planes.”
—Booklist

“Mozley leaves the Yorkshire countryside of her Booker-shortlisted Elmet for the gritty streets of London in this lively contemporary Dickensian outing set in a Soho brothel… Mozley’s ambition and vision make this a worthy effort.”
—Publisher’s Weekly

Fiona Mozley was born in East London and raised in York, in the North of England. She studied history at Cambridge and then lived in Buenos Aires and London, working at a literary agency and at a travel center. Her first novel, Elmet, was shortlisted for the Man Booker Prize in 2017. She lives in Edinburgh with her partner and their dog.

Crissy Van Meter grew up in Southern California. Her writing has appeared in Vice, Bustle, Guernica, and Catapult. She holds an MFA in creative writing from the New School. She lives in Los Angeles.