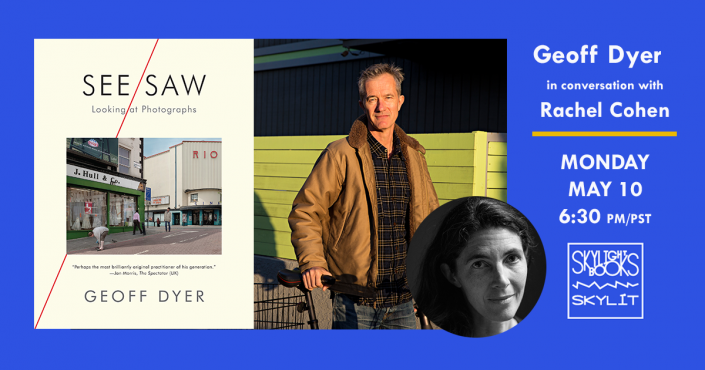 Please note: This event will take place live on Crowdcast. RSVP here to join the livestream or watch the replay.

See/Saw shows how photographs frame and change our perspective on the world. Taking in photographers from early in the last century to the present day—including artists such as Eugène Atget, Vivian Maier, Roy DeCarava, and Alex Webb—the celebrated writer Geoff Dyer offers a series of moving, witty, prescient, surprising, and intimate encounters with images.

Dyer has been writing about photography for thirty years, and this tour de force of visual scrutiny and stylistic flair gathers his lively, engaged criticism over the course of a decade. A rich addition to Dyer’s The Ongoing Moment, and heir to Roland Barthes’s Camera Lucida, Susan Sontag’s On Photography, and John Berger’s Understanding a Photograph, See/Saw shows how a photograph can simultaneously record and invent the world, revealing a brilliant seer at work. It is a paean to art and art writing by one of the liveliest critics of our day.

Geoff Dyer is the recipient of a Lannan Literary Award, the International Center of Photography’s Infinity Award, and the National Book Critics Circle Award. He lives in Los Angeles and teaches at the University of Southern California.

Rachel Cohen is the author of three critically acclaimed books: Austen Years: A Memoir in Five Novels (FSG, 2020), Bernard Berenson: A Life in the Picture Trade, and A Chance Meeting: Intertwined Lives of Writers and Artists, winner of PEN / Jerard Fund Award.  Her essays on artists and writers – their friendships, fallings out, and the work they make – have appeared in publications including the New Yorker, the Guardian, the London Review of Books, Art in America, Apollo Magazine, McSweeney’s and Best American Essays.  Cohen is the recipient of a Guggenheim Fellowship, and she is Professor of Practice in the Arts in Creative Writing at the University of Chicago. She keeps a notebook on looking at paintings at rachelecohen.com.

White Sands: Experiences from the Outside World (Paperback)

The Missing of the Somme (Paperback)