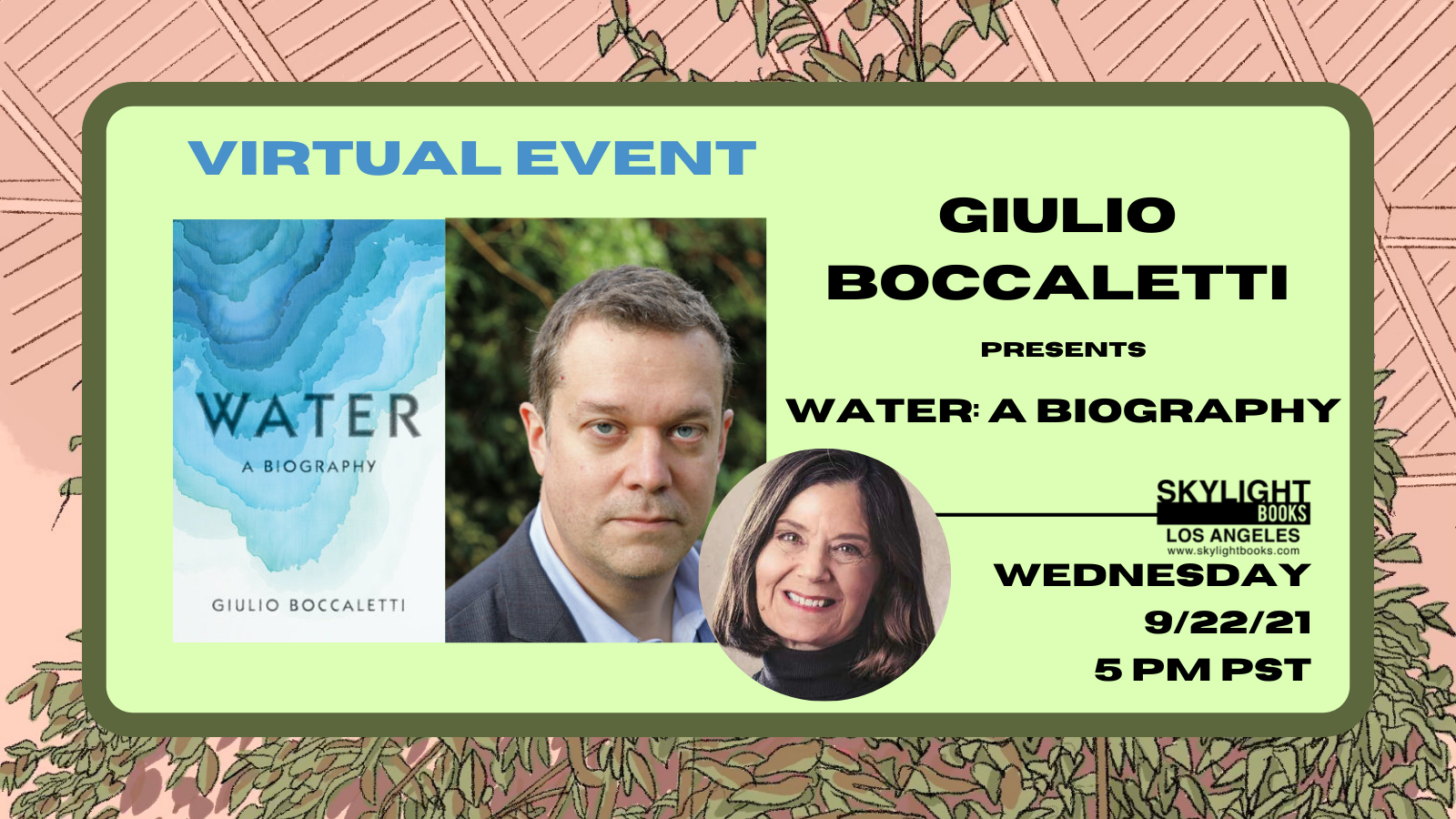 Water is a richly narrated and authoritative work that combines environmental and societal history. Boccaletti begins with the earliest civilizations of sedentary farmers on the banks of the Nile, the Euphrates, and the Yangtze. He describes how these societies developed institutions that responded to changes in climate and sea level, following the last glacial melt. We see how irrigation and flood control interacted with society to influence political systems: how, in Ancient Greece, the distribution of power mapped onto the distribution of water; how Roman water security was inextricably linked to the tax system of the empire. And he makes clear how the modern world as we know it began from that legacy: from a legal system that made possible the systematic development of water infrastructure, and political systems that succeeded in harnessing its power. He shows how the rise of the modern republic is linked to the central role water had in society, and shows how, behind the illusions of technological modernity, humanity’s long, difficult relationship with moving water still shapes today’s politics and economics.

Writing with authority and brio, Giulio Boc­caletti—honorary research associate at the Smith School of Enterprise and the Environment, Univer­sity of Oxford—shrewdly combines environmental and social history, beginning with the earliest civ­ilizations of sedentary farmers on the banks of the Nile, the Tigris, and the Euphrates Rivers. Even as he describes how these societies were made possible by sea-level changes from the last glacial melt, he incisively examines how this type of farming led to irrigation and multiple cropping, which, in turn, led to a population explosion and labor specialization.

We see with clarity how irrigation’s structure informed social structure (inventions such as the calendar sprung from agricultural necessity); how in ancient Greece, the communal ownership of wells laid the groundwork for democracy; how the Greek and Roman experiences with water security resulted in systems of taxation; and how the modern world as we know it began with a legal framework for the development of water infrastructure.

Extraordinary for its monumental scope and piercing insightfulness, Water: A Biography richly enlarges our understanding of our relationship to—and fundamental reliance on—the most elemental substance on earth.

Giulio Boccaletti, Ph.D., is a globally recognized expert on natural resource security and environmental sustainability. Trained as a physicist and climate scientist, he holds a doctorate from Princeton University, where he was a NASA Earth Systems Science Fellow. He has been a research scientist at the Massachusetts Institute of Technology, a partner of McKinsey & Company, and the chief strategy officer of The Nature Conservancy, one of the largest environmental organizations in the world. He frequently writes on environmental issues for news media, and is an expert contributor to the World Economic Forum. His work on water has been featured in the PBS documentary series H2O: The Molecule that Made Us. He lives in London.

Lynn Scarlett is Chief External Affairs Officer at The Nature Conservancy. In this role, she influences climate and conservation policy in the United States and the 72 countries and territories in which TNC operates;  with our Corporate Engagement team, advances private-sector partnerships to support sustainability and enhance ambitious actions to address climate change; and oversees NatureVest, our impact-investing team. Prior to her role at the Conservancy, Lynn was the Deputy Secretary/Chief Operating Officer of the U.S. Department of the Interior, where she also served as Acting Secretary of the Interior in 2006. While Interior’s Deputy Secretary, Lynn initiated and chaired the Department’s Cooperative Conservation Working Group and its first-ever Climate Change Task Force. She established the Interior Department’s Ocean and Coastal activities office and chaired the federal Wildland Fire Leadership Council. She served on the Executive Committee of the President’s Management Council and co-chaired the First Lady’s Preserve America initiative. Lynn is author or co-author of publications on climate change adaptation; ecosystem services; large landscape conservation; and science and decision making. She was a co-convening lead author of the 2014 National Climate Assessment. She chaired the Science Advisory Board of NOAA from 2014-2019 and is a member of the National Academy of Sciences Sustainability Roundtable. She is on the Dean’s Advisory Council of the Bren School of Environmental Science and Management at UC Santa Barbara. She serves on the advisory board of the Cornell Lab of Ornithology, is on the board of trustees of the National Marine Sanctuary Foundation, and board emeritus of the National Wildlife Refuge Association. Lynn received her Bachelor’s and Master’s degrees in political science from the University of California, Santa Barbara, where she also completed her Ph.D. coursework and exams in political science and political economy.

“Boccaletti brilliantly traces the history of how human civilization has been shaped by its attempts to control water for economic and societal benefit. As the impacts of climate change become clearer, policymakers the world over would be well-served to recognize water as a public good, respecting the importance of this invaluable, shared resource to our very survival.”—Sally Jewell, U.S. Secretary of the Interior 2013-17

“Provides essential reading for those seeking to explore how humanity’s relationship with nature has influenced the development of legal and political systems and offers invaluable insights into current debates surrounding climate change and sustainability. I couldn’t recommend it more highly.” —Lee C. Bollinger, President and Seth Low Professor of the University, Columbia University

“Giulio Boccaletti’s book is a remarkable achievement: a readable history of the world, seen through the history of water management. He shows, with clarity and erudition, how this is in reality a political, not a technological issue. Throughout history, humans have tried to conquer water, but water always wins; and it would be better for humanity if we realised it. The book is a real tour de force; it should be essential reading for every politician, as well as the rest of us.” —Chris Wickham, Chichele Professor of Medieval History, University of Oxford

“A masterly, compelling history of the relationship between society and water. It weaves politics, history, and science in a riveting narrative that spans millennia. Giulio Boccaletti has spent years working on water issues at the highest level and it shows. This is a monumental work, which is a must read for anyone wanting to understand the role of water in human history.” —Peter Brabeck-Letmathe, Chairman Emeritus, Nestlé Group

“A leading expert has now shown us he’s also a great storyteller. Giulio Boccaletti tackles the most important story of our time: our relationship with water in a world of looming scarcity.”— Kelly McEvers, NPR Host

“Giulio Boccaletti makes a strikingly original and persuasive case that the history of human civilization can be understood as a never-ending struggle over water. Boccaletti’s command of a vast range of material, across time and space, is astonishing.” — Nicholas Lemann, Joseph Pulitzer II and Edith Pulitzer Moore Professor of Journalism, Columbia University.

“It was an inspired idea to write a ‘biography’ of water and Giulio Boccaletti has carried it off in style. His book is impressively global in scope. It ranges from the earliest human societies to questions of water security in our own time, combining bold lines of argument with compelling examples. Ambitious, assured and very well written, Water: A Biography is an impressive and very welcome addition to the literature.” —David Blackbourn, Cornelius Vanderbilt Distinguished Chair of History, Vanderbilt University.