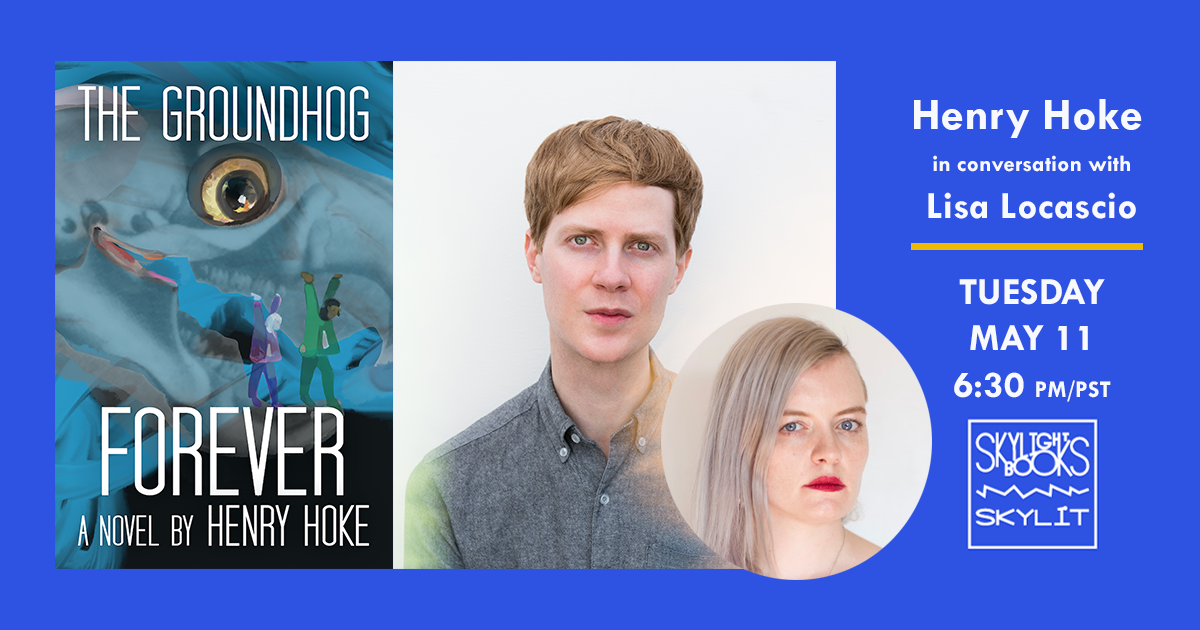 The Groundhog Forever is a queer sequel to the movie “Groundhog Day.” Two film students in post-9/11 Manhattan get stuck reliving the same day over and over together: the day they meet Bill Murray at a screening of “Groundhog Day.” This vicious loop tests the limits of their friendship and forces them to confront the true meaning of artistic immortality. A poetic pop novel with experimental flair. Charlie Kaufman meets Sarah Manguso. Today is the last day of the best of your life.

Henry Hoke wrote The Book of Endless Sleepovers and the story collection Genevieves, which won the Subito prose prize. Recent work appears in The Offing, Electric Literature, Hobart, Carve, and the Catapult anthology Tiny Crimes. He co-created and directs the performance series Enter>text, and has taught at CalArts and the University of Virginia Young Writers Workshop. Sticker, a memoir, is forthcoming in 2022 from Bloomsbury's Object Lessons.

Lisa Locascio’s writing has appeared in The Believer, Tin House, n+1, The New York Times, and many other magazines. She edited the anthology Golden State 2017: Best New Writing from California, and edits the ekphrastic collaboration magazine 7x7LA. Lisa is a core faculty member in the Antioch University Los Angeles MFA in Creative Writing program and Executive Director of the Mendocino Coast Writers’ Conference. Her novel Open Me is available now from Grove Atlantic.

Praise for The Groundhog Forever
“A radiant, shapeshifting novel about fame, friendship, the ecstasy and agony of repetition, and The Divine Bill Murray. In playful, exhilarating prose, Hoke pushes sentential limits, wryly examining the way art marks the world (and the many ways in which it fails to do so). Just when you think you’ve gotten the hang of the spellbinding groundhog logic, the story blooms and swerves and evades, irresistible in its capacity for endless reinvention.”
—Kimberly King Parsons, author of Black Light

“A gorgeous love letter to reality’s unfolding, this beautifully written, magically real adventure paints a lucid, abstract-expressionistic kind-of-a-sensation of being limitless even while standing under the fluorescent lights of the institution.”
—Speed Levitch, author of Speedology

“The Groundhog Forever is that tricky kind of trick: the kind that says it’s just a little fun thing, but then opens up the entire world’s guts and out comes LIFE.  Henry Hoke’s sentences contain teeming cosmos, yet are somehow small enough to hide in your pocket. There’s ancient pathos in the quotidian, groovy earworms in the depths. It’s one day that is infinite, which means it’s also the immeasurable everything of right now.”
—Johanna Hedva, author of Minerva the Miscarriage of the Brain

“Knowing nothing of this novel I began to read it on April 27th, the day after the night I happened to watch again, through no choice of my own, for the first time since childhood, the movie where Groundhog Day nearly never ends:  All this is true and will make sense to you once you have read this multiverse, magic book, too. Such is its power."
—Katherine Faw, author of Ultraluminous